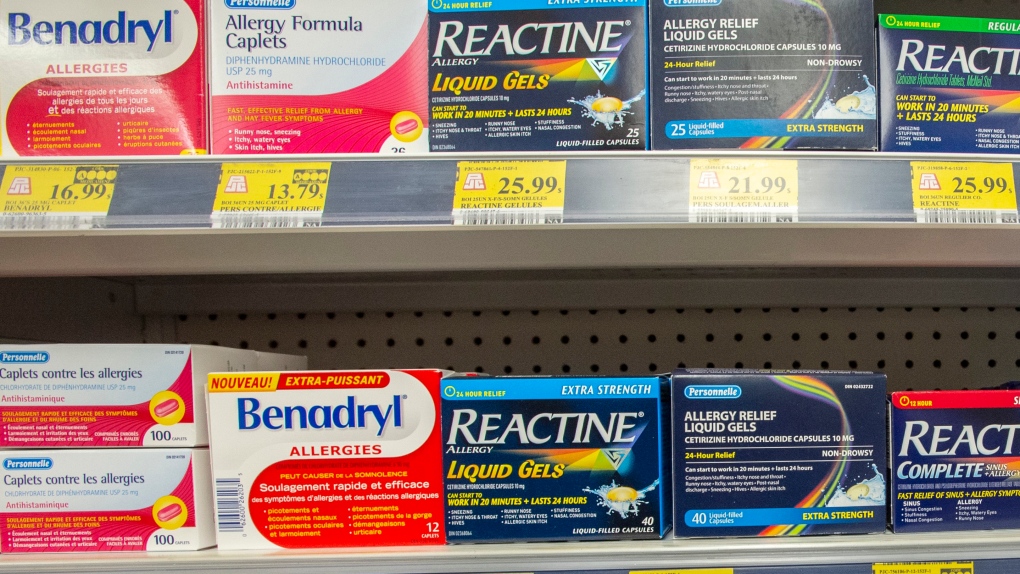 Antihistamines are seen at a pharmacy in Montreal, Monday, Nov. 11, 2019. THE CANADIAN PRESS/Ryan Remiorz

Sally McQuinn once kept her medicine cabinet stocked with Benadryl, the go-to medication to treat her daughter's multiple allergies: the Ottawa mother of three assumed that because it was sold on pharmacy shelves and didn't require a prescription, it was safe.

But she was surprised by recent headlines highlighting that a growing number of doctors are warning against the use of older antihistamines, such as diphenhydramine, the active ingredient in Benadryl, because of safety and efficacy concerns.

McQuinn says she will no longer buy Benadryl and instead choose from the number of existing alternatives.

"Nobody wants to choose the one that's going to have more negative consequences," she explains.

The Canadian Society of Allergy and Clinical Immunology (CSACI) released a statement in October recommending curbing the use of older first-generation antihistamines in both adults and children. They said newer antihistamines, including Reactine, Aerius, and Claritin, are safer.

Children are particularly at risk of severe consequences, such as seizures and coma, from too high a dose, and research suggests teens using Benadryl for allergies have lower scores on exams than their peers.

The CSACI statement called on regulators to consider moving Benadryl and other first-generation antihistamines from pharmacy shelves to behind the counter in order to force an interaction with pharmacists who can explain the issues and suggest alternatives.

Pharmacists, however, say the solution isn't so simple: putting Benadryl behind the counter, they say, is not practical and won't resolve the safety concerns. And they have the same concerns about many other over-the-counter drugs.

Consumers would have to speak to a pharmacist, who could decline to provide the medication. But since the drug is approved by Health Canada and is well known, many consumers, will continue to push for it, says pharmacist Barry Power, a spokesman for the Canadian Pharmacists Association.

That can create conflict at the drugstore, he adds.

"For many people, the side effect profile isn't a big concern. But if Benadryl were to come on the market today, it might require a prescription, because of the safety profile," he says.

Benadryl's maker, Johnson & Johnson says the products are approved by Health Canada and "when used as directed, are safe and effective."

In a statement, Health Canada said products containing diphenhydramine meet the requirements and regulations of the Food and Drugs Act. It says it is assessing the allergists' recent statement "to determine if further risk mitigation measures for diphenhydramine-containing products are required."

The agency says that it continues to monitor scientific and medical information as it evolves and would take action if this information required a change to "the regulatory status of products containing diphenhydramine."

Currently, Benadryl is approved for sale without a prescription in locations where a pharmacist is present. This means that it can be sold in pharmacies and certain grocery stores, but not in convenience stores or gas stations.

Nardine Nakhla, a pharmacist who teaches at the University of Waterloo in Ontario, says moving all the diphenhydramine-containing drugs behind the counter is "unrealistic ΓÇª due to the sheer number of products that contain these problematic ingredients."

Nakhla says there are also many other drugs, besides diphenhydramine, that have similar risk profiles and are available on pharmacy shelves.

Power agrees that the issue of which drugs belong behind the counter "becomes a bigger question as you start looking (at it)."

Health Canada determines whether a drug should be prescription or non-prescription and outlines the reasons for its use, acceptable dosing, and labelling requirements. But the National Association of Pharmacy Regulatory Authorities (NAPRA) and provincial regulatory bodies decide where non-prescription medicines can be sold.

In a statement, NAPRA said there is a process to request a change in how it can be sold, but "to date, NAPRA has not received a request regarding diphenhydramine." And, without a request, there is typically no review. Such a request would typically come from the industry, but Health Canada, an advocacy group, or any consumer can make one.

Power says it is "very rare" for more restrictions to be placed on an existing over-the-counter medication. "It is much more common to have restrictions loosened."

And in many countries outside of North America, Benadryl does not even contain diphenhydramine. The drug's U.K. maker, Johnson & Johnson, confirmed that the product there, for instance, contains cetirizine, one of the newer and safer antihistamines.

Health Canada's own guidance document on product labelling recommends that diphenhydramine-containing products marketed for sleep should carry a warning of "do not give to children less than 12 years of age," but there is no such recommendation for the same medication when marketed for cough or allergies. It says that although diphenhydramine can cause sleep, it can also cause excitability, and that it can mask other symptoms.

Despite their dispute over where in the pharmacy those Benadryl-like drugs belong, one thing that the allergists and pharmacists agree on is the need for education.

Whether or not diphenhydramine-containing drugs remain over-the-counter or become behind-the-counter access only, Power says the goal to improve safety could be achieved through a "concerted education campaign." He says consumers and health professionals need to understand the benefits, risks, and alternatives to these medications.