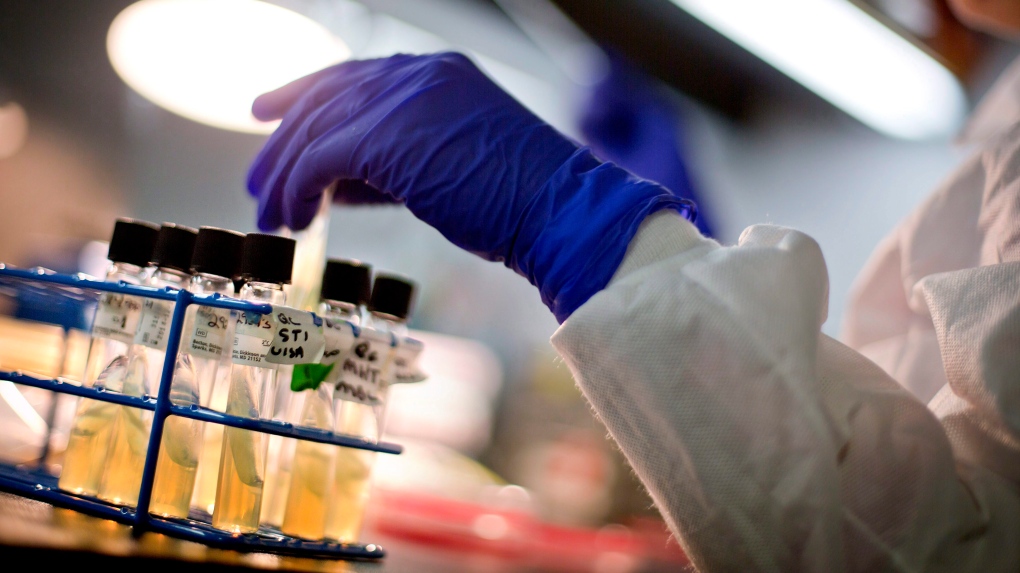 In this Monday, Nov. 25, 2013 file photo, a microbiologist works with tubes of bacteria samples in an antimicrobial resistance and characterization lab within the Infectious Disease Laboratory at the Centers for Disease Control and Prevention in Atlanta. (AP Photo/David Goldman)

TORONTO -- More beef products have been added to an ongoing recall across Canada due to E. coli concerns.

Retailers across Canada have been affected by the recall. Cracked pepper beef sirloin from Walmart stores in Ontario and Alberta, bacon-wrapped beef medallions from Overwaitea in B.C., and marinated “Miami ribs” from Pusateri’s Fine Foods in Toronto, Ont., were among dozens of consumer products previously recalled by the CFIA.

Many of the items named in the recall, first issued Oct. 12, were sold in Ontario and Quebec. Recalls have also been issued in British Columbia and Atlantic Canada.

Items also include products sold for commercial and institutional use, including hotels, restaurants, cafeterias, hospitals, and nursing homes across Ontario.

Other companies named in the notice include Nortown Foods in Thornhill, Ont., The Garden Basket in Markham, and Jian Hing Food Mart in Scarborough.

“If you think you became sick from consuming a recalled product, call your doctor,” the notice reads.

“Food contaminated with E. coli O157:H7 may not look or smell spoiled but can still make you sick. Symptoms can include nausea, vomiting, mild to severe abdominal cramps and watery to bloody diarrhea.”

The CFIA says there have been no reported illnesses associated with the consumption of the recalled products.

The updates add to a slew of recent recalls this month. In the past week, hundreds of beef and veal products and batches of diced chicken products were added to food recalls due to E. coli and listeria concerns.

On Wednesday, the U.S. Department of Agriculture issued a public health alert for some raw beef products imported from Canada that are linked to the growing recall.

According to the alert, the recalled products were distributed to institutions and retailers in Connecticut, Illinois, Maine, Massachusetts, New Hampshire, New Jersey, New York, Pennsylvania, Rhode Island and Vermont.

A complete list of recalled products and where they are sold can be searched on the CFIA website.

With files from CTV's Jonathan Forani