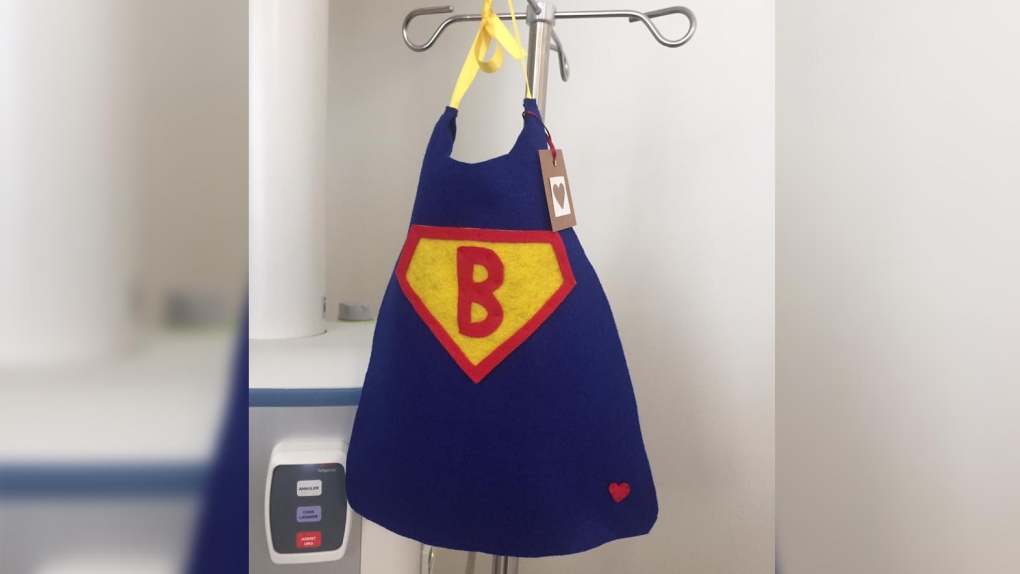 Michelle Campbell found this tiny superhero cape hanging up beside her newborn son Benjamin's incubator in the NICU.

After spending nearly a week at the Jewish General Hospital in Montreal, Michelle Campbell and her husband, Chris Korres, visited the neonatal intensive care unit (NICU) to check in on their newborn son Benjamin. He was born two months premature on March 10 and needed supervised medical attention while he grew stronger.

As the couple approached the incubator housing their son, a tiny blue object caught Campbell’s eye. It was a small felt cape adorned with a yellow Superman-style crest and the initial “B” printed on it in blue.

The adorable homemade cape was hanging from an IV pole beside Benjamin’s bed along with a message, which read: “To our little Superhero, love Stephanie T.”

Campbell told CTVNews.ca during a phone interview from her home in Montreal that she and her husband had no idea who Stephanie T. was or why she had made the touching gift for their son.

After asking around the department, the couple learned that Stephanie Treherne was one of the hospital’s nurses working in the NICU.

“We were very surprised that one of the nurses that we haven’t even worked with or seen or anything yet had left that,” she recalled.

Campbell said she was overwhelmed by the unexpected generosity of a stranger.

“Given the hormones and everything, I was very emotional and I just started bawling my eyes out when I saw that cape,” she said.

Eventually, Campbell and her husband were able to catch up with Treherne five days before they were to be discharged from the hospital.

“She was very sweet,” Campbell said. “When we asked her what brought it on she just said she wanted to do something nice for the babies.”

Treherne has been working in the NICU for about a year now and started making the felt capes in October. She told CTVNews.ca in a phone interview from Montreal on Friday that she came up with the idea while she was attending a conference for neonatal nurses.

Treherne said there was a slide in one of the presentations with an image of a baby in a superhero cape and she thought it was perfect.

“It represents exactly how we see the babies,” she said. “These babies are super strong. They fight through so much. They’re just little superheroes.”

Treherne estimates that she’s hand-stitched about 100 tiny capes for newborns at the JGH so far.

Treherne said she usually prefers to surprise parents with the capes in the NICU instead of giving it to them directly. She said she tries to create superhero capes for as many babies in the unit as possible, but usually she only gets to the ones that have been staying in the hospital for a week or more.

“I like to think that I get 70 per cent of our babies,” she estimated.

As for little Benjamin’s superhero cape, Campbell said it’s currently hanging up in his nursery at home. She said her son is thriving these days and they’re planning a newborn photo shoot soon, which will feature the little cape as well.

“It brings a smile to the parents’ faces in a time that’s not so good so it was really special for us to have gotten that,” she said.