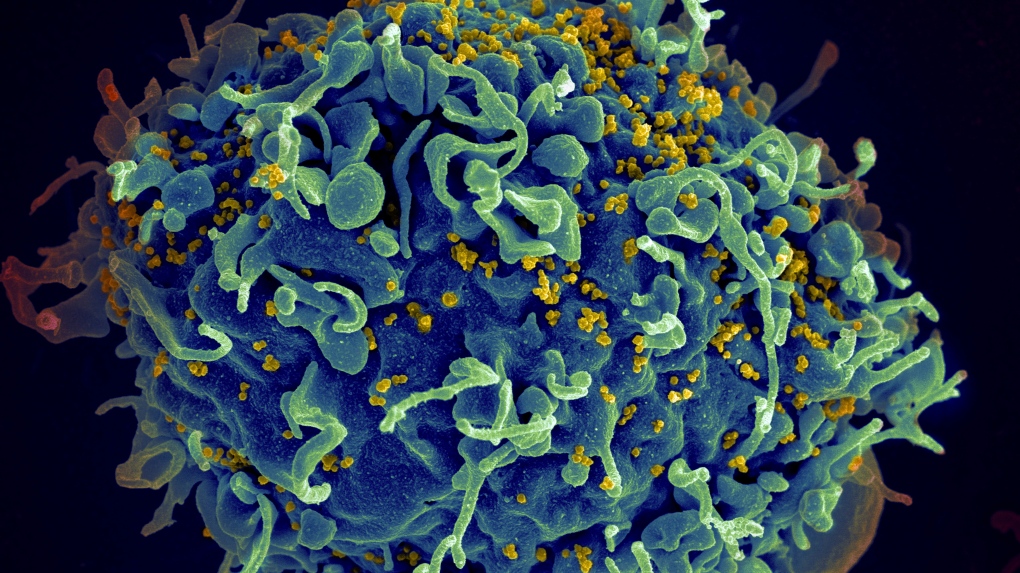 This electron microscope image made available by the U.S. National Institutes of Health shows a human T cell, in blue, under attack by HIV, in yellow, the virus that causes AIDS. (Seth Pincus, Elizabeth Fischer, Austin Athman/National Institute of Allergy and Infectious Diseases/NIH via AP)

If approved by regulators in the United States and Europe, the shots would be a new option for people with HIV and could help some stay on treatment. Instead of having to remember to take pills, patients instead could get injections from a doctor or nurse each month.

"Some people will be thrilled" at the convenience, said Mitchell Warren, executive director of AVAC, an AIDS advocacy group.

Condoms remain the most widely available and inexpensive form of HIV prevention. Pills taken daily can keep HIV levels so low the virus is not transmittable to sex partners, but not everyone takes them as prescribed.

The shots could improve how well some people stick to treatment, perhaps helping those who have trouble remembering to take daily medicine to keep infection at bay.

There are other potential benefits. Getting shots at a clinic can lend more privacy to patients worried about the stigma of filling an HIV prescription at a pharmacy, said Dr. Susan Swindells of the University of Nebraska Medical Center in Omaha, who presented results Thursday at an HIV conference in Seattle.

Cost will be an issue "to make sure that everyone has access to this medication," said Dr. Hyman Scott of the San Francisco Department of Public Health, who was not part of the study. It's not clear how much the shots would cost. HIV pills can cost a patient up to thousands of dollars monthly , depending on the drug combination, insurance coverage, rebates and discounts.

And there will be concerns about patients missing a monthly shot, which could lead to drug-resistant strains of the virus. It will be "a good option for some people," Scott said.

Whether monthly shots will also work to protect users' sex partners hasn't been studied yet, but there is reason to think they will, said experts at the conference.

The shots are a long-acting combo of two HIV drugs -- rilpivirine, sold as Edurant by Johnson & Johnson's Janssen, and ViiV Healthcare's experimental drug known as cabotegravir.

ViiV Healthcare paid for the research. The drugmakers are seeking approval later this year in the United States and Europe.

One study included 616 people who were taking pills to treat their HIV infection. The other study enrolled 566 people who hadn't yet started treatment, so they first got pills to get the virus under control.

In each of the studies, half the participants switched to the shots while the rest stayed on pills. After nearly a year, 1 to 2 per cent of people in both groups had traces of virus in their blood, whether they got shots or pills. That shows the shots worked as well as the standard pill therapy. A few people withdrew from the studies because of pain after the injections.

The studies were done in Europe and North America and in nations including Argentina, Australia, Russia, South Africa, South Korea, Sweden, Japan and Mexico.

"We don't have experience rolling out an injection in the real world," said Warren, the AIDS advocate. He said the next challenges will be how to deliver the shots and whether patients will remember to come back monthly. "These are big questions."