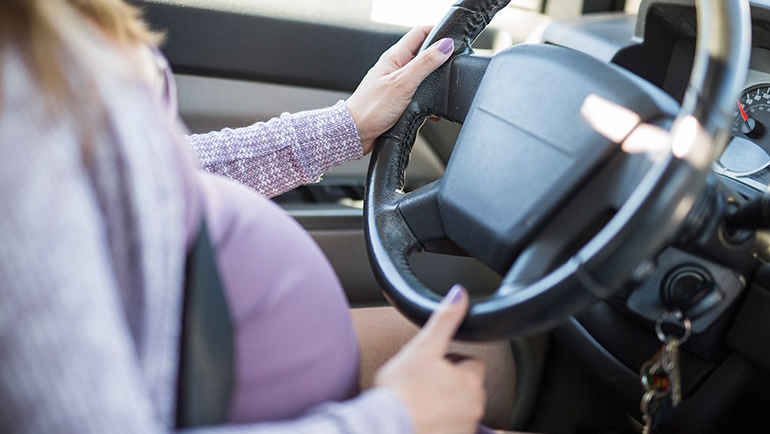 TORONTO -- Women with baby bumps should be cautious when they encounter another type of bump – speed bumps – while they're driving, according to new research.

Hadi Mohammadi, a University of British Columbia Okanagan researcher and associate professor of mechanical engineering, has published a new study suggesting that accelerating over speed bumps can pose a danger for pregnant women and their fetuses.

“There is lots of research about the importance of movement for women during pregnancy,” Mohammadi explained in a press release on Tuesday.

“Our latest research looked specifically at the impacts of sudden acceleration on a pregnant woman.”

For the study, which was published in the latest edition of the Journal of Biomechanics, Mohammadi and his team used new modelling based on data from crash tests and the “fundamental dynamic behaviours” of a pregnant uterus.

More specifically, the researchers looked at a model of a third-trimester fetus positioned with its head down, facing the mother’s back.

They took into account many factors, including the speed of the vehicle as it goes over the speed bump, the size of the speed bump, and how the movement puts pressure on the amniotic fluid that is protecting the fetus.

“We took all these factors into account to ensure a comprehensive differential model that mirrors real-world responses and interactions of the woman and fetus,” Mohammadi said.

Based on their data, the researchers found that speed bumps, if driven over quickly, can lead to minor injuries to the fetal brain, cause an abnormal fetal heart rate, abdominal pain, uterine contraction, increasing uterine activity, and other complications.

When a vehicle goes over a speed bump quickly, Mohammadi said the occupants are subjected to a relatively large force suddenly and over a short period of time.

As a result, the academic team had very simple advice for anyone driving over a speed bump, but especially pregnant women – slow down.

More precisely, slow down to less than 45 km/h when hitting a speed bump and preferably as low as 25 km/h to reduce the risk to the fetus.

“Obviously, there are other variables at play when a driver approaches a speed bump, but we hope our findings provide some evidence-based guidance to keep drivers and their occupants literally and figuratively safe,” Mohammadi said.

The engineer said he hopes his research will contribute to vehicular safety improvements for pregnant women.