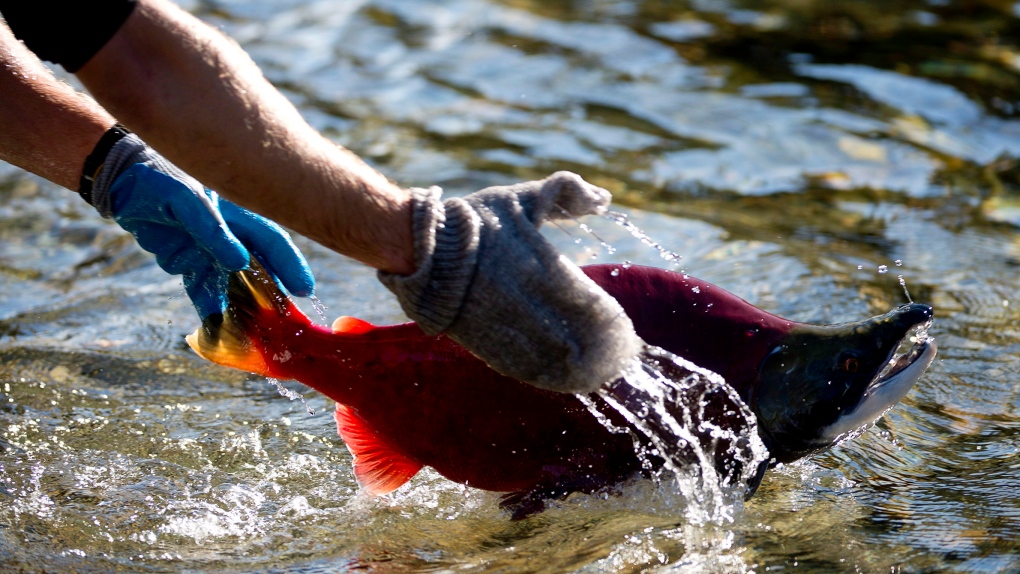 A worker throws a sockeye salmon back into the river after counting it as the salmon make their way up the Adams River in Roderick Haig-Brown Provincial Park near Chase, B.C. Tuesday, Oct. 14, 2014. (THE CANADIAN PRESS / Jonathan Hayward)

TORONTO -- Indigenous and remote communities that rely on fish for sustenance shouldn’t worry about mercury levels in their food as the benefits of eating the meal outweigh the risks, according to a new study.

The study, published recently in the journal Environmental Research, examined 443 blood samples and 276 hair samples from residents across nine communities in the Mackenzie Valley of the Northwest Territories and found that mercury exposure “may be low even when it is sometimes present in elevated levels,” according to a news release.

The study was part of a broader “biomonitoring project” to address concerns within these communities about potentially harmful containments within their traditional food sources, such as fish.

“Previously, elevated levels of mercury were found in some fish species in some lakes and therefore, communities wanted to know if these sometimes-elevated levels in fish also meant they were elevated in people,” Sara Packull-McCormick, a PhD candidate at the University of Waterloo’s School of Public Health Sciences, said in a news release.

“The good news is that generally, the exposure in communities we studied was low. It means the benefits of consuming these foods tend to outweigh the risks, which is important for these communities since fish consumption has nutritional, cultural and economic benefits.”

According to Health Canada, mercury exposure is associated with “impaired functions of the central and peripheral nervous systems” and can lead to a decreased IQ and delays in walking and talking among young children. Adults, meanwhile, can experience personality changes, changes in vision and memory loss.

In 2017, the Canadian Health Measures Survey (CHMS) reported that mercury levels among Canadians were “well below” Canadian guidance, but the survey did not include participants from any of the Canadian territories or Indigenous people living on reserves.

Brian Laird, a professor in the School of Public Health Sciences and principal investigator of the study, said this latest research should help those communities not included in the CHMS.

“This study is important because it provides these communities with the information they need to help guide their decision-making,” he said.

“Mercury can pose serious risks to people’s health, but these communities now have a baseline to see what changes occur in the future, especially taking into account those that may be caused by climate change.”