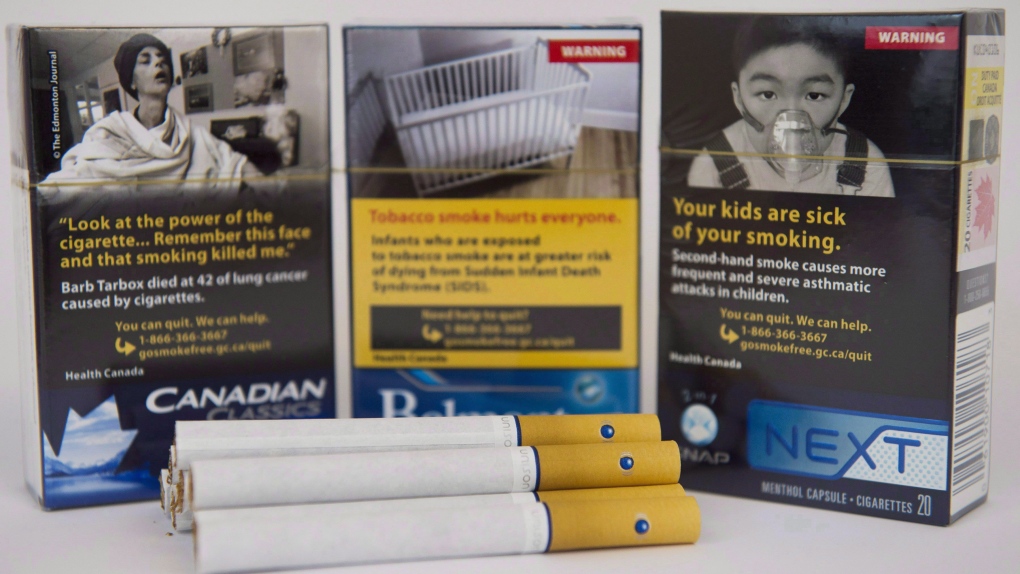 Cigarettes with a squeezable menthol capsule inside the filter are displayed in Toronto on November 18, 2015. THE CANADIAN PRESS/Nathan Denette

TORONTO -- A new study says that menthol cigarettes recruited an extra 10 million smokers in the U.S. between 1980 and 2018.

The findings, published online in the journal Tobacco Control on Thursday, mark a first for a study of this kind.

Researchers calculated that menthol cigarettes were also responsible for 378,000 premature deaths and a cumulative total of three million years of life lost during the 38-year study period.

Menthol cigarettes were first created in 1926, but only became widely popular in the late 50’s and early 60’s.

Because menthol products produce a “cooling sensation in the throat and airways,” which lessens irritation and the harshness of cigarette smoke, it is thought that menthol cigarettes encouraged young people to take up smoking and made it harder for smokers to quit, according to the study.

A 2009 legislation called the “Family Smoking Prevention and Tobacco Control Act” gave regulatory body U.S. Food and Drug Administration (FDA) the power to ban menthol in cigarettes, but it was never implemented.

In order to estimate the number of excess smokers and deaths attributed to menthol cigarettes, researchers used a simulation model of smoking prevalence and health effects to reproduce smoking rates and the associated deaths from 1980 to 2018, drawing on data from the National Health Interview Survey, which is affiliated with the U.S. Centers for Disease Control.

They then extrapolated those estimates using the same model, but recasting the data as if menthol cigarettes had not been on the market during that time period. They then compared the two data sets.

Menthol cigarettes were also responsible for slowing down the decline of smoking rates.

Researchers’ calculations show that in the absence of menthol cigarettes, the “overall U.S. smoking prevalence would have declined from 33.2 per cent to 11.1 per cent, compared with the observed 13.7 per cent in 2018.”

And while the study only addressed the U.S. general public, researchers say the findings may help the FDA regulate menthol products in the future – and other countries may follow suit.

The study says that the “analysis puts in perspective the magnitude of harm that menthol cigarettes have already caused in the USA and provides the FDA with additional information about the potential danger of those products.”