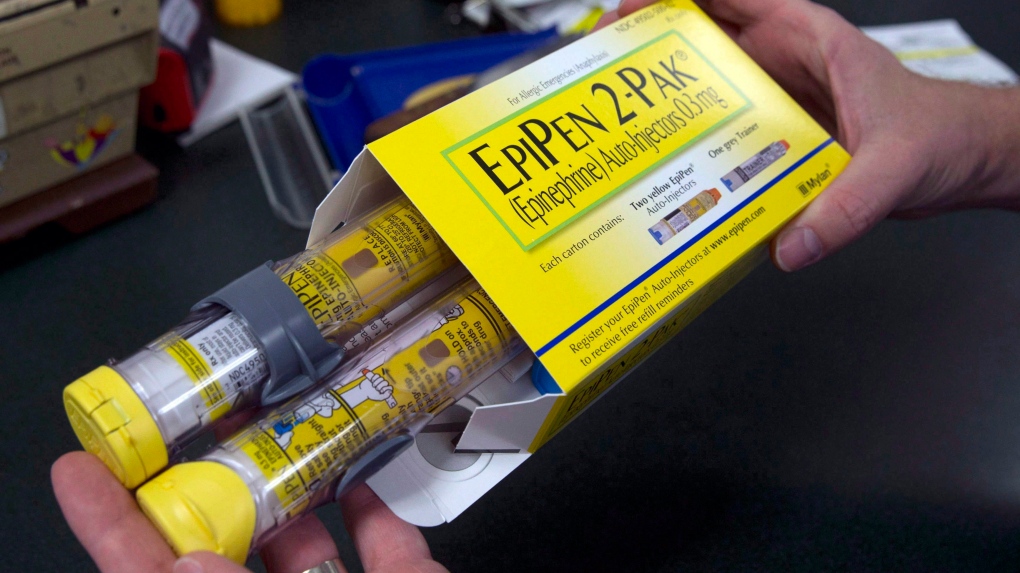 A pharmacist holds a package of EpiPen epinephrine auto-injectors, a Mylan product, in Sacramento, Calif., July 8, 2016. (THE CANADIAN PRESS/AP-Rich Pedroncelli)

U.S. regulators on Tuesday warned the public about malfunctions involving some EpiPens, the emergency injectors for severe allergic reactions.

The Food and Drug Administration issued the warning after drugmakers Pfizer and Mylan told medical providers that the problems could cause death or serious injuries.

Pfizer manufactures the injectors for Mylan, which sells them. When held against the thigh, they're supposed to automatically inject the hormone epinephrine to stop runaway allergic reactions to insect stings and foods such as nuts and eggs.

The malfunctions can prevent or delay the devices from injecting the drug or cause them to eject it prematurely. Some users also may have trouble getting the EpiPen out of its carrier tube quickly because of a defect. The problems were found in both EpiPen and EpiPen Jr versions of the product and in their authorized generic versions.

The companies told users to carry two of the devices with them at all times. People with severe allergies often keep one auto injector with them and others at home, school or work.

The companies also are urging people who use the products to review the instructions and to contact Mylan Customer Relations at 800-796-9526 for help or free replacements.

Mylan has taken heat from parents, doctors and Congress for repeatedly raising EpiPen's list price from about $60 for a pair in 2007 to $600 per pair in 2016. People with prescription drug coverage as part of their health insurance often pay less. Mylan refused to cut the price, though it eventually offered its own generic version for half price.

Pfizer has struggled for a couple years to resolve manufacturing quality problems at its factory that makes EpiPens, resulting in on-and-off shortages since at least 2018. Pfizer said the devices are more consistently available now.

The FDA said it's aware of reports of patients being harmed, but couldn't immediately provide details.

Pfizer wrote in an email that the problems with the products' safety release involved "a very limited number" of EpiPens, and only 0.0002% had the defective carrier tube. It didn't give specifics about the patients harmed.