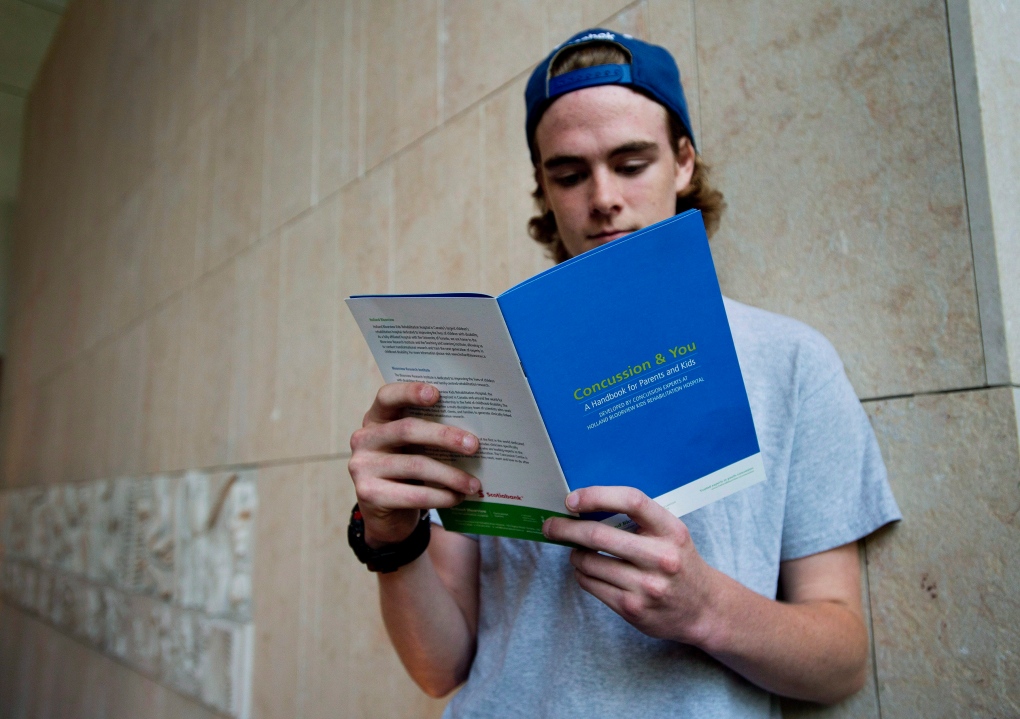 Warren McNeil, 17, poses for a photograph at the Holland Bloorview Kids Rehabilitation Hospital in Toronto on August 19, 2015. (Nathan Denette / The Canadian Press)

TORONTO -- Getting physical exercise within a week of suffering a concussion may reduce a young person's risk of experiencing ongoing symptoms, say researchers, whose finding runs counter to conventional guidelines calling for strict mental and physical rest following the common brain injury.

"Exercise is probably a good medicine," said Dr. Roger Zemek of the Children's Hospital of Eastern Ontario, who led the study of Canadian children and teens conducted at nine pediatric hospitals.

Those who said they resumed light to moderate activity soon after a concussion -- such as walking, swimming and stationary cycling -- were found to be less likely to have such symptoms as nausea, headaches and dizziness a month later.

Exercise increases blood flow to the brain and could help speed up healing and improve cognitive function, which is often altered as the result of a concussion, researchers said.

"We also know that by getting outside and doing this, patients are taken away from that negative cycle of 'I'm sick' and being stuck in that sick role," Zemek said from Ottawa. "And perhaps they're seeing something they can do to help them improve."

However, that doesn't mean kids should resume activities that could lead to another concussion.

"So I'm not suggesting that a patient who's had a concussion go back and play their football tournament or hockey tournament the next weekend.

"But a couple days after their injury, if they feel like they want to get outside and go for a walk, or they did the walk yesterday and want to ... go a bit farther or a bit faster, as long as they're not going to fall or get into a collision, I think it's actually going to be good for them."

To conduct the study, published Tuesday in the Journal of the American Medical Association, researchers surveyed almost 2,400 kids ranging in age from five up to 18 who were treated for concussion in hospital emergency departments. About 70 per cent of the brain injuries occurred while playing sports or doing other recreational activities.

Among children and teens who reported having three or more symptoms that first week, those who engaged in early physical activity were 25 per cent less likely to have ongoing or worsening problems at one month -- "regardless of the intensity" -- compared to those who chose rest over exercise, Zemek said.

He believes the findings suggest guidelines mandating strict rest until concussion symptoms disappear need to be reconsidered -- with one caveat.

"I do feel we need to be prudent and really make sure this is not taken as a free pass to go back to competition ... (not) until they're medically cleared."

An accompanying editorial says the concussion guidelines were developed due to concerns about the risk of "second-impact syndrome" if athletes resumed play while still symptomatic, along with worries that athletes might be tempted to play injured if allowed to return to play too soon.

"However, the necessity of waiting until an athlete is completely asymptomatic has resulted in some athletes resting for weeks or months, at which point rest may be less helpful and perhaps even harmful," write Dr. Sara Chrisman of the Seattle Children's Research Institute and Dr. Frederick Rivara of the University of Washington.

More research is needed to determine the potential benefits and harms related to early physical activity post-concussion, they say.

"Until then, clinicians and parents should use common sense about allowing limited physical activity as tolerated and be cautious about resting a previously active athlete for prolonged periods."

The study is published in the Journal of the American Medical Association.