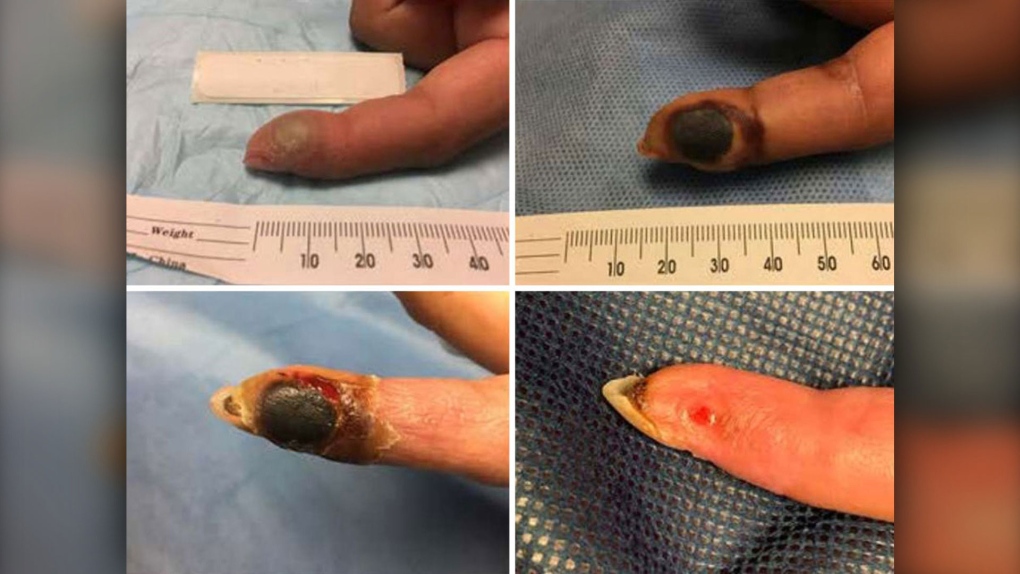 A lab worker was infected with smallpox-related virus after accidentally poking the tip of her finger with a needle. (Morbidity and Mortality Weekly Report / CDC)

TORONTO -- A San Diego lab worker who refused to get a vaccination was infected with smallpox-related virus after accidentally poking the tip of her finger with a needle while she was conducting an experiment on mice.

The 26-year-old woman pricked herself with a needle containing vaccinia virus, a genetically modified strain of smallpox-related virus, when she was trying to inject it into the tail of a mouse.

A report published in the Morbidity and Mortality Weekly Report by the Centers for Disease Control and Prevention (CDC) on Friday states that she sought medical care at the emergency department after informing her supervisor.

An image in the report shows that by day 10 her finger was swollen. Her symptoms escalated on day 12, where she was treated for fever, swollen lymph nodes, pain, and a worsening of the infection in her finger at the emergency department.

The lab worker was given vaccinia antibodies and tecovirimat, a virus inhibitor, to reduce her fever and inflammation.

The tip of her finger, however, began to turn black and rot. It took three months for the infection on her finger to clear up.

The woman declined the smallpox vaccination she was offered when she first started the role. She was worried about side effects, according to the report.

“Although the patient had declined vaccination when it was initially offered, during this investigation she reported that she did not appreciate the extent of infection that could occur with VACV when vaccination was first offered,” the authors wrote.

She took four months off work to ensure she didn’t spread the infection.