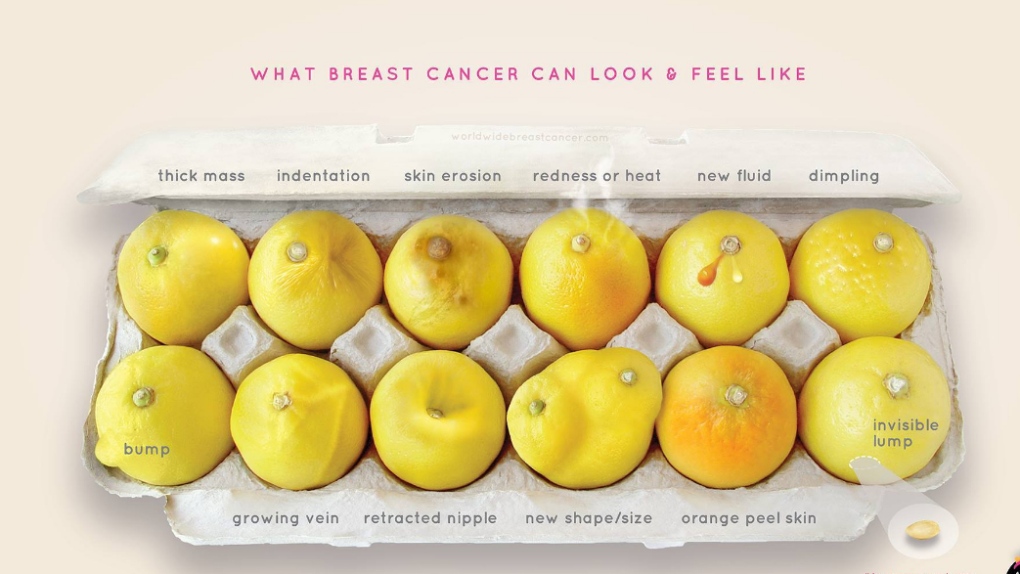 An image from the 'Know Your Lemons' campaign is seen here. (Facebook)

A breast cancer survivor is urging women to share a post that vividly depicts what breast cancer can look and feel like in hopes of spreading information about early indicators of the disease.

The image of a dozen lemons shows 12 different ways that breast cancer can affect women, from tiny bumps to dimples to the growth of a vein.

Facebook user Erin Smith Chieze said she was compelled to write the post after seeing a popular “game” making the rounds on social media in which users post an image of a heart, and then later state that it’s a message about breast cancer awareness.

Chieze wrote that spreading a medical message was more important than “playing games.” In fact, she credits a similar picture with alerting her to get an unusual indentation checked by her doctor.

Five days after seeing the image, she was diagnosed.

“Without having seen a picture randomly with real information, I wouldn't have known what to look for. Do us a favour, stop playing games with my life and start truly helping people,” she said.

The image has since been shared more than 25,000 times on Facebook.

The photo is part of the cheekily titled “Know Your Lemons” campaign, which provides women with helpful information about spotting signs of breast cancer.