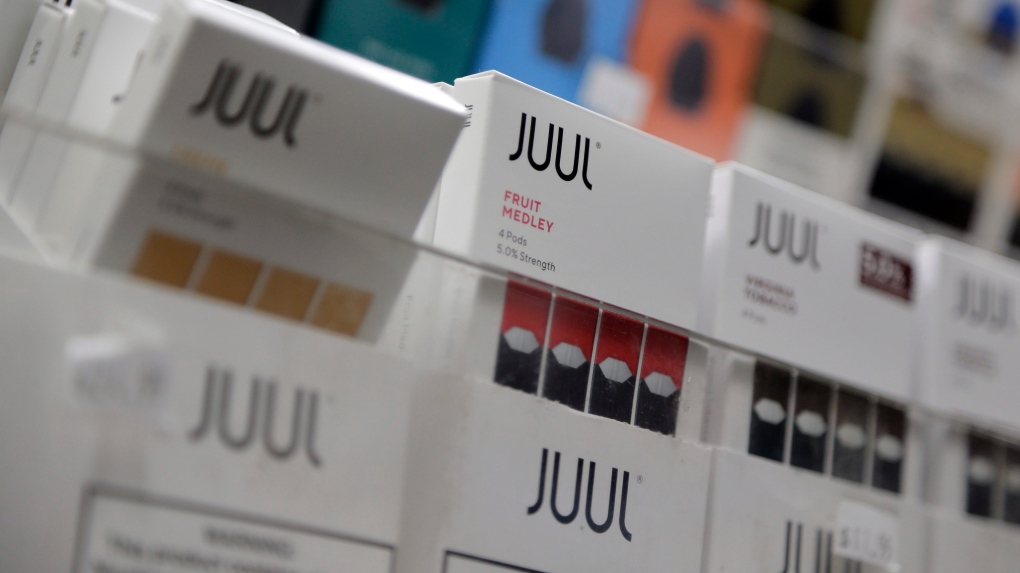 In this Dec. 20, 2018, file photo Juul products are displayed at a smoke shop in New York. (AP Photo/Seth Wenig)

TORONTO -- Juul Labs will temporarily stop selling most of its fruit-flavoured vaping pods in Canada, a company spokesperson confirmed to CTVNews.ca.

The company’s general manager Michael Nederhoff announced that Juul will halt production of its mango-, vanilla-, fruit- and cucumber-flavoured pods in a letter to retailers this week. This news was first reported by The Logic on Tuesday.

Juul will continue to produce the mint and tobacco-flavoured e-cigarette pods. The company will not re-supply stock once retailers are out of the flavoured pods.

In the letter, Nederhoff said Juul wants to regain the public’s trust. They may reintroduce the fruit-flavoured pods under the “guidance and regulation” of Health Canada.

Juul’s announcement comes at a time where health professionals have been calling for urgent government crackdown on the marketing of e-cigarette products to teenagers.

In December, Health Minister Patty Hajdu proposed new regulations that would ban advertising of vaping products to teens in public and on social media.

Hajdu also proposed that there be mandatory health warnings on all vaping product packaging.