'It's so gross': Woman's eyes severely swollen after eyelash-gluing session 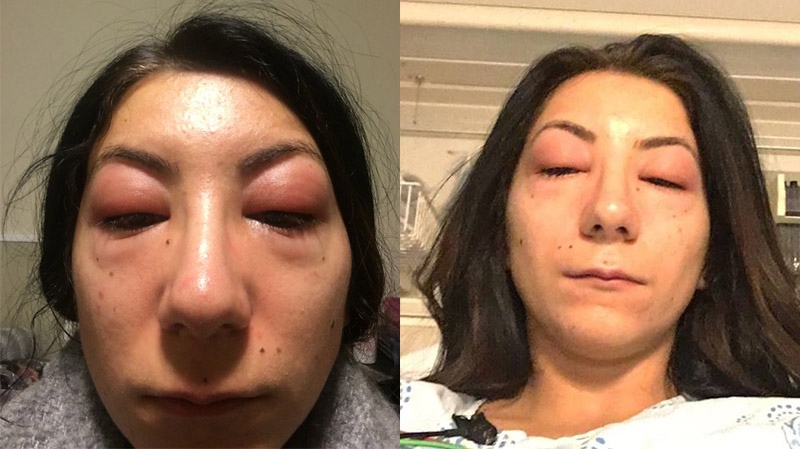 An Ottawa-area woman who developed a severe allergic reaction after getting eyelash extensions is warning other women about the potential danger of the hugely popular beauty treatment.

Isabelle Edith Kun, a 20-year-old nursing student living in Ottawa, says she went on Tuesday to get a new set of eyelash extensions applied. On Thursday, she woke up to find her eyes had swollen almost completely closed.

“My girlfriend had slept over and I couldn’t even see her. And, I was having a hard time swallowing and even breathing,” she told CTVNews.ca by phone.

The friend called her an Uber to take her to hospital.

“They took me right in within seconds when they saw my face. My eyes are swollen both above and under and my tonsils were apparently really inflamed,” she says.

Kun has never had an allergic reaction to anything in her life, she says. But for the last year or so, she had been getting eyelash extensions done every two or three weeks, paying $100 or more each time to have an esthetician apply the lashes, one at a time, using an adhesive.

When she had the treatment last month, she noticed her eyes became swollen, so she asked for the name brand of the eyelash adhesive used. This time, she says she asked the esthetician if they were still using the same brand, explaining she believed she had an allergy to the glue.

Kun says the esthetician replied, “I don’t know the name of the glue we use, but you should be good,” and told her not to worry.

“So I said okay. I continued with it when I really shouldn’t have. I shouldn’t have done it when I heard she didn’t even know what glue she was using or what the ingredients were or anything,” Kun says.

Within hours, Kun’s eyes were swelling up even more severely than before.

By Thursday, she was in hospital, being administered an antihistamine and steroid intravenously, to try to reduce the swelling.

Kun says the swelling hasn’t improved, but she was sent home and advised to continue with the antihistamine in pill form to see if her condition gets better.

Kun is worried that might not happen because she hasn’t been able to get the adhesive removed because her eyes are still too swollen.

“My eyes are actually even worse now. There’s like a sac of fluid under my eye now. It’s so gross,” she says.

The majority of eyelash glues are made of instant adhesives called cyanoacrylates. Several dermatologists have documented patients who have developed mild to severe allergic reactions to cyanoacrylates, which are also used in “nail wrapping” and other manicure procedures.

Sara Du, the owner of the Sara Beauty spa that Kun visited, said her business is not able to offer allergy testing to every client, but will offer it to those who request it.

She declined to comment on Kun’s experience or any of her clients, but she said that with any reaction to a beauty service, it’s often difficult to be sure what caused the reaction.

Kun says she didn’t know that she could even develop a sudden allergy and she wants other women to know about the risk and to ensure they ask for an allergy test.

“Also be very careful where you go. These people are dealing with your eyes, with your vision. I mean, this morning I woke up and I wondered if I would ever be able to see again,” she says.

As for whether she will ever get extensions again, Kun says she hopes she can.

“I would want to do them again, but I will be going for allergy testing first, because I do love getting fake eyelashes.”