Is offering cash a sensible way to meet demands for plasma?

Should for-profit clinics be allowed to collect blood plasma from paid donors in Ontario? That's a question currently facing the government -- and it's already leading to heated debate.

There is currently one clinic in the country -- Cangene -- licensed to pay donors for plasma, the yellow liquid left over when red blood cells are removed from our blood.

But a newly formed company called Canadian Plasma Resources wants to open three plasma-collection clinics in Ontario. The plasma collected would be processed into products to treat a variety of diseases, including hemophilia.

The company says its clinics are fully equipped and ready to go. But Ontario's health minister has urged the federal government to hold off on approval in order to allow for more public debate. In Ottawa, federal Health Minister Leona Aglukkaq has said Health Canada will hold consultations before granting any approvals.

But is offering $20 per donation a sensible way to meet demands for plasma? Or does allowing private clinics to handle blood products risk endangering the health of the Canadians?

David Page, the national executive director of the Canadian Hemophilia Society, says his group welcomes a fresh supply of plasma, even if it's for cash.

"Right now, all of the plasma products come from the U.S., and 70 to 80 per cent of it is plasma from paid donors. That is the reality. Does it make any difference if it is Canadian or American?"

Mike McCarthy, who has hemophilia, hopes the proposed clinics never open at all. He was one of some 30,000 Canadians infected with hepatitis C during the tainted blood scandal of the 1980s, when plasma was regularly collected for money from U.S prisoners.

He's worried that two of the proposed Ontario for-profit clinics would sit near homeless shelters in downtown Toronto. The third is near a drug abuse treatment centre in Hamilton. Those sound like potentially dangerous locations to offer $20 per donation, McCarthy says.

"I just didn't think after all the pain and suffering, the billions of dollars that taxpayers had to pay our for compensation and to build a new blood system, that we should even be entertaining the idea of the paid-donor model in Canada," he says.

Canadian Plasma Resources says the clinics are situated near university campuses and it expects young students will be the main source of the donations. They also say their donors would be rigorously screened with new technology.

"Studies show plasma-derived products made from paid donors are as safe as those from unpaid donors," company officials wrote in a statement to CTV News.

A government committee has been asked to review the proposed clinics, and the company says it expects to hear if it can begin operations by the end of this year. 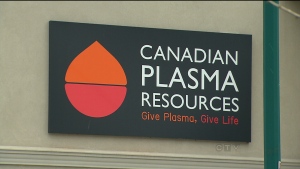