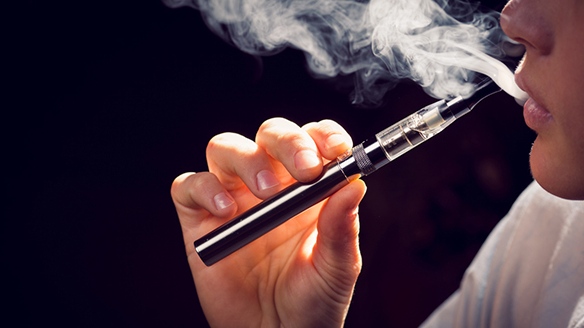 A man smoking an e-cigarette is seen in this file image. ( 6okean / Istock.com)

NEW DELHI -- India's government on Wednesday decided to ban e-cigarettes, expressing concern at the alarming rate at which vaping is becoming popular among the country's youth and causing breathing illnesses.

The ban was approved by the Cabinet. The government is expected to issue an ordinance soon prohibiting the manufacturing, import, export, transport, sale, distribution, storage and advertising related to e-cigarettes.

"Its use has increased exponentially and has acquired epidemic proportions in developed countries, especially among youth and children," a government statement said.

Finance Minister Nirmala Sitharaman said that e-cigarettes were promoted as a way to get people out of their smoking habits but reports have shown that many are becoming addicted to them.

Following Govt ban, storage of e-cigarettes & the like devices shall be punishable with an imprisonment of upto 6 months or fine upto Rs 50,000 or both
This will protect people from these gateway products & also cut tobacco consumption#SwasthBharat @PMOIndia pic.twitter.com/0YcGafuKMo