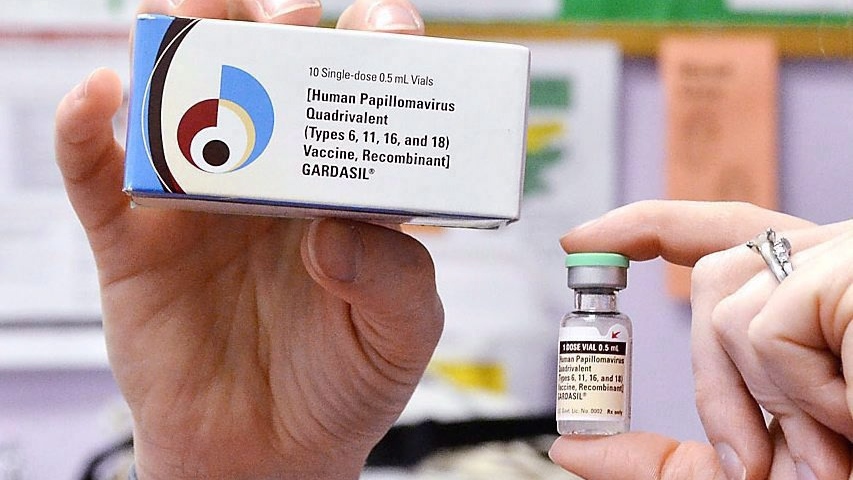 A child health nurse holds up a vial and box for the HPV vaccine, brand name Gardasil, at a clinic in Kinston, N.C., March 5, 2012. (Charles Buchanan / THE CANADIAN PRESS)

VANCOUVER -- Rates of cervical pre-cancer in women have been cut by more than half in British Columbia and the province's school immunization program for the human papillomavirus is being given credit for the results.

A study published in the Journal of Infectious Diseases says those who took part in the program to prevent the sexually transmitted infection had a 57 per cent reduction in incidence of pre-cancer cells compared to unvaccinated women.

The program has been in place in public schools for 12 years and the first groups of women who were vaccinated in Grade 6 entered into the cervix screening program, allowing researchers to compare outcomes with those who hadn't been vaccinated.

Dr. Gina Ogilvie, a senior research adviser at B.C. Women's Hospital, says the study adds to the growing body of evidence highlighting the positive impact of the vaccine.

HPV is common in both men and women.

It can be easily spread through sexual contact and while most HPV infections clear up on their own, some pre-cancerous lesions can develop into cancer if not treated.

The Canadian Partnership Against Cancer says HPV immunization is offered to children in all provinces and territories, generally between grades 4 and 7.

"The dramatic success -- pre-cancer rates dropping by over half, shows us the importance of having children immunized early to protect their lives," he said in a statement on Wednesday.

HPV has been identified as the cause of almost all cervical cancers.

"The decline we are seeing in HPV-related cancer rates highlights how strong partnerships between school districts and health authorities can significantly improve the well-being of B.C. students."

This report by The Canadian Press was first published Oct. 16, 2019.