How webcams are helping Canadian doctors save lives in Syria 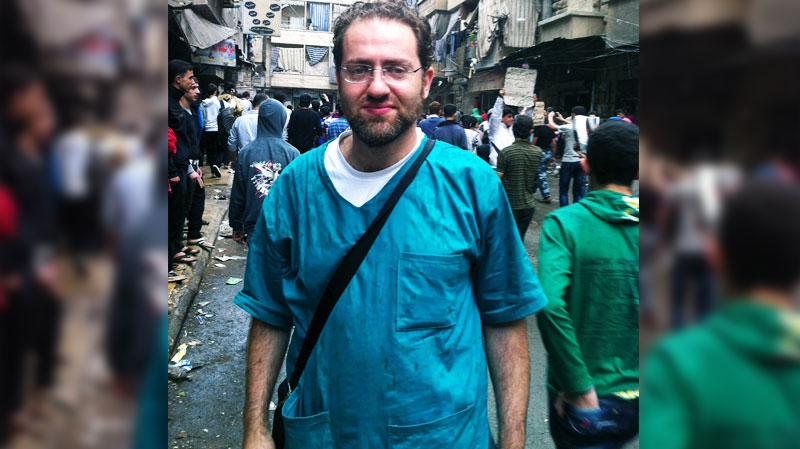 As the civil war in Syria drags into its fifth year, Canadian doctors are helping treat wounded civilians and fighters, caring for them remotely through the wonder of telemedicine.

Every day, physicians and surgeons working from the safety of their Canadian homes help overwhelmed Syrian health workers in secretly located hospitals. They assess patients by webcam, prescribe treatment, and guide them through procedures via video conferencing.

Dr. Anas Al Kassem, a Syrian-Canadian surgeon who practises in Simcoe, Ont., says just earlier this month, he was able to help a 20-year-old woman who had been badly injured in an airstrike near her home.

The woman had sustained multiple injuries in the blast, but most concerningly, she was having trouble breathing. Staff at the hospital took an X-ray of the woman’s chest and used their Internet connection to send the images to Dr. Al Kassem at his home. That’s where he noticed that the blast had caused air to build up around the woman’s left lung.

“That’s life-threatening; you have to evacuate the air,” he told them, explaining that the air pressure can cause the lung to collapse.

“So I said, ‘Drop everything. Let’s get a chest tube in immediately’,” Dr. Al Kassem recounted to CTVNews.ca.

A chest tube that’s inserted through an incision into the narrow space around the lung can help drain the air. The procedure is a fairly simple one for a surgeon. But on the day the woman was injured, there were no doctors in the understaffed hospital to perform it.

So instead, Dr. Al Kassem guided the hospital’s nurses as they inserted the chest tube themselves. From his home computer, he was able to watch via webcam as the staff completed the procedure, offering support along the way.

“They put the tube in, then did another scan later and the lung was opening nicely. The air was evacuated and she was breathing again normally So in that case, we got to see the results immediately,” he said.

Dr. Al Kassem, a father of five, has travelled to Syria several times since the civil war broke out to care for the wounded. But as the fighting intensified, he and his colleagues realized there were many areas of the country they could no longer access.

So two years ago, UOSSM-Canada, the Canadian arm of the Union of Syrian Medical Relief Organizations, helped set up telemedicine equipment in four medical facilities in the country’s north. They also equipped four other clinics in Ghouta, a town near Damascus that Syrian rebels currently control.

“We choose areas with a high population, a shortage of physicians and that are under siege. These are critical areas that need remote support from physicians abroad,” he says.

The medical staff Dr. Al Kassem speaks to on the ground say the situation has worsened in recent months, especially since Russian airstrikes began.

“They’re telling us it’s crazy now. There used to have one or two airstrikes a day; now it’s seven or eight. And they are targeting hospitals. So it’s certainly more risky now than it used to be,” he says.

Since the start of the conflict in March 2011, Physicians for Human Rights says it has documented more than 300 attacks on Syrian medical facilities that have resulted in the deaths of 670 medical personnel. They say that Syrian government forces have been responsible for more than 90 per cent of these attacks, each of which has been illegal since targeting medical personnel is a war crime under the Geneva Conventions.

The civil war has devastated Syria’s medical system. According to UNICEF, one out of every two doctors has already fled, and two out of every three hospitals have been so badly damaged in fighting, they are no longer functional.

Those hospitals that are still working face not only a shortage of staff, but critically low supplies and medicines. As well, the al Assad government has cut off electricity to all regions that regime forces no longer control. The facilities where UOSSM-Canada have set up equipment now rely on diesel generators for electricity and satellite internet.

Each day, a cadre of nine Canadian physicians with UOSSM-Canada takes turns being on call for 12-hour “remote shifts.” Nurses who aren’t sure how to proceed with a patient can text the doctors questions if it’s something that can wait, or phone them directly if it can’t.

“If they need us, and there’s no physician available, which is not uncommon, they can call us in emergencies and we can take a look and give instructions,” Dr. Al Kassem says.

Each doctor has his own specialty; Dr. Al Kassem’s is general surgery. But the group also works with SAMS, the Syrian American Medical Society, which has set up similar telemedicine equipment in other secretly-placed clinics.

“We co-operate with them because they sometimes have subspecialists we don’t have. But we’re the only two groups who are doing this, as far as I know,” says Dr. Al Kassem.

Each of Al Kassem’s “remote shifts” is performed for free, on his own time, from home. “I finish my work in hospital and the next day I’ll take a shift with this,” he says.

“...I try to balance the remote shift with my other work, and with time with my family. It’s not always easy,” he says with a laugh.

But for overworked fellow medical staff facing one of the greatest humanitarian crises of our time, Dr. Al Kassem believes it’s the best way he can help.