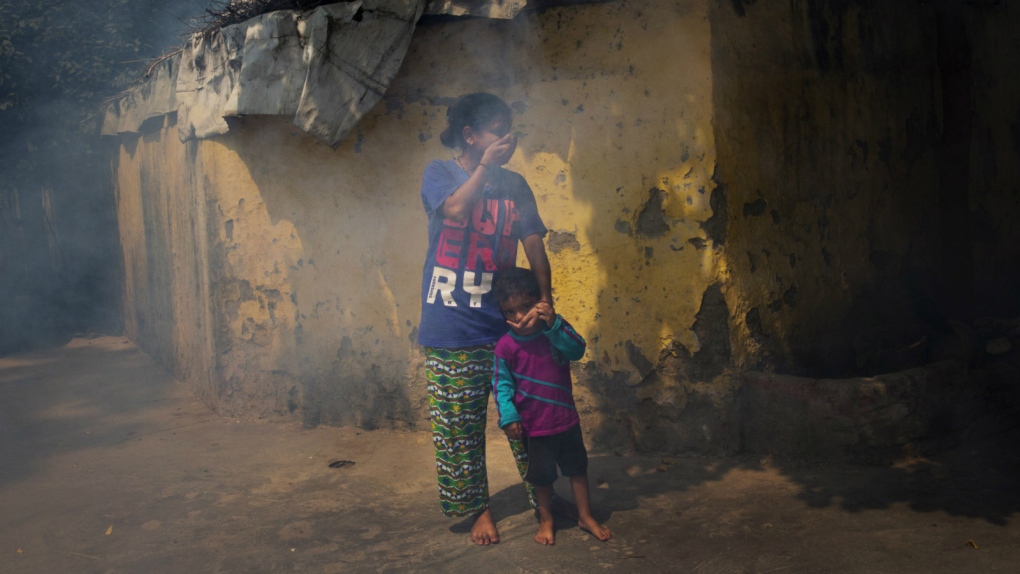 A woman covers her face and tries to protect a child from smoke as a municipal worker fumigates a residential area to prevent mosquitoes from breeding in New Delhi, India on Sept. 16, 2015. (AP / Bernat Armangue)

NEW DELHI - As India's capital struggles with its worst outbreak of dengue fever in five years, officials threatened Wednesday to cancel private hospitals' licenses if they turn away patients.

More than 11 people have died from the mosquito-borne disease in New Delhi this year and about 1,900 cases have been recorded at city hospitals.

The families of two boys have said they died after being denied treatment at a number of hospitals, and a married couple reportedly killed themselves when their only child died after being rejected at five hospitals.

“No patient arriving at a hospital with dengue should be turned away,” Health Minister Satyendra Jain told reporters.

He said he has ordered private hospitals in the capital to hire more doctors and increase the number of beds available for dengue patients. Hospitals have reported a shortage of beds and staff as they try to cope with the throngs of patients.

Dengue's symptoms include severe muscle and joint pain, high fever and rash. Its most acute forms can cause internal bleeding and death.

In many state-run hospitals, two patients were sharing each bed.

“There are 20,000 beds available. And we will increase the number of hospital beds by another 1,000 by this weekend,” Jain said.

The health minister tried to calm people's fears that the outbreak was spreading rapidly, with more than 600 cases reported last week alone.

“It is not an epidemic. But people are panicking,” Jain said.

Jain and New Delhi's top elected official, Chief Minister Arvind Kejriwal, have made “surprise” visits of government and private hospitals to check on their preparedness to deal with the outbreak.

State-run hospitals have cancelled vacations for doctors and ordered them back to work.

The city government has also ordered laboratories to cap the cost of dengue fever tests at 600 rupees ($10) to prevent them from charging exorbitant fees.

Jain also advised people with milder forms of dengue to consult doctors, but to stay at home instead of adding to the burden of overstretched hospitals.

Teams of workers have fanned out across the city to spray insecticides on stagnant water collecting in puddles after recent monsoon rains.

Dengue is often seen as an urban disease with mosquitoes breeding in stagnant water. Outbreaks are reported every year after the monsoon season that runs from June to September. However, this year's outbreak has been described as the worst in five years.