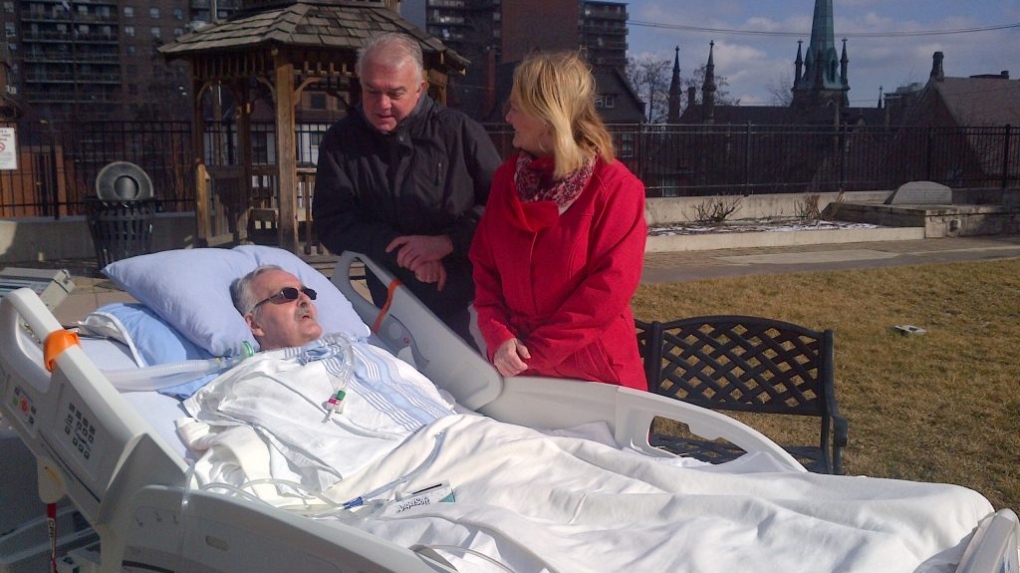 It was only November, but Dorothy Prowse’s hospital room in the intensive care unit at St. Joseph’s hospital in Hamilton, Ont. looked very much like it was the end of December.

Colourful lights were strung up, a Christmas tree was brought in, and friends and family huddled together to watch “A Christmas Story” that day in November 2017.

Even Prowse’s beloved pet dog was allowed to join the festivities.

“She had a cockapoo that she had for a decade and she loved it dearly. So the first thing she asked for was to have Shadow come and be in the hospital with her,” Joan Prowse, Dorothy Prowse’s twin sister, fondly recalled during an interview with CTVNews.ca on Saturday.

Knowing that her sister wouldn’t live long enough to enjoy Christmas that year, her favourite holiday, Joan Prowse asked the staff to bring Christmas to her.

The next day, Dorothy Prowse died at the age of 56 from breathing troubles related to years of complications from diabetes and a previous stroke.

“When she passed away she was surrounded by people who loved her and she had a smile on her face,” Joan Prowse said.

The Prowses weren’t the only ones who had their end-of-life wishes fulfilled by ICU staff at St. Joseph’s Healthcare.

One wish saw a family clad in cozy pajamas play one last board game together. Another involved a trip outdoors to simply feel the sunshine one last time.

There were also live musical performances, familial reunions, and even a wedding or two.

In all cases, the wishes were intended to honour the lives of their dying recipients as they spent their final days or hours in the intensive care unit.

For the patients’ families, these final acts of compassion provided them with the opportunity to celebrate their loved ones’ lives and connect with the hospital staff that who tended to them.

“It changed the focus of a negative experience into a more positive experience towards the end,” one daughter said. “We were able to focus on who my dad was, versus what’s happening to my dad.”

The wishes were made possible thanks to the Three Wishes Project, a program that sees hospital staff collaborate with families to fulfill dying patients’ end-of-life requests in four major cities in Canada and the U.S.

Meredith Vanstone, an associate professor of family medicine at McMaster University, said most of the wishes that families request at the end of their loved one’s life are simple and inexpensive.

“They’re just things like playing a board game, bringing someone outside, having a toast with their favourite Scotch to them, bringing a pet in to see them, putting up Christmas decorations,” she told CTVNews.ca during a telephone interview last week. “Things that are meaningful and personal to that person.”

The program was initiated at St. Joseph’s Healthcare hospital in Hamilton six years ago and has since been implemented at St. Michael’s Hospital in Toronto, Vancouver General Hospital in Vancouver, and the Ronald Reagan UCLA Medical Center in Los Angeles for a new research project led by McMaster University in Hamilton.

Vanstone, the first author of the study, said St. Joseph’s Healthcare received numerous inquiries from clinicians in North America and around the world about the possibility of expanding the program to other ICUs.

“[They asked] ‘Is this something we could do at our ICU? What do we need to know in order to both implement it and be able to convince the powers that be to support this program in our ICU?’” she said. “That was really the catalyst for the doing this research.”

To answer these questions, the researchers launched the Three Wishes Project in the Toronto, Vancouver, and Los Angeles’ hospitals to determine its value and sustainability in those new settings.

The study involved 730 patients and a total of 3,407 wishes that were realized by health-care providers at the four participating hospitals from 2017 to 2019. The academics collected data about patients and their wishes and conducted 167 interviews with the patients’ family members, health-care workers, and hospital managers and administrators to gauge their experiences with the program.

Vanstone said their findings indicated the Three Wishes Project had been a “resounding success” in all four of the hospitals involved in the study. The researchers said qualitative and quantitative data showed the program was an affordable clinical program that is valuable to family members, clinicians, and health-care institutions.

According to the study, the wishes only cost, on average, about $5 each to fulfill and three-quarters of them didn’t cost anything at all. Even the time required to realize the wishes was minimal, according to the clinicians’ responses.

Vanstone said the success of the project can also be measured by the fact that the program is continuing in all of the studies involved in the study.

For family members, the researchers said the program enhanced their experience of care and eased the bereavement process by encouraging connection with each other and the clinicians who recognized the dignity of their loved ones.

Joan Prowse experienced this firsthand when an ICU nurse found a bed for her to sleep in beside her sister’s hospital room the night before she died.

“I held her hand all night long,” Joan Prowse said. “I didn’t know she was going to die the next day. I thought she was going to live a couple of more weeks. I’m so happy that I had that last connection with her.”

Prowse attributed that nurse’s kindness to her involvement in the Three Wishes Project at St. Joseph’s.

“The whole ICU, because they’re involved in the Three Wishes program, they really come together and they think about the patient first and that’s the one thing I really, really appreciated,” Joan Prowse said.

The health-care workers who fulfilled the wishes also obtained value from the project because it gave them the opportunity to connect with their patients and their families.

“One of the pieces of value that came out of the clinician interviews was that it really strengthened their bond as a team, really brought them back into contact with the meaningfulness of the work and why they chose to become health professionals,” Vanstone said. “This was a way of reminding them of their vocation to help people and to be helpers.”

The study author said she hopes their findings will inspire other clinicians to implement similar programs in their own ICUs.

“I hope that this paper provides information and evidence to encourage people to go forward with whatever part of the program resonates with them and suits the needs of their site,” Vanstone said.

Joan Prowse said she would like to see the program expanded into all hospitals and not just in ICUs.

“It made all the difference for me,” she said. “My wish would be for the Three Wishes program to actually happen at the beginning when Dorothy entered the health-care system.”

The findings were published in the journal Annals of Internal Medicine on Monday.