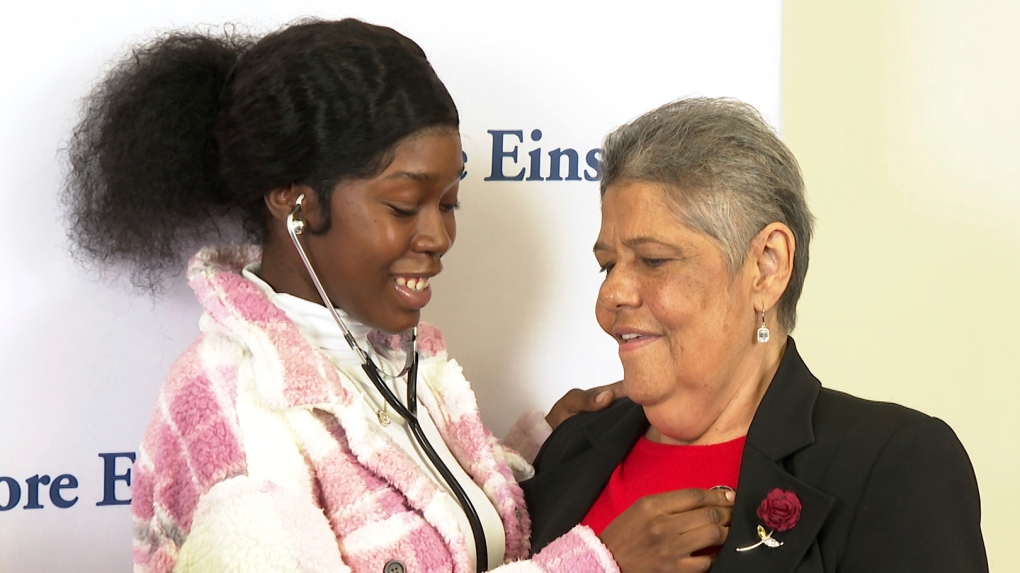 Brianca Newton uses a stethoscope to listen to her late sister Brittany Newton's heart beat inside transplant recipient Miriam Nieves at Montefiore Moses Hospital in the Bronx borough of New York, on Tuesday, Nov. 22, 2022. Doctors at the hospital say the transplant, performed in April, is the first time a heart from an HIV-positive donor was successfully transplanted into an HIV-positive recipient. (AP Photo/Ted Shaffrey)
NEW YORK -

Brittany Newton's family grieved last spring when her life was cut short, at age 30, by a brain aneurysm. But they got to feel close to her again this week, listening to her heart beating in the chest of a thankful New York woman whose life was saved by an organ transplant.

Miriam Nieves, 62, on Tuesday eagerly hugged Newton's mother and sisters, who she met for the first time at Montefiore Medical Center, where the heart transplant was performed last April.

"The only words that come this Thanksgiving for me is, I am so thankful and so grateful for science, for my family, for my God," Nieves said. "But I can't express enough that if it wasn't for the donors, they are my angels, because they are the ones that allow me this second opportunity."

Newton's mother, Bridgette Newton, carried a large photo of her daughter, a certified nursing assistant who had lived in Louisiana.

"My child is still walking around," she said. "And for that I will forever be grateful."

The married mother of three and grandmother of six started experiencing heart failure after problems with her kidneys.

In order to find a match when the shortage of donors is acute, doctors at the hospital expanded their search to include HIV-positive donors. Enter Newton, an organ donor whose family only learned of her HIV status after her death.

Doctors transplanted her heart and kidney into Nieves.

Newton's sisters, Breanne and Brianca Newton, used a stethoscope to listen to the beating heart. Breanne Newton said she wasn't surprised when she heard Nieves say she felt more energetic since the transplant.

"That was my sister. She had energy. She was a goer," she said, adding, "We are very, very thankful. And it's just a blessing."

Surgeons have been transplanting organs from HIV-positive donors to HIV-positive recipients for several years but doctors at Montefiore said this was the first such transplant of a heart.

"I think it's going to be done again because we've shown that it's safe," said Dr. Omar Saeed, a transplant cardiologist at Montefiore.

"The reality is that there are more people who need hearts than there are hearts available," said Dr. Vagish Hemmige, an infectious disease specialist at the facility. "The HIV heart transplant program enables people living with HIV to receive life-saving transplants from donors that otherwise wouldn't be used."