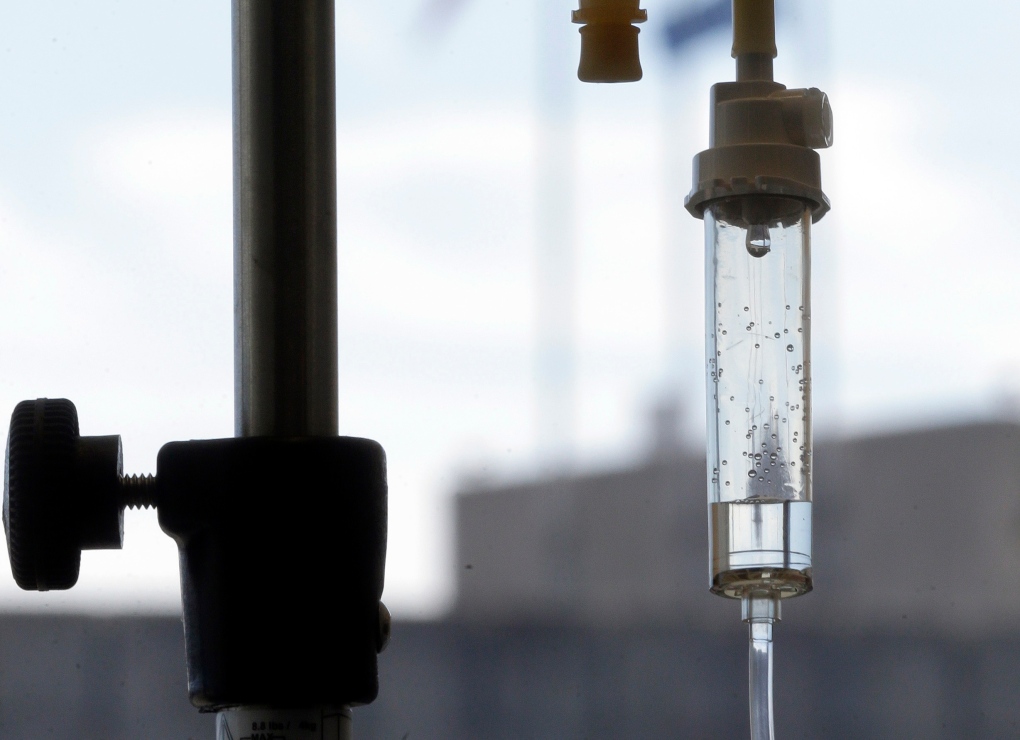 An infusion drug to treat cancer is administered to a cancer patient via intravenous drip at Duke Cancer Center in Durham, N.C., on Sept. 5. 2013. (AP / Gerry Broome)

WASHINGTON -- A provocative study in mice suggests something as simple as breathing in extra oxygen might give immune cells a boost in attacking cancer.

The immune system often can spot and destroy abnormal cells before they grow into cancer. But when tumors manage to take root, they put up defences to block new immune attacks. Wednesday's study takes aim at one of those shields.

With the extra oxygen, "you remove the brake pedal" that cancer can put on tumour-fighting immune cells, said Michail Sitkovsky, director of the New England Inflammation and Tissue Protection Institute at Northeastern University, who led the work.

Here's what happens: Tumors can grow so rapidly that they outpace their blood supply, creating a low-oxygen environment. The lack of oxygen in turn spurs cancer cells to produce a molecule called adenosine, which essentially puts nearby tumour fighters called T cells and natural killer cells to sleep, explained pharmacologist Edwin Jackson of the University of Pittsburgh, who co-authored the study.

Lots of research is under way to develop drugs that could block the adenosine effect. But Sitkovsky's team wondered if just getting more oxygen to an oxygen-starved tumour could strip away that defence.

So they put mice with different kinds of lung tumors inside chambers that mimic what's called supplemental oxygen therapy. Air is about 21 per cent oxygen, but hospitals can give patients concentrations of 40 per cent to 60 per cent oxygen through masks to treat various disorders.

The extra oxygen changed the tumour's environment so that immune cells could get inside and do their jobs, the researchers reported Wednesday in the journal Science Translational Medicine.

Tumors shrank more in the high-oxygen group, especially when the researchers combined the oxygen with injections of extra tumour-fighting T cells, what's called immunotherapy. Extra oxygen had no effect in mice genetically engineered to lack those immune cells. Immunotherapy is a hot field in cancer research, as scientists try to figure out how to spur the body's own ability to fight tumors.

The study is exciting, said immunologist Susanna Greer of the American Cancer Society, who wasn't involved with the research and cautioned that it must be tested in people.

"If this works, there is the potential that what they're doing could very easily synergize with other cancer immunotherapies that we know work," she said.

"The beauty is that oxygen per se is so well-tolerated," added Dr. Holger Eltzschig, an anesthesiologist at the University of Colorado in Denver who studies low-oxygen effects and also wasn't involved in Wednesday's study.

He said the data was compelling enough to start testing the approach by adding supplemental oxygen to certain cancer therapies.