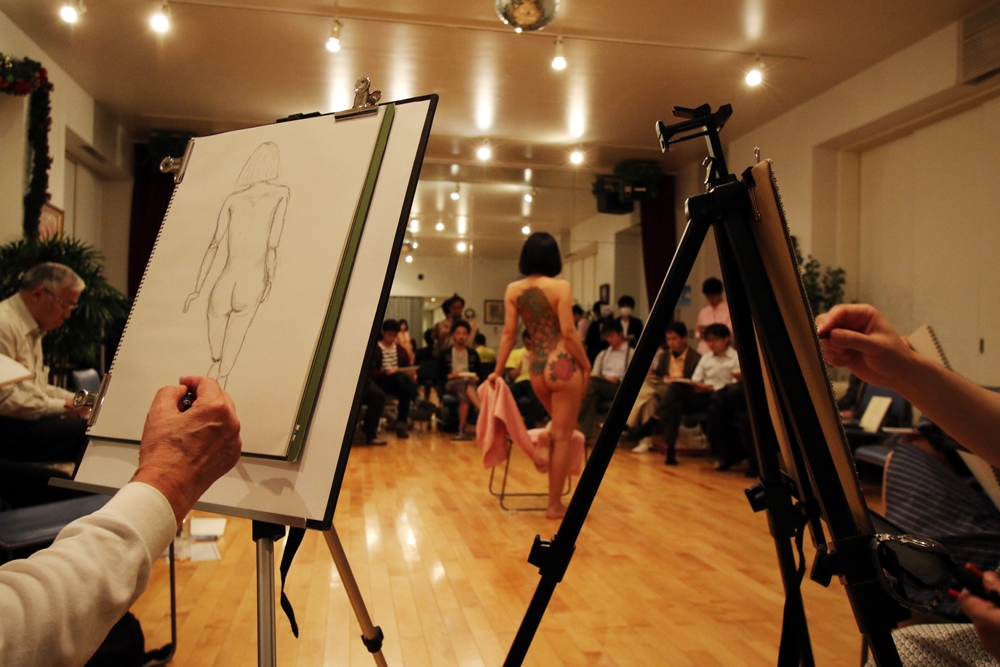 This picture taken on April 26, 2015 shows people, including middle-aged men, sketching a nude model at a studio in Tokyo. (AFP / Yoshikazu TSUNO)

Takashi Sakai is a healthy 41-year-old heterosexual man with a good job and a charming smile. But he's never had sex, one of a growing number of middle-aged Japanese men who are still virgins.

Sakai has never even had any kind of relationship with a woman, and says he has no idea how he might get to know one.

"I've never had a girlfriend. It's never happened," he said. "It's not like I'm not interested. I admire women. But I just cannot get on the right track."

It might sound like the subject for a Hollywood comedy, but far from being the social misfit portrayed by Steve Carell in 2005's "The 40-Year-Old Virgin", Sakai is one of a crowd.

A 2010 survey by the National Institute of Population and Social Security Research found that around a quarter of unmarried Japanese men in their 30s were still virgins -- even leading to the coining of a specific term, "yaramiso", to describe them.

The figure was up around three percentage points from a similar survey in 1992.

The period corresponds with Japan's prolonged economic slowdown, after a stock and asset bubble burst and the one-time financial powerhouse suffered years of lacklustre growth.

Matchmaking expert Yoko Itamoto says the economic emasculation has taken its toll on Japan's men, as more of them struggle to find secure, full-time jobs.

"Many men seem to have lost confidence as they've lost their economic muscle," she said.

"In the past two decades, the situation for Japanese men has been very tough and competitive."

The pain caused by an inability to form emotional and physical relationships with women is something that one 49-year-old architect, who did not wish to be named, knows too well.

Only twice in his life has he had romantic and sexual feelings for a woman -- the first time in his mid-twenties and then again two decades later.

"It was devastating," he told AFP. "It seemed to invalidate my life and take away my reason to live."

On both occasions he suffered rapid weight-loss, and now fears he might live life as a singleton and a virgin.

Directly comparable international statistics are difficult to come by, but Japanese people across the board appear to have less sex than those in other developed countries.

In the 2010 survey quoted above, 68 percent of 18-19 year olds in Japan said they were virgins; a study carried out that year in Europe by condom maker Durex found virginity rates among those aged 15-20 were much lower.

For example, fewer than 20 percent of young Germans had not had sex by the time they hit 20, while even in socially conservative Turkey, the figure was only 37 percent.

For Shingo Sakatsume, there is something of a conundrum about modern Japan: a country where images of sex are everywhere -- on television, in comic books and on many city streets -- yet serious conversations about it are few and far between.

"In today's Japan, we have no place to learn about sex or how to form a romantic relationship," he said.

"Even if the person has disabilities, one who recognises and accepts his own sexuality tends to be able to build balanced relations with others," he said.

"People who are not sexually mature tend to get timid socially."

He now also caters to able-bodied people whose attitudes to sex can prove something of a barrier to their finding fulfilment.

This includes offering lectures on how to find a partner and how to establish a constructive relationship in his "Virgin Academia" programme.

But nowadays, "it is now all up to each individual to find a potential partner and negotiate for sex".

The 41-year-old Sakai has enrolled in the Virgin Academia and goes to life drawing classes, where he sketches naked women as part of a scheme to help participants understand the female body.

"The first time I did this, in autumn last year, oh... I was so amazed. Their bodies are incredibly beautiful," he said.

"One thing I learned is that there are many different shapes of breasts and even genitals," he said.

Sakai feels his time at the Virgin Academia has been useful. He doesn't know if he will ever pass that particular milestone, but the course has helped him to see his lack of sexual experience as less of life or death thing.

"There is no need to be so pessimistic," he said. "After all, being a virgin isn't fatal."