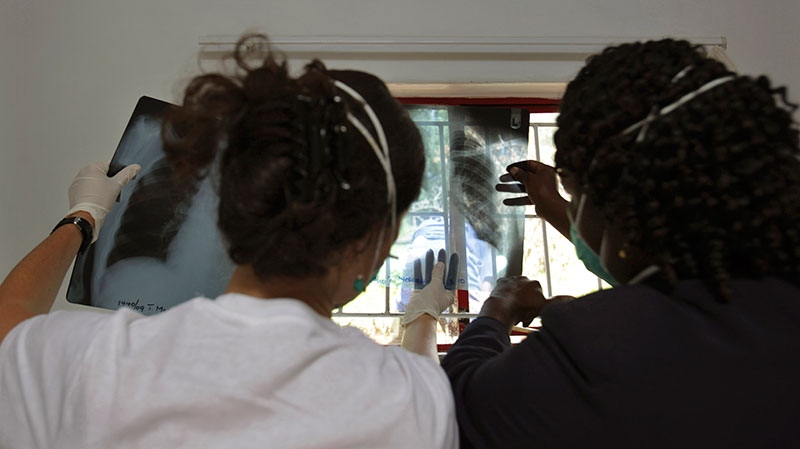 A patient's x-rays are examined at a clinic at Masemouse, Lesotho, in this file photo dated March 17, 2010. (AP / Denis Farrell)

LONDON -- The world's most advanced tuberculosis vaccine failed to protect babies against the infectious disease, according to a new study in South Africa.

The vaccine, MVA85A, was designed to improve protection from the only existing tuberculosis vaccine, BCG, which is routinely given to newborns. Though the new vaccine appeared safe, scientists found no proof it prevented tuberculosis, an airborne disease that kills more than 1 million people worldwide every year.

Previous tests of the vaccine in adults had been promising and researchers said the trial provided useful data to inform future studies. There are a dozen other TB vaccines currently being tested.

Some health officials were discouraged by the results. "It's pretty disappointing," said Dr. Jennifer Cohn, a medical co-ordinator at Doctors Without Borders, who was not part of the study. "Infants are at really high risk of TB but this doesn't seem to offer them any protection."

MVA85A was developed at Oxford University and was tested in nearly 2,800 infants in South Africa who had already been given a BCG shot, between 2009 and 2011. About half of the babies got the new vaccine while the other half got a placebo.

No serious side effects related to the vaccine were reported.

The study was paid for by Aeras, the Wellcome Trust and the Oxford-Emergent Tuberculosis Consortium. The results were published online Monday in the journal Lancet.

"There is much that we and others can learn from the study and the data it has produced," said Helen McShane of the University of Oxford, one of the study authors, in a statement. She and colleagues are further analyzing the samples from the trial to better understand how humans become infected with TB bacteria.

McShane and her co-authors wrote that the vaccine could potentially protect adolescents or adults against TB since their immune systems work differently from those of infants. The shot is also currently being tested in people with HIV.

"If this vaccine is effective in adults, that would be hugely valuable because the majority of TB disease and deaths are among adults," said Richard White, an infectious diseases expert at the London School of Hygiene and Tropical Medicine. "But no one knows the answer to that right now."

"A vaccine is likely to be a cost-effective way of preventing TB," he said, comparing the $650 million that has been invested into vaccine development in the past decade versus the more than $4 billion it currently costs to control the disease every year, according to the World Health Organization.

White also warned the world couldn't afford to ignore the spike in TB and its drug-resistant forms. "There are certain boroughs of London that have higher rates of TB than parts of Malawi," he said. "TB is such a big problem that we really need to throw the book at it."