Running during winter? Slowing down can help avoid injury 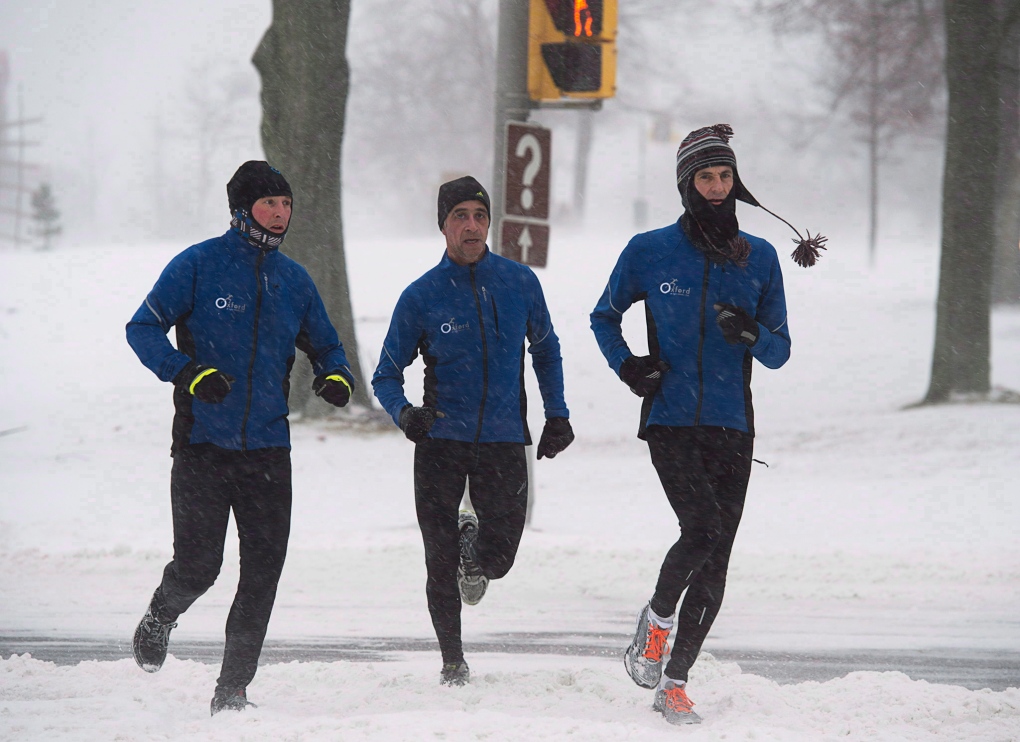 Even as the temperatures nosedive, there has been no dip in productivity for Al Garlinski, who continues to log between around 80 and 97 kilometres a week as part of his running routine -- with some adjustments.

"You have to be more aware of your surroundings," said Garlinski, a member of the Manitoba Runners' Association.

"In the summertime, you're just sort of in the lockdown mode and you just focus on running ahead. With the winter, you're so cautious about your footing, you're taking shorter strides, you're wearing ice grips on your runners, which a lot of runners will do for safety's sake."

The Winnipeg running enthusiast said he prefers to use ice grips on his shoes for "peace of mind," but still demonstrates extra care. If Garlinski approaches an icy patch while out running, he'll simply stop and walk around it. And when temperatures drop to around -25 C, he'll run indoors, usually joining friends for laps around different tracks in the city.

Still, Garlinski's first choice is take his strides outside -- even when it's chilly.

"It's still an exhilarating experience. You've got the fresh air in your lungs, even though it's cold, but you feel better after the run," said the 50-year-old.

"In a controlled environment, when you've got the room temperature and you're running on the track with that boredom, it's still not the same."

Running on ice-slickened sidewalks, paths and trails has the potential to cause injury unless key modifications are made.

"When the snow falls or when it gets icy out, the natural thing for a runner to do is to increase their stride width -- so they run with their feet a little further apart -- and they decrease their stride length. They take more steps per kilometre, they take shorter, choppier steps," said Reed Ferber, director of the Running Injury Clinic at the University of Calgary.

In order to reduce their injury risk, Ferber said they tell runners that they need to run in that manner to retain stability in slippery conditions.

"They need to reduce their mileage, reduce their intensity and get stronger and more flexible because of that biomechanical pattern."

Research has shown that hip strength -- specifically in the gluteus medius, the muscle on the side of the hip -- is critical in terms of maintaining balance, Ferber said.

"The only muscle that controls your side-to-side balance is your gluteus medius. If you're running in slippery conditions, you're in an unstable situation. Strength of that muscle is critical in order to improve your balance."

He recommended doing strengthening exercises daily and anytime after a run to avoid causing fatigue beforehand. The Running Injury Clinic's website features videos of some common muscle strengthening exercises aimed at preventing and treating running injuries, several of which require use of a resistance band: http://runninginjuryclinic.com/resources/exercise-videos/

"Stretching is also important because when you decrease your stride length, you're taking shorter, choppier steps, you're going to be using your hip flexors -- the muscles in the front of your hip -- and you're going to be using your hamstrings and your glutes -- the muscles in the back of your hip and your leg -- a lot more," Ferber said.

What about people who don't modify their approach and continue to run as quickly as they normally would?

"The risk is that you're going to slip," Ferber said. "If you take a big long stride, you're going to land on your heel most likely. Ninety-five per cent of runners strike the ground with their heel first, and by doing that, your foot is going to slip out from underneath you."

Bruce Raymer laced up in ultra-chilly conditions while living in Saskatchewan and remembered what he described as one of his most "savage" runs in Regina.

"It was -40 with the wind chill, and it was so cold that your eyelashes would start sticking together," recalled Raymer, a Canadian marathon champion and former member of the national team.

As a run coach and personal trainer serving the Greater Toronto Area and Ontario's Durham Region, Raymer said he usually tells clients to get shoes with an "aggressive" tread; but for the most part on really bad days, most will run indoors on a track or treadmill -- himself included.

"If it comes down to footing or temperature, they'll take footing any day because they just want to get out there and get the run in," he said.

If weather is consistently bad, some clients like to cross-train to give running a break, Raymer said.

"They'll just view it as a chance to do something else, maybe hit the weight room and do some strength stuff and do some core, do some stuff that maybe they don't pay as close attention to when they're running all the time."

"We see a lot of people that undertake yoga, Pilates, they do a lot of core (work), but they still neglect the hip and pelvis musculature. All of it is one functional unit."

As for ice traction devices, Ferber said the decision to use them is entirely individual.

"We completely leave it up to the runner. And there's zero evidence to support or refute they're injury-protective or injury-causative properties," he said.

"For the simple fact that it's going to grip the ice and it's going to give you better traction, that's great. But if it changes your biomechanics, if it changes the fundamental way that you run enough that it causes a different type of injury, maybe that means that that person shouldn't run in those devices."

Ferber said they always ask runners to be reasonable and listen to their bodies, which includes staying in if they simply find conditions too chilly.

"If your goal was to run 5Ks, for example, but your body is telling you that either it's too cold out or you're starting to get injured, there's no reason why you can't shorten that to a 2K or 3K run," he said. "We want runners to listen to their bodies and they can make good decisions based on that."