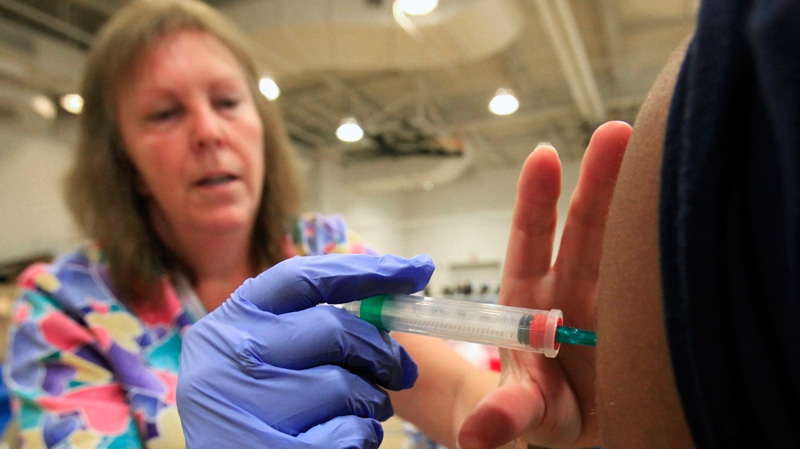 VANCOUVER -- It probably tastes better than snake oil, but a B.C. company's claim that its oregano oil supplement is an effective alternative to the whooping cough vaccine has created a serious public health hazard, a regional health authority says.

The Fraser Health Authority has ordered Enerex Botanicals Ltd. to publish a retraction after the company ran an ad in the Vancouver Sun newspaper earlier this week promoting its oil of oregano product as "the natural way to help combat whooping cough."

The ad, which pictures packages of the supplement next to a vaccine needle that's been snapped in half, says: "It's nice to know that vaccines aren't the only choice to combat this highly contagious bacterial disease."

But Enerex's claim that oregano oil can replace the whooping cough vaccine is not only unsupported by any evidence, and it also poses a health hazard if it encourages members of the public to skip the vaccine, said Dr. Paul Van Buynder of the Fraser Health Authority.

"We were worried that there were going to be parents and people out in the general community that, rather than listening to our message about vaccinating and protecting children, would use oil of oregano and then be exposed to the risks of this disease."

Earlier this year, Van Buynder raised the alarm over a rash of whooping cough infections in the Fraser Valley, with more than 100 confirmed or suspected cases in the span of two months.

Similar increases in infections have prompted warnings across Canada and the U.S. for the public to get vaccinated, particularly for people who come into contact with young children.

Van Buynder wrote Enerex a two-page letter alleging the ad violates the B.C. Public Health Act, which makes it illegal to create a health hazard by interfering with the suppression of an infectious agent.

The letter demands the company print a retraction that is at least as large as the original ad, which was about 20 centimetres by 15 centimetres. The retraction must state that oil of oregano is not effective in preventing whooping cough and include an apology for publishing misleading statements, the letter says.

Enerex's marketing manager, Ryan Totten, said the company would not be commenting until it decides how to respond to Fraser Health.

Van Buynder said Enerex has until next Tuesday to submit a draft of its retraction, but he said as of Friday, the health authority hasn't heard from the company.

If the company doesn't comply, Van Buynder said the health authority could seek an injunction to force it to publish the retraction. He added the company may also be violating federal laws against misleading health claims and could be investigated by Health Canada.

Van Buynder said the company's ad contributes to public skepticism and fear around vaccines, which has caused some parents to skip vaccinating their children due to unfounded fears about potential side effects.

"This is absolutely another contribution" to the anti-vaccine trend, said Van Buynder.

"It's a battle between people who say, 'We don't need to vaccinate children.' We respect the fact that people want to get good information, and that this is a very important public debate. What we don't respect is blatant untruths to be told about alternative products."

Whooping cough, or pertussis, affects the respiratory tract, according to a fact sheet prepared by the B.C. Centre for Disease Control.

Initial symptoms are similar to the common cold, but an infected patient eventually develops coughing spells so bad they may cause patients to gag or throw up. Infections can last as long as two months.

In serious cases, whooping cough can case pneumonia, seizures and even brain damage.

Babies and young children are particularly vulnerable to whooping cough, killing one in every 170 infants who contract the disease.