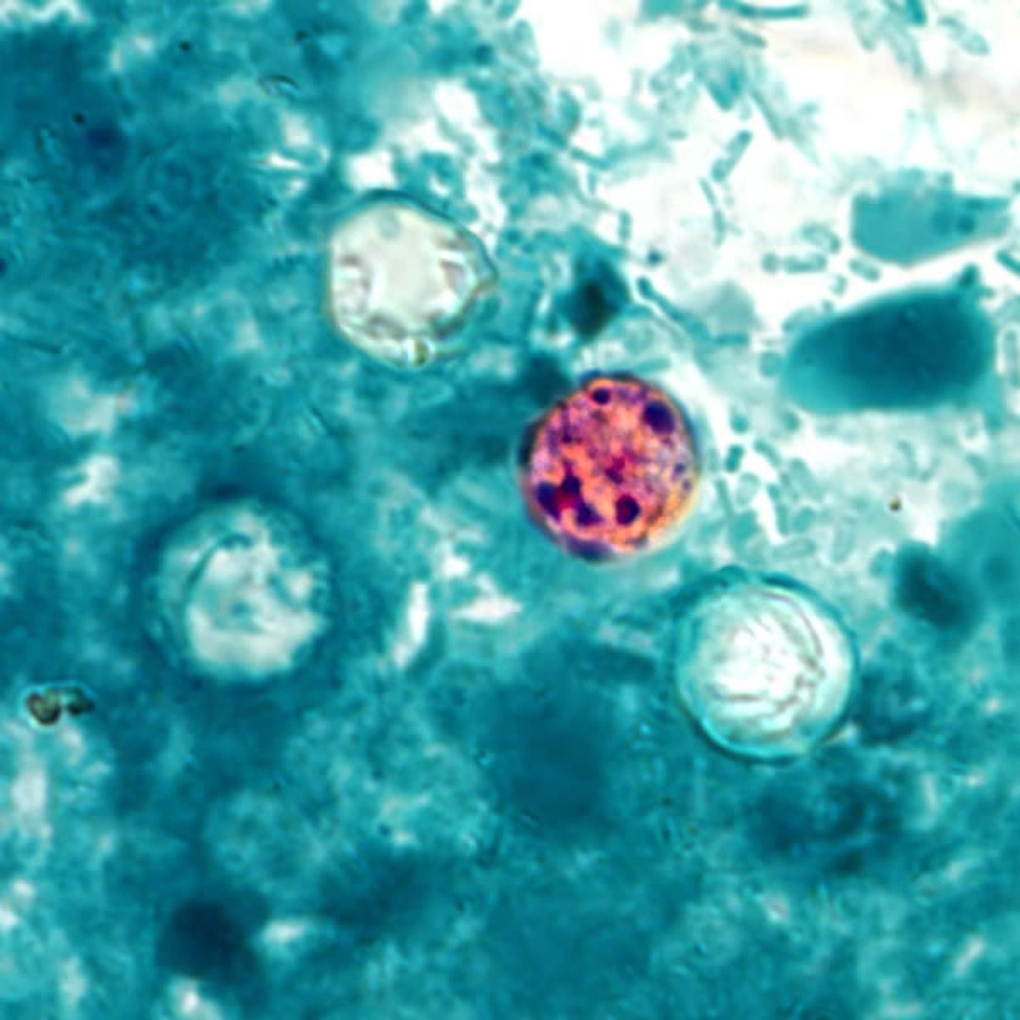 A photomicrograph of a fresh stool sample, which had been prepared using a 10% formalin solution, and stained with modified acid-fast stain, reveals the presence of four Cyclospora cayetanensis oocysts in the field of view in this image provided by the Centers for Disease Control and Prevention.

DES MOINES, Iowa -- The outbreak of a stomach bug two states have linked to bagged salad came as little surprise to food safety experts, who say the process of harvesting, washing and packaging leafy greens provides numerous opportunities for contamination.

Although nutritionists stress the chances of getting sick from vegetables are low compared to the dangers of a diet without them, packaged salads heighten the risk because leaves from several batches often are mixed together.

"The washing and comingling of different batches of lettuce means a hazard that may appear in one field can show up in lots of bags of lettuce because of the common bath," said Caroline Smith DeWaal, director of the food safety program for the Center for Science in the Public Interest, a consumer health advocacy organization based in Washington.

Officials in Iowa and Nebraska say a packaged salad mix containing iceberg and romaine lettuce, carrots and red cabbage was infected with cyclospora, a parasite blamed for sickening 397 people in 16 states. It's not clear whether the produce also was to blame for the outbreak in the other states.

Last year the Food and Drug Administration issued more than 20 recalls for packaged salads, romaine lettuce or spinach. Most were due to tests finding listeria or E. coli bacteria, both of which can cause serious illness.

However, of the 693 food product recalls between October 2011 and September 2012 -- the last available year of records -- only about 15 pertained to bagged lettuce or salads, according to FDA data.

The U.S. Centers for Disease Control and Prevention has estimated that one in six Americans -- 48 million people -- get sick from foodborne illnesses each year. About 128,000 are hospitalized and 3,000 die.

In March the CDC released a study that looked at more than 4,500 food-related outbreaks between 1998 and 2008 and found more illnesses attributed to leafy vegetables -- 22 per cent -- than to any other food. The agency didn't say what percentage of those was packaged.

Dr. Robert Tauxe, the CDC's deputy director of foodborne, waterborne and environmental diseases, said the industry that cuts and bags fresh produce has made significant improvements in its processes since 2006. An outbreak that year tied to E. coli-contaminated spinach caused three deaths and sickened 205 people.

"A lot has been done so that actually the bagged lettuce-type produce is a good deal safer now that it was five years ago," he said.

Michael Doyle, director of the University of Georgia's Center for Food Safety, said lettuce is susceptible to contamination because it grows close to the ground and is more susceptible to microbial contamination. Water used for irrigation can be contaminated, and there could be issues with workers lacking good hygienic practices, he said.

"There are a lot of inherent issues and that's why we're seeing so many recalls and problems," Doyle said. "I don't eat bagged salads if I can avoid them. I haven't for a long time because I know how they're processed and there's no true kill step in that process that will kill harmful bacteria in the lettuce."

Head lettuce is easier to clean because contaminants reside on the outside leaves, which can be removed and the head washed. Leaf lettuce like romaine and spinach, often the subject of recalls, are harder to clean because of their stalky nature.

When lettuce is cut it attempts to heal the cut by sealing it to keep moisture in, but if a processing facility has contaminated water that sealing process could also seal in some contaminants into the leaf, making them more difficult to wash away, Doyle said.

The organization estimates about 50 billion servings of leafy green vegetables leave California and Arizona every year and little of it has any issues.

"Any illness is too many, but the reality is the food supply is very safe," he said.

Packaged salad mixes are about 14.8 per cent of the $45 billion fresh vegetables market, according to Progressive Grocer's 2012 Consumer Expenditures Study released in September. That $6 billion in sales has grown significantly from about $600 million a decade ago.

Cyclospora is caused by parasites that are spread when people ingest food or water contaminated with feces. People who are exposed usually become sick after about a week and have bad diarrhea and other flu-like symptoms that can last from a few days to several months if untreated with antibiotics.

Iowa Epidemiologist Dr. Patricia Quinlisk said she is convinced the product that sickened people is gone, either eaten or expired.

"I would feel very comfortable buying or eating at a restaurant prepackaged salad mixtures," she said. "The risk would be so low as to not discourage me from it."

Jennifer Nelson, an associate professor of nutrition at Mayo Clinic College of Medicine, said ultimately consumers shouldn't shy away from an otherwise important part of a healthy diet because of a small risk of contamination.

"Any food does bring along with it some inherent risk. It all gets back to common sense in food preparation," she said. "If you are going to be eating leafy greens be sure you wash them, even prewashed lettuce. Give it several good washes and rinses and you're about as assured as you can be of being as safe as possible."