Forget expensive facials and moisturizers. A world-first study out of Australia shows that sunscreen could be the skin’s best defence against signs of aging.

A study of 900 young and middle-aged men and women showed year-round use of sunscreen significantly slows the aging of the skin that’s caused by the sun’s damaging ultraviolet rays.

“This has been one of those beauty tips you often hear quoted, but for the first time we can back it with science,” Professor Adele Green of Queensland Institute of Medical Research said in a statement. “Protecting yourself from skin cancer by using sunscreen regularly has the added bonus of keeping you looking younger.”

The research shows that even sun-lovers who have neglected to protect their skin for some time could benefit from beginning daily sunscreen use.

“The study has shown that up to middle age, it’s not too late to make a difference,” Green said.

She said, more importantly, regular sunscreen use also decreases the risk of skin cancer in the long term.

“And of course, along with seeking shade and wearing clothing cover, sunscreen is a mainstay of sun protection,” Green said. “It prevents sunburn in the short-term and skin cancer in the long-term.”

The research -- part of QIMR’s long-running Nambour Skin Cancer Prevention Trial -- involved half of the participants regularly using SPF15+ sunscreen on their face, arms and hands and the other half using sunscreen in their usual way, if at all.

Participants had casts made of the top of their hands to measure fine lines and wrinkles that signal sun-caused aging over the study period.

Australia has one of the world's highest rates of skin cancer, and the aging research stems from a larger cancer-prevention study done in the 1990s. Researchers tracked participants for a decade before concluding that regular sunscreen use indeed lowered their risk of cancer.

The study also tested whether a dietary supplement, beta carotene, could slow photoaging. However, researchers found no evidence that it helped.

Dermatologists have long urged year-round sunscreen use -- especially for constantly exposed skin on the face, hands and women's neck and upper chest. However, they say too few people heed that advice.

“A bottle of sunscreen, if you’re putting it on properly, really should last you a week or two, not the whole season,” Winnipeg-based dermatologist Dr. Victoria Taraska told CTV News.

Canadians are exposed to, on average, 18 hours of incidental sunlight each week from activities such as exercising and driving. Meanwhile, dermatologists warn that skin cancer rates across the country are on the rise, with more than 80,000 cases diagnosed in 2012.

Taraska said sunscreens with a SPF of 15 or higher, with both UVA and UVB protection, should be used generously each day.

Experts say that sunburns, especially in childhood, have been linked to a greater risk for melanoma, the deadliest skin cancer. However, overall UV exposure also plays a role both in melanoma and in other skin cancers.

Along with wearing sunscreen with an SPF of at least 15, Heath Canada says the best protection against UV exposure is to avoid the sun between 11 a.m. and 4 p.m., look for shade on sunny days and wearing protective clothing, such as a large-brimmed hat, when the UV index is three or higher. 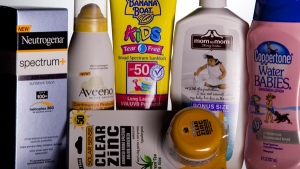 Is a higher SPF better? How to pick the right protection