With reports of hospital emergency rooms under strain and cases of flu, RSV and COVID-19 spiking across Canada, health care has surpassed inflation and jobs as the top national issue of concern, according to Nanos Research’s weekly tracking. 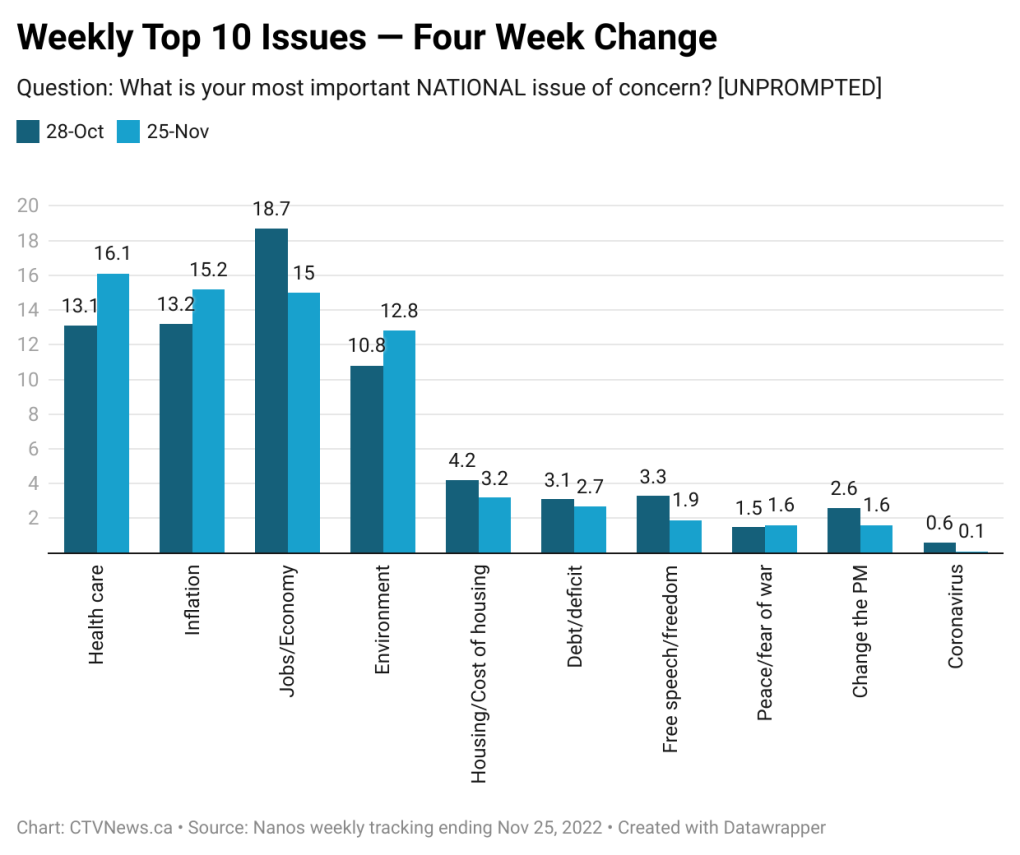 The latest Nanos tracking shows a four-week change in the top unprompted national issue of concern – unprompted meaning the Canadians surveyed were not provided a list of issues to choose from.

While concern over inflation rose two percentage points over the same period, health care surpassed it and is now at the top of the list at 16.1 per cent, up a full three percentage points in the last four weeks.

“What we’re seeing is that an increasing number of Canadians are focused on health care as their top unprompted national concern, it’s what they're increasingly worried about right now,” said Nanos Research Chair Nik Nanos on the latest episode of CTV News Trend Line.

Health care is also at a two-year high as a national issue of concern, according to Nanos, and it’s been a top concern in Ontario since May – where 89 per cent of respondents said investing in health care was an important priority.

In late November, leaders from five of Ontario’s largest health-care unions issued an urgent appeal to Premier Doug Ford’s government to help ease overburdened hospitals, asking for more investment in staffing rather than spending money in private clinics in order to free up hospital beds. The provincial government also announced in summer that they would be expanding some surgeries into private clinics in an attempt to address backlogs -- a move experts are worried could lead to increased privatization.

The problem extends far beyond Ontario, with reports of health-care systems nationwide struggling to keep up amid staff shortages and a “tripledemic” of COVID-19, flu, and RSV cases.

When it comes to public anger and who Canadians are blaming for the crisis in health care, Nanos said it’s not any individual level of government; instead, “they’re blaming everyone.”

“The reality is that provinces deliver health care as part of their constitutional mandate. But the federal government plays a significant role in funding health care,” said Nanos. “What we know from the polling is that there's been consistent support for publicly-funded health care across Canada, and consistently over time, it's kind of like part of our identity.”

Nanos added Canadians tend to get nervous when politicians refer to any kind of "American style" private health-care system, which is why governments tread "very carefully" around any perception of privatizing health-care services "because they know that it can be a very risky strategy, depending on what they say."

"So I'm not surprised that the Ford government is that soft pedalling anything related to … privatization and connecting that to changes in the health-care system," he said.

Nanos Research conducted 1,000 random interviews recruited from an RDD land-and cell-line sample of Canadians aged 18 years over, ending November 25, 2022. The data is based on a four week rolling average where each week the oldest group of 250 interviews is dropped a new group of 250 is added. A random survey of 1,000 Canadians is accurate 3.1 percentage points, plus or minus, 19 times out of 20.