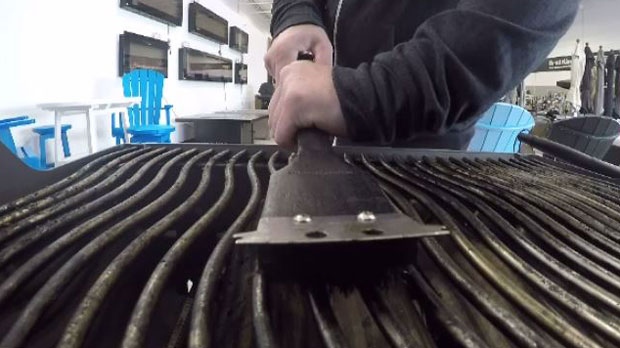 Health officials in Manitoba said it’s important to use common sense, and replace barbeque brushes regularly to avoid injury or a trip to the emergency room.

TORONTO -- Health Canada is conducting an investigation into the safety of wire-bristle brushes used to clean barbecues, with plans to conclude the probe by the end of the summer.

The agency said the risk assessment on the brushes comes after it has received nine reports of injuries from wire bristles since 2011.

The assessment started in April and should wrap up in August, said Tyler Goodier, unit head of mechanical and physical hazards in Health Canada's consumer product risk management bureau.

"What we're looking at here is: 'are some brushes worse than other brushes? Is this just a matter of brushes wearing out over time? How can we tell the difference?" Goodier said.

The agency's website warns that there is a risk of bristles getting lodged in food and swallowed, especially with older brushes.

Medical professionals have warned that injuries from swallowing wire bristles are uncommon, but sometimes serious enough to require surgery.

Recalls of the brushes or stopped sales are a possibility depending on the assessment's findings, said Goodier. But even if investigators find that wire-bristle barbecue brushes are harmful, Goodier noted that they might not be pulled from shelves.

"Just because something causes harm to Canadians doesn't mean that it always amounts in a recall or a prohibition," Goodier said, adding that investigators try and use the least intrusive means to solve a safety problem.

An outright ban would be quite rare, Goodier said, because it would have to be written into law -- a big step for regulators.

Reports of injuries from wire-bristle barbecue brushes have already prompted some people to ditch their old wire brushes.

Nadine Chappellaz, 39, from Winnipeg said that after seeing news stories on injuries from wire brushes, she threw hers out at the beginning of the summer.

"A lot of them were local, and this summer it seems to be a lot of kids," she said. "It didn't take very many stories and I started noticing -- everybody on Facebook was switching over."

She switched over to a wooden barbecue brush sold by Costco, but said they've been hard to find.

"Every time I go, they never have any left," she said, adding that they've also been difficult to find in other stores and even online.

Jessica Kuepfer, a spokeswoman for Home Hardware, said the retail chain hasn't heard from Health Canada about a risk assessment but will be watching for the results of the agency's investigation.

"We're going to be keeping a close eye on this," she said. "If there are any developments, we will absolutely, completely remove that from our product line, because customer safety is number one."