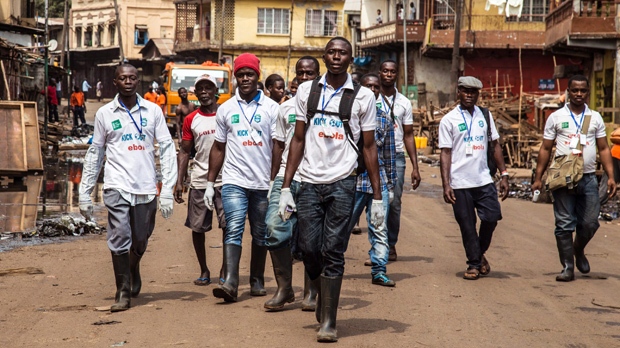 In this file photo taken on Friday, March. 27, 2015, a team of Sierra Leone health workers walk as they look for people suffering from Ebola virus symptoms or people they can educate about the virus as there country enters a three day country wide lockdown on movement of people do to the Ebola virus in the city of Freetown, Sierra Leone. (AP Photo/ Michael Duff,File)

FREETOWN, Sierra Leone -- Sierra Leone is in a stronger place than it was six months ago to fight Ebola, but the new challenge is to get to zero cases, the director of the U.S. Centers for Disease Control and Prevention said Monday during a visit, as new cases emerged in the city and in an area that had not seen the deadly virus for months.

Two new cases of Ebola surfaced in Sierra Leone's Northern Tonkolili District after a man died last week. The district had not had a single case of Ebola in five months. The victim contracted the disease in the capital, travelled to his home village, and was treated for a fever at the local hospital but authorities didn't call the Ebola emergency number. He didn't have a burial that followed special procedures required for Ebola victims.

"We now know where the virus is and we are tracking its movement, by surrounding, containing and eradicating its last remaining chain of transmission," Sisay said.

Dr. Thomas Frieden, CDC director, said it was important that the case was identified and not missed, and he was impressed with the speed of the response.

"The challenge now is to get to zero cases and that is not going to be easy," he said. "Authorities must not let down their guard. The country should keep its guard up."

He said a new cluster of cases in an area of Freetown means Sierra Leone must still put in place measures that have worked in the past.

This Ebola outbreak has killed more than 11,200 people worldwide with nearly all deaths in Guinea, Sierra Leone and Liberia.