Graphic warnings and images on cigarettes are effective: focus groups 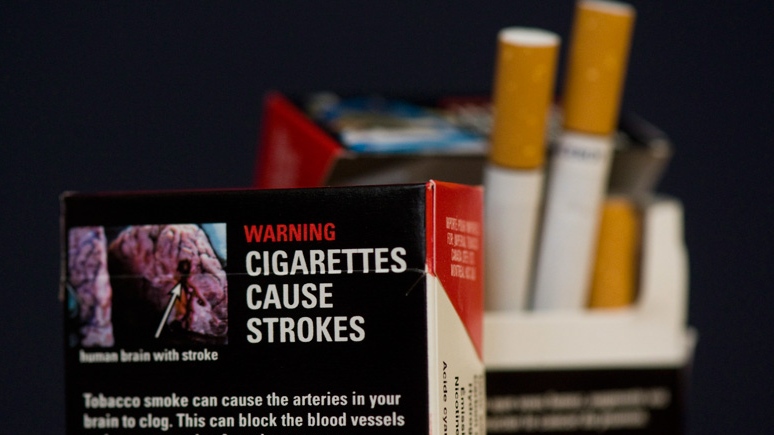 OTTAWA -- One image shows a woman's torso with a cigarette being burned into her bladder through underwear. Another depicts a man holding a colostomy bag, adding the words, "You may need to use a bag as a toilet for the rest of your life."

There's also a naked man holding a sign over his lower body that says, "out of order."

The federal government is testing graphic new warnings to wrap around cigarette packages, and the stark message is clear: smoking is bad and it can damage more than your lungs.

The proposed warnings, shown to focus groups across the country, are meant to reinforce what people already know about cigarettes and add information that's less widely known.

Canadians reported that cigarette packages with graphic images and pointed health warnings are more effective than cliches or rhyming slogans.

The health warnings considered most effective flag types of ailments smoking can cause, like colorectal and stomach cancers, as well as oral diseases and damage to blood vessels. The warnings are accompanied by explicit images showing real people who are suffering from the problems.

Youth smokers and non-smokers, as well as young adult and adult smokers were asked to assess mock-ups of 39 potential health warnings for cigarette packages and 11 potential taglines to accompany them, which include contact information for those wishing to seek help.

The government's planned Tobacco Products Labelling Regulations currently require 16 rotating health warnings on packages of cigarettes and little cigars, though that number could change when the labelling regulations are amended.

Youth participants, aged 15 to 19, noted learning new information in the focus groups, like the fact colorectal cancer could result in reliance on a colostomy bag. Vomiting blood as a symptom of stomach cancer was unknown to most participants. Young people also reported learning that smoking can result in erectile dysfunction.

The health warnings that people found least effective had broader messages, like "Smoked to death" and "Thought you would only try it once?"

But some of these warnings didn't match their picture, and that didn't jive with participants. For instance, in the text warning "Smoked to death," the picture was of a person who's alive.

Participants said images considered unrealistic, like a gangrenous foot, were less credible because they didn't believe it could be caused by smoking alone. While most were aware that cigarettes damage blood vessels, many did not know that loss of circulation can cause gangrene. And some young participants said they did not know what gangrene is.

This wouldn't be the first time Health Canada had put real people suffering from a tobacco-related illness on a cigarette pack. In 2004 Barb Tarbox, a well known anti-smoking activist who died of cancer at 42, was featured on packages.

Health Canada says messages depicting people with compelling stories about the impact of smoking are effective in reaching smokers.

David Hammond, a professor in the school of public health at the University of Waterloo, described cigarette packages as "little travelling billboards" circulating in several million pockets across the country.

"Smokers don't really like the cute, rhyming taglines and I think part of it is they recognize this isn't a jingle for a product you buy from the store," he said. "This is a serious issue about their health and that's why they tend to gravitate toward the straightforward, less jingly type of information."

Tobacco companies have brought legal challenges against many countries, including Canada, over health warnings in an attempt to argue they're "anti-smoker," said Hammond, who's been hired by the Canadian government to appear as an expert witness in a court case about packaging slogans.

"I think different warnings will connect to different groups."