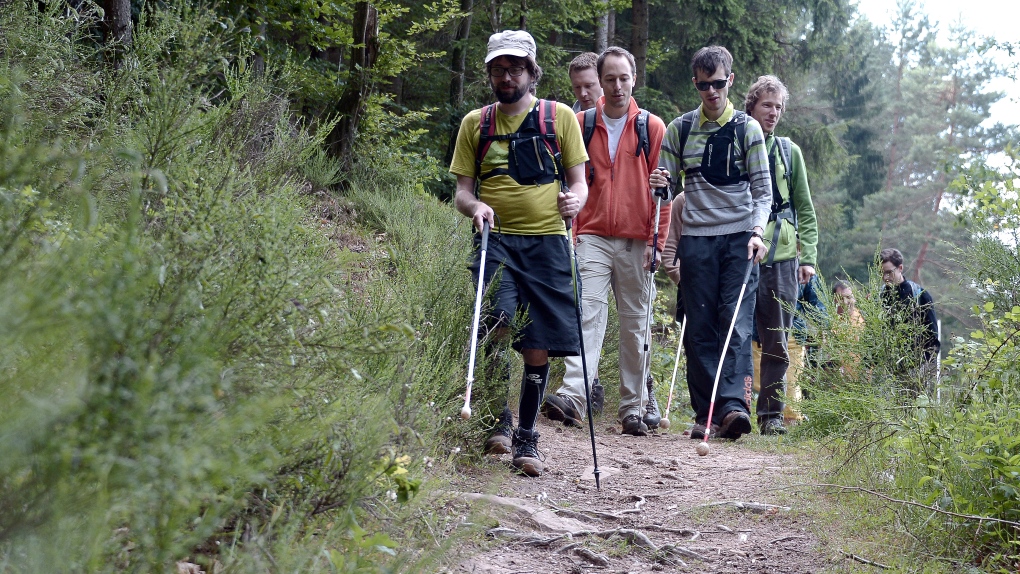 Persons with visual impairment take part in a hike with a white cane and a GPS device using voice navigation in Reipertswiller. (Frederick Florin / AFP)

(Reipertswiller, France) - Five hikers, all blind or partially-sighted, crossed a mountain range in eastern France last week thanks to an innovative GPS system that developers hope can help millions of people with vision problems.

Armed only with their white canes and the experimental smartphone app -- unaccompanied by sighted guides -- the group trekked 80 kilometres in six days through fields and forests in the Vosges range near the German border.

Worn in a small pouch over the stomach, the Navi'Rando -- named for "randonner", the French word for hiking -- warned of bends in the path and turning points at regular intervals.

Developed by a team at Strasbourg University in northeast France, it is part of a growing trend tapping the power of technology to improve life for the visually impaired.

Volunteers from the French Hiking Federation programmed a precise itinerary for the group beforehand, taking care to note any obstacles on the path.

"The thing that's still difficult is using the cane to locate the exact direction of the trail," said Jean-Claude Heim, who has been blind since birth.

"You really have to concentrate," smiled the 63-year-old former teacher, a regular hiker though the Vosges was his first trail without a sighted partner. But that didn't stop him enjoying "everything the countryside has to offer: the smells, the sensation of touch, the rain, the sound of the birds."

For Nicolas Linder, 30, the advantage of the device was its boost to self-confidence and autonomy.

"It's fantastic to rediscover your sense of freedom," he said as he swept the path with his white cane. Among visually handicapped people, "95 per cent of them have problems leaving home" without assistance, he said.

For Navi'Rando's developers, the Vosges mountain crossing was a major test.

Though not the first researchers to use GPS systems to help the blind, the Strasbourg system "is the first to use inertial measurement units (IMUs) to refine the GPS signal and regularly recalculate the itinerary," said team member Laurence Rasseneur of the university's sports science department.

An IMU is an electronic device with gyroscope, barometer and accelerometer functions to aid navigation. It's used to help guide aircraft, including the unmanned variety.

"The next step is to make sure this system will work anywhere, even in places where it can't pick up a GPS signal," said Jesus Zegarra, an electronics engineer who has worked on the project for five years.

Once perfected, "you could even imagine blind people being able to make their way through the corridors of an underground station on their own," said Zegarra.

The Strasbourg device already works in the streets.

"With this, I can allow myself to concentrate a bit less -- I don't have to count my steps to know when exactly to change direction," said Clement Gass, who is partially-sighted and walks to work on his own every day in Strasbourg.

On June 13, the sporty 27-year-old used the Navi'Rando to achieve a world first: running a 26-kilometre trail along with more than 200 sighted participants.

"We hope this technology will help change people's perceptions about the handicap and improve employment opportunities for the visually impaired," she said.

The project is still at the experimental stage but its developers hope to train and equip greater numbers of blind and partially sighted people with the device, both in France and other countries.

At this stage, "the challenge is not technological, it's human," said Rasseneur. "It's a cultural revolution so we need pioneers to show that it's possible."