'Giving these women their lives back': Canadian starts fund to help those struggling with endometriosis get care abroad 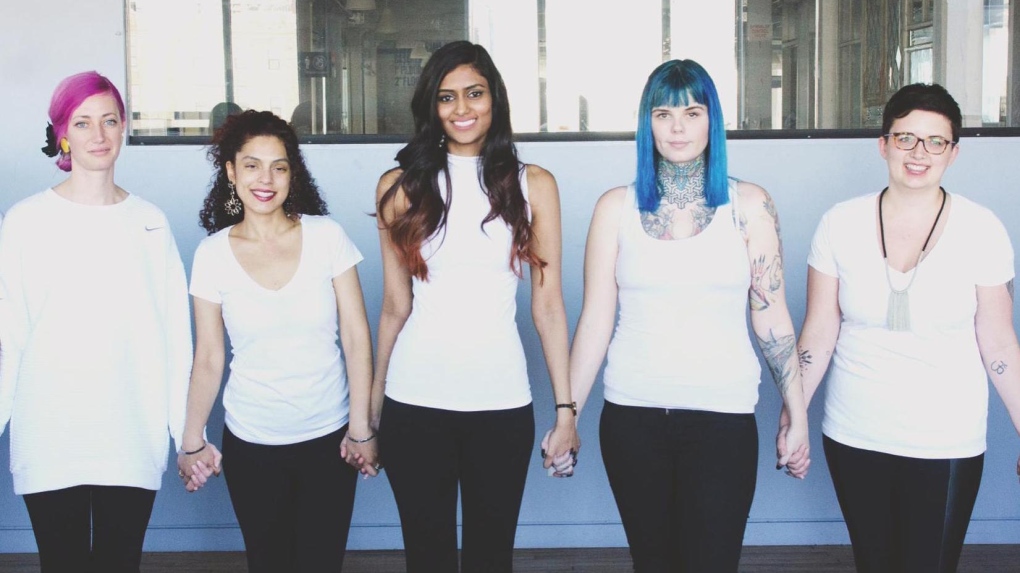 TORONTO -- An Ontario woman, who recently travelled to the U.K. for endometriosis surgery after Canadian doctors dismissed her condition for years, has started a fund to help others in similar situations seek care abroad.

Christina Paruag travelled to the U.K. in October 2020 for surgery after struggling for years to get appropriate care for her condition from doctors and specialists in Canada. Now, she has started a campaign to help other women with endometriosis afford out-of-country surgery.

"Endometriosis takes so much from you, but now that I'm better, I just want to give back to those who face this daily," Paruag said in a telephone interview with CTVNews.ca on Tuesday.

Endometriosis occurs when tissue similar to that lining the uterus grows outside of the uterus in the pelvic cavity to form lesions, cysts, nodules and growths on other organs in the body. The condition can be so severe in some that they are unable to do daily tasks without help.

"Being able to give someone a huge portion of their life back through the ability to participate in regular activities, attend work or school, show up fully in their relationships, start their own businesses and just follow their dreams is what really pushes me to raise this awareness," Paruag said.

The initiative, called the Out of Country Endometriosis Excision Surgery Fund (OOC Excision Fund), aims to provide $20,000 to five recipients that can be used towards an endometriosis surgery with an excision specialist anywhere in the world.

Paruag says the funding is to be put towards endometriosis surgery that is unavailable or has a years-long wait list where the applicant lives. However, if the surgery costs less than $20,000, she says the funds can also be put towards travel costs, accommodations and any debt the person may have accumulated because of the disease.

"A lot of people that go through endometriosis, they have issues with attending work, they're not eligible for EI in many cases, and they end up racking up a lot of debt while also relying on their family and friends for help," Paruag said.

"The financial strain is huge and I've been there so I just want to enable someone to get out of that situation through this surgery," she added.

Funds for the program will be raised through a GoFundMe campaign.

Paruag says those who donate will also receive updates through GoFundMe and will be able to read the before-and-after testimonials from the recipients so they can "see exactly where the funds are going and how an individual has improved."

Paruag said anyone with diagnosed or suspected endometriosis can apply to the OOC Excision Fund. She says those who are looking into out-of-province or out-of-state surgeries can also apply, however, priority will be given to those seeking care abroad and those struggling financially.

Those looking to apply have until March 15 to do so. Paruag said applicants can submit either a written statement or a video explaining what they've been through and how the fund could help their quality of life.

"This is for people who, very much like myself, are missing school and work due to endometriosis, are struggling to care for themselves, to cook, clean, drive and just live a normal life," Paruag explained.

Paruag has enlisted five endometriosis specialists from around the world to help review applications and says recipients will be chosen "based on the severity of their illness and their need for care." Chosen applicants will be notified the first week of April, according to the fund's site.

THE STRUGGLE TO GET TREATMENT

Paruag said she was inspired to launch the OOC Excision Fund after receiving an outpouring of support by sharing her story of struggling with endometriosis.

Paruag, who was diagnosed with endometriosis in 2014, previously told CTVNews.ca that she was suffering from regular kidney infections and frequent ruptured ovarian cysts. She also had digestive issues, chronic fatigue, migraines, as well as shortness of breath and chest pain when she was menstruating.

Despite her symptoms, the 25-year-old says various Canadian doctors all made different conclusions about her condition and were adamant that surgery wasn't necessary.

After sharing her story, Paruag said she received "thousands of messages" from others who faced similar diagnosis and treatment issues in Canada. She says a lot of them were interested in travelling out of the country for surgery, but couldn’t financially afford it.

Paruag said she was denied coverage from the Ontario Health Insurance Plan (OHIP) for her U.K. surgery. The surgery cost her approximately $30,000, and she got a portion of it covered through her own GoFundMe campaign.

"So many people coming together to support me really showed me the power of numbers and I thought to myself, 'I just want to pay it forward'. I hope that giving these women their lives back will enable them to also go out and share their stories openly and be able to create their own platforms," Paruag said.

Dr. Gabriel Mitroi, a gynaecological oncologist and laparoscopic surgeon in Romania who is helping review applicants for the fund, told CTVNews.ca that endometriosis is "not a disease diagnosed and treated easily."

"Endometriosis is not a disease of the reproductive organs, is a whole-body disease and it should be treated as such. All over the world endometriosis is either misdiagnosed or diagnosed late and patients are told that their symptoms are not real," Mitroi said in an email on Tuesday.

While Mitroi admits it will be difficult to select just five applicants for the fund, he anticipates that the campaign will raise enough awareness to help others get the care they need.

"I hope that it will encourage those struggling with endometriosis… to find a specialist in excision that can help them. And, hopefully, will reassure them that their symptoms are real and that period pain is not normal," Mitroi said.

Mitroi, who has performed surgery on patients from all over Europe and Canada, says travelling abroad for endometriosis care is common.

He explained that some patients have to travel out of country for surgery as there may be a lack of endometriosis specialists in their area, they’ve failed all other treatment options, and surgery in their area may take years of waiting.

But Mitroi noted that not everyone can afford the costs of getting surgery abroad.

"If we combine private costs with financial difficulties faced by quite a lot of endometriosis patients, that leaves a lot of them unable to get the treatment they need in order to be able to have a normal life," Mitroi said.

Kroft told CTVNews.ca on Tuesday that surgery is not a cure for the disease and some patients can be treated with oral medication or injections.

"Because there's no cure, it's not like we can operate, remove all of it, and then it's gone. There's about a 50 per cent risk of pain recurrence within five years after surgery," Kroft said in a telephone interview. "It's chronic and it can come back, so because of that we really advocate to try medical therapy for as long as possible to alleviate the symptoms and to ideally hopefully decrease the chance of recurrence."

Kroft, who is not affiliated with Paruag's fund, said she does not think it is safe for Canadians to travel abroad for endometriosis surgery amid the COVID-19 pandemic.

"There certainly are a number of surgeons, gynecologists in Canada who specialized in endometriosis and who have advanced, minimally invasive, surgical treatment training in endometriosis within the country," she said.

However, Kroft acknowledged that there are "long wait times in certain cases" to see some of these specialists and noted that the strain of COVID-19 on the health-care system has only exacerbated the situation.

While travelling abroad may seem like a quick-fix option, Kroft says patients need to be wary of the potentially high costs before hopping on a plane.

"It's very, very, very hard to get reimbursed for endometriosis surgery since it's a covered operation [in Canada]. The only thing that the government will cover internationally is if you're obtaining a procedure that is not performed within this country," she said.

Kroft said another issue with getting surgery abroad is follow-up patient care once they return to Canada.

"Some surgeons don't want to deal with or treat a patient's post-operative complications if they've been caused by another surgeon abroad, because you may not have the records or know what's happened in the case and it can be difficult," she said.

However, Kroft said she understands that waiting to see a specialist can be frustrating as endometriosis patients are usually in "considerable pain."

"[Endometriosis] sometimes takes a backseat towards things like cancer, heart disease, those types of more life threatening conditions so when it's a quality of life condition it can be hard to get patients in as quickly," Kroft said.

"Certainly if there are patients that have organs at risk or more complex issues, then we try to do the best that we can advocate and prioritize those patients higher up on the surgical list," she added.

Since undergoing surgery in the U.K., Paruag said she has seen "such a big change" in her symptoms.

"My nausea, my migraines, which were pretty much like a common occurrence for me, those are gone. My daily pain has disappeared… I haven't had any more kidney infections and before I was getting them almost every month. My periods overall are less debilitating," Paruag explained.

Paruag said doctors in the U.K. were able to remove the majority of the endometrium-like tissue affecting her ovaries, ureter, kidneys and bowels.

However, during surgery, doctors learned that Paruag’s condition had progressed to Stage 4 endometriosis and had spread to her diaphragm, causing the shortness of breath and chest pain she experienced when menstruating.

Paruag said she has been able to get an appointment with a thoracic surgeon in Toronto as she will need another surgery to remove the endometrium-like tissue from her lungs. Paruag said she is waiting to get a CT scan and hopes she will be able to have the surgery done within the next year.

Now that her endometriosis is manageable, Paruag said she is working on relaunching her wellness platform, FemEvolve, with a portion of her profits going towards the OOC Excision Fund. She said she hopes to offer the fund on a yearly basis and eventually have it registered as a non-profit or charity.

Paruag said she is also interested in expanding the initiative to include other health conditions in the future.

Paruag has dedicated the OOC Excision Fund to her aunt, Bibi Pamela Deen Manbodh, who she says passed away in her early 50s from pancreatic cancer three weeks after being diagnosed. Paruag said doctors had continuously dismissed her aunt’s symptoms and misdiagnosed her with a benign tumor.

"There are so many health conditions out there aside from endometriosis that just aren't getting the proper care or the wait times are kind of ridiculous here in Canada, so if I could give someone that power back in their hands I think that would be really incredible," Paruag said.