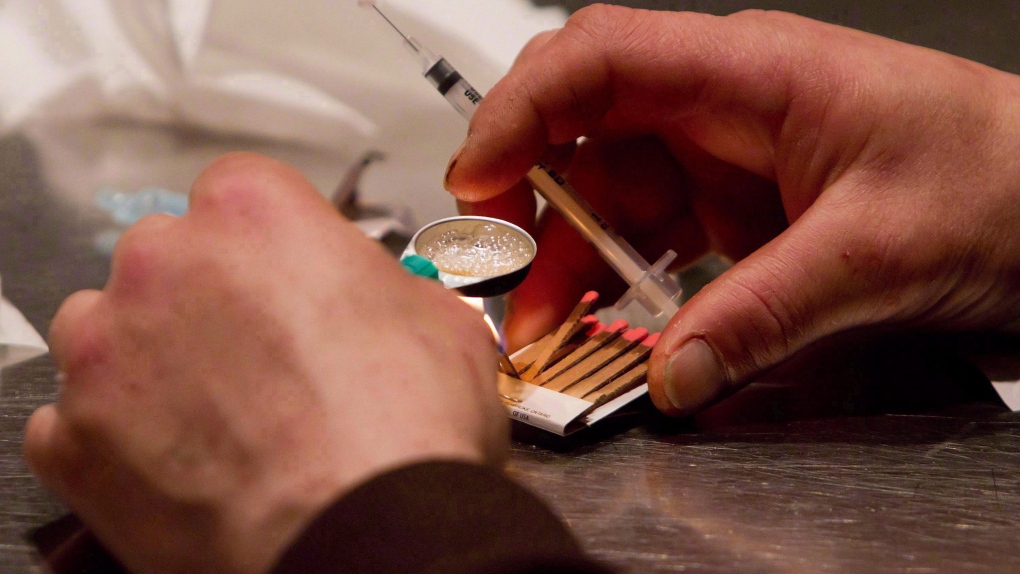 A man prepares heroin he bought on the street to be injected at the Insite safe injection clinic in Vancouver on May 11, 2011. THE CANADIAN PRESS/Darryl Dyck

VANCOUVER -- A national research group recommends health-care providers offer injectable medical-grade heroin or another prescription drug to severely addicted patients if treatment with oral medication has not worked to reduce cravings for people who could die from toxic street drugs.

Dr. Nadia Fairbairn, an addiction specialist at St. Paul's Hospital, said a guideline published Monday in the Canadian Medical Association Journal outlines best practices for innovative treatment that has been lacking during an overdose crisis that claimed 4,460 lives in Canada last year.

"I think we really are going to need to think about how history's going to look back on this era where we're losing so many Canadians to a totally preventable cause like opioid fatalities," said Fairbairn, the lead investigator for the Canadian Research Initiative on Substance Misuse, a research consortium.

Key recommendations in the guideline include the use of the injectable opioids diacetylmorphine, or pharmaceutical-grade heroin, and hydromorphone for patients who shoot up illicit opioids and have not responded to the most effective oral treatments -- methadone and buprenorphine.

The Crosstown Clinic in Vancouver is the only facility in North America that provides diacetylmorphine, which is imported from Switzerland, as well as hydromorphone, another safer substitute for heroin recommended by the initiative, which consists of 32 members including Canadian health-care practitioners, opioid users and their families.

The Vancouver-based Study to Assess Longer-term Opioid Medication Effectiveness, published in 2016 in the Journal of the American Medical Association Psychiatry, found injectable hydromorphone and diacetylmorphine are equally effective at treating severely addicted heroin users who don't respond to oral therapy. It included 202 patients.

An earlier study, the North American Opiate Mediation Initiative, which took place in Vancouver and Montreal between 2005 and 2008, suggested diacetylmorphine is an effective treatment for chronic heroin users when methadone does not work.

The recommendations are a blueprint for health-care practitioners on screening patients who would benefit from injecting the two injectable opioids under medical supervision, said Fairbairn, who is also a research scientist at the BC Centre on Substance Use.

Hydromorphone is also provided at a limited number of other clinics in British Columbia, some of which provide pills that users crush before injecting.

Dr. Scott MacDonald, the lead physician at the Crosstown Clinic, said the heroin substitute is available at about 10 clinics across Canada for chronic injection-drug users.

He said 125 patients are currently registered to inject diacetylmorphine at Crosstown, and 25 people are given hydromorphone.

The rigorous program requires patients to inject at the facility under medical supervision three times a day at an annual taxpayer-funded cost of about $27,000 per patient, MacDonald said.

Overall societal costs would be higher if chronic drug users continued committing crimes to get their fix, raising policing levels and using health-care resources from overdosing or getting infections from used needles, he said.

"If we're able to show that a new treatment is both more effective and more cost-effective it should be expanded. That should be an easy decision for health-care decision-makers, just looking solely at the evidence."

MacDonald said diacetylmorphine should be domestically produced to reduce reliance on Switzerland's supply and he believes that could happen sometime next year.

"The bulk of the raw materials for methadone and diacetylmorphine is currently produced in the United Kingdom. It's just an agricultural product and there's no reason why it shouldn't be produced on an agricultural scale in Canada," he said.

Health Canada said drug manufacturers that wish to market a drug are required to file a submission for the department's scientific review and approval.

"Health Canada has had discussions with companies expressing a possible interest in seeking market authorization for diacetylmorphine in Canada but to date, no submission has been received for review," it said in a statement.

Along with its recommendations, the research initiative published an operational guideline on how health-care practitioners could set up clinics to provide the injectable therapy that is most prevalent in British Columbia.

Online training is currently provided in the province through the BC Centre on Substance Use and is available to physicians across the country.

The centre says that while Health Canada permits both doctors and nurse practitioners to prescribe the recommended injectable opioids, training requirements are determined by each province.

"Aspiring prescribers are therefore advised to work with local health authorities," the centre said in a statement.