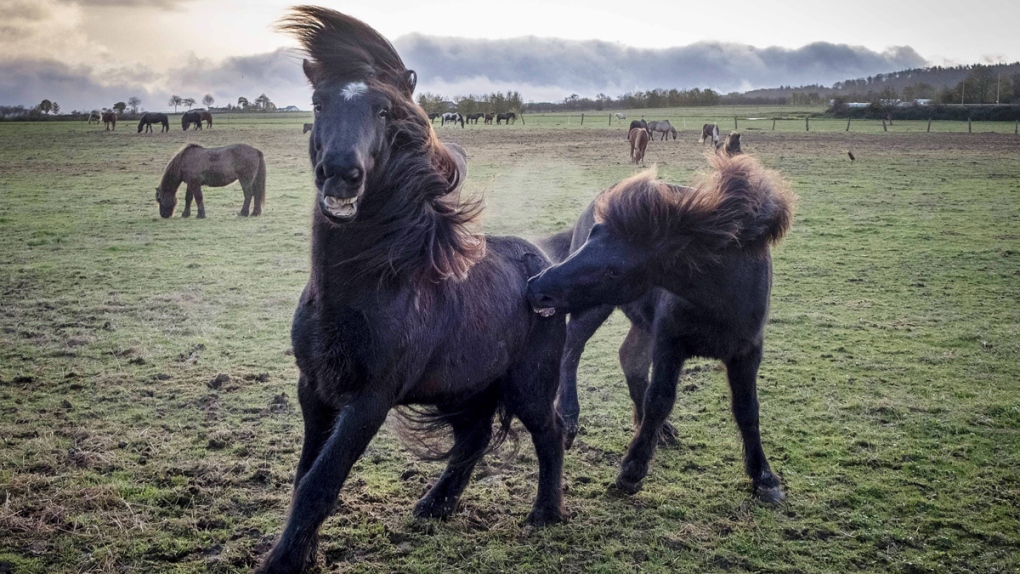 Horses play in their paddock of a stud in Wehrheim near Frankfurt, Germany, on Nov. 5, 2019. (Michael Probst / AP)

BERLIN -- A review of fatal encephalitis cases in the southern German state of Bavaria has found that more than twice as many as previously known were tied to a rare animal-borne virus, researchers said Wednesday.

The Federal Research Institute for Animal Health said scientists examined brain samples from 56 people who died in Bavaria between 1999 and 2019. They found evidence of Borna disease virus in eight samples. Along with six previously known cases since the mid-1990s, this brings to 14 the number of encephalitis deaths in Bavaria linked to the Borna virus over that period.

The study published in the latest issue of medical journal The Lancet Infectious Diseases was conducted together with researchers from four German universities and Germany's Bernhard Nocht Institute for Tropical Medicine.

Borna disease virus 1, or BoDV-1, is normally found in horses, sheep and other mammals. It was first identified as the cause of severe human encephalitis in 2018.

The virus is harboured by the bicolored white-toothed shrew and researchers suspect that infections are caused by contact with the animal's excrement. While natural human-to-human transmission has been ruled out, some cases resulted from organ transplants.

Symptoms of encephalitis include fever, severe headaches, speech and gait disorders that can lead to coma within days or a few weeks.

The researchers noted that while BoDV-1 has a very high death rate, "the absolute number of infections and hence the risk of infection is estimated to be very low."

They said the main risk areas in Germany are the states of Bavaria, Thuringia, Saxony-Anhalt and parts of neighbouring adjoining states.

Germany will require compulsory notification of BoDV-1 infections from March.