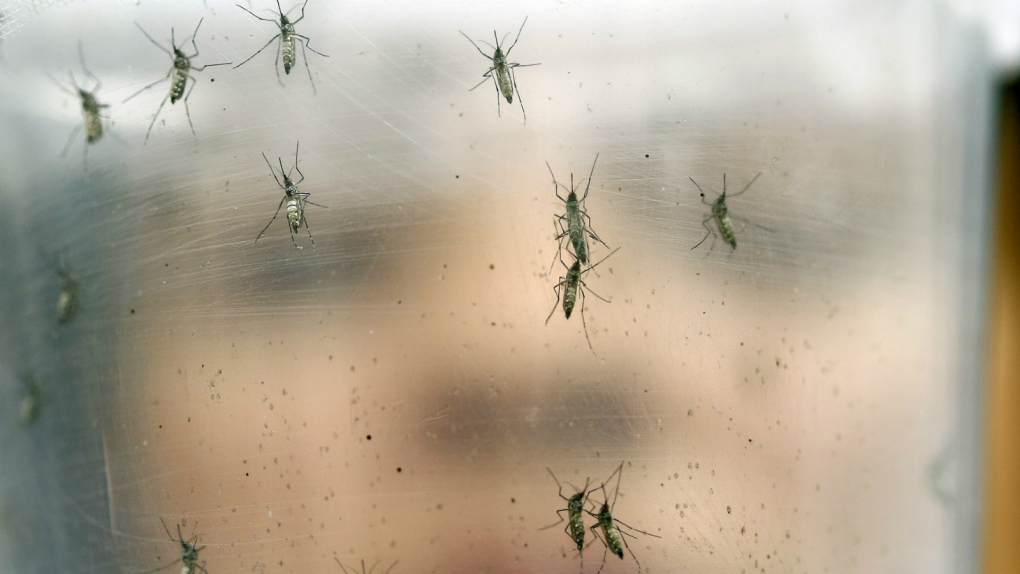 A researcher holds a container with female Aedes aegypti mosquitoes at the Biomedical Sciences Institute in the Sao Paulo's University in Sao Paulo, Brazil on Jan. 18, 2016. (AP / Andre Penner)

MIAMI -- A field trial releasing genetically modified mosquitoes in Florida would not harm humans or the environment, according to documents released Friday by the U.S. Food and Drug Administration.

The agency's Center for Veterinary Medicine released a preliminary finding of no significant impact for the trial of a method that aims to reduce populations of the mosquito that spreads dengue, chikungunya and the Zika virus among humans.

The trial is proposed by the British biotech firm Oxitec. The Florida Keys Mosquito Control District wants to test Oxitec's mosquitoes in a neighbourhood north of Key West.

The FDA still needs to review public comments on Oxitec's proposal before deciding whether to approve that trial.

Oxitec modifies Aedes aegypti mosquitoes with synthetic DNA to produce offspring that won't survive outside a lab. Oxitec has conducted similar tests in Panama, Brazil and the Cayman Islands.

A residents' group called the Florida Keys Environmental Coalition wants the district to instead try infecting mosquitoes with a bacteria that curbs their ability to transmit disease, arguing that Oxitec's proposal is mostly marketing hype and won't be subject to adequate federal oversight.

In an email this week to The Associated Press, the coalition's executive director, Barry Wray, questioned the ongoing costs Oxitec's method might incur.

District executive director Michael Doyle said the district is looking at several different technologies for eradicating Aedes mosquitoes, but those other methods take years to develop and Oxitec is furthest along.

Anti-GMO activists have criticized Oxitec's trials, saying more proof is needed that stray female modified mosquitoes that leave the labs aren't spreading genetic material through bites or that there are no other environmental risks, such as opening areas to infestation by another disease-carrying mosquito species.

Modified females are manually separated in Oxitec labs from the modified males, which do not bite and are released to mate with wild female mosquitoes.

In its preliminary finding, the FDA said it was "highly unlikely" that humans or animals bitten by female modified mosquitoes would be exposed to synthetic genetic material, and any bites wouldn't be any different from bites made by a wild mosquito.

It's also unlikely that suppressing the local Aedes population during the trial would open the area to an infestation of another disease-carrying species during that period, the FDA said.

The FDA also found no significant risks that the modified mosquitoes would disperse well beyond the trial area, develop resistance to insecticides or persist in the environment.

The Centers for Disease Control and Prevention and the Environmental Protection Agency also have reviewed the proposal along with the FDA.