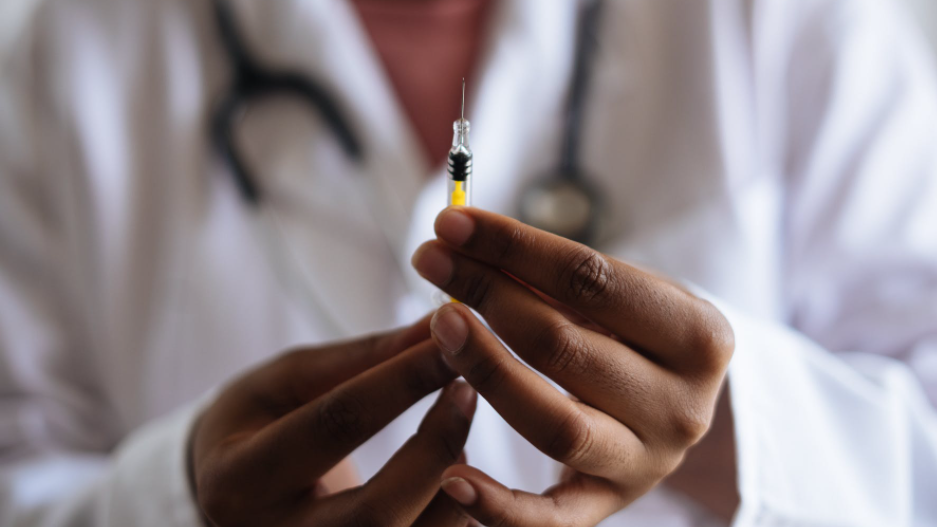 A syringe is shown in this stock image. (Pexels)

TORONTO -- In an example of a growing trend of using off-label medications to protect their sexual health, some gay and bisexual men in Canada claim that taking a meningitis vaccine can prevent gonorrhea, but doctors caution the research is still in its infancy.

The vaccine, called Bexsero, was approved by Health Canada in 2013 for protection against meningitis B, which can cause serious, life-threatening infections such as meningitis (infection in the lining of the brain and spinal cord) and sepsis (blood poisoning).

More recently, gay, bisexual and other men who have sex with men (gbMSM) have been taking the vaccine to prevent gonorrhea after a study in New Zealand in 2017 incidentally found it lowered the risk of the STI by more than 30 per cent.

Dr. Troy Grennan, the physician lead for the HIV/STI program at the BC Centre for Disease Control, explained that the reason Bexsero is thought to work in the prevention of gonorrhea as well as meningococcal disease is because both diseases are caused by related bacterium.

Meningococcal disease is caused by a bacterium called Neisseria meningitides while gonorrhea is caused by Neisseria gonorrhoeae – both of which are part of the Neisseriaceae bacteria family.

“The thought is that the meningitis vaccine actually targets an area where there’s overlap between the two organisms,” he told CTVNews.ca during a telephone interview from Vancouver last week.

While Grennan said research specifically looking into the effect of Bexsero on rates of gonorrhea is still in its early days – there are now a couple of ongoing studies, including a large one in Alabama – members of the gbMSM community have already started seeking out the vaccine.

John, who requested that his full name not be published, is one of those early adopters of the Bexsero vaccine for the prevention of gonorrhea. He said he received his first dose of the two-dose vaccine in the fall of 2019 after his physician told him about some of the studies on it.

After doing some of his own research, John said he didn’t have any concerns about taking the vaccine for the prevention of gonorrhea instead of its indicated use.

“I thought it was a pretty straightforward vaccine to help meningitis. The bacteria itself is sort of related,” he said during a telephone interview from his home in Vancouver last week.

So far, John said he hasn’t experienced any side effects or adverse reactions to the vaccine.

“I guess it’s worked because no real infection,” he said.

In an emailed statement to CTVNews.ca on Friday, a spokesperson for GlaxoSmithKline, which manufacturers Bexsero, said the vaccine was approved in Canada for use in individuals who are two months to 25 years of age for the prevention of meningococcal disease caused by Neisseria meningitidis group B bacteria.

“BEXSERO is not indicated for the prevention of gonorrhea and GSK does not support the off label use of our products,” the statement read.

The spokesperson added that there are completed and ongoing studies related to the use of Bexsero against gonorrhea and information about them can be found on clinicaltrials.gov.

Because research on the use of Bexsero to prevent gonorrhea specifically is still in its early stages, Grennan said patients should speak to their health-care provider about what options are available to them to protect their sexual health.

“It’s looking very promising,” he said. “It’s great that these studies are happening, but I think the full results just aren’t in yet.”

Although the use of the Bexsero vaccine to prevent gonorrhea is relatively new, it’s hardly the first time gay, bisexual, and transgender men in Canada have resorted to off-label medications to protect their sexual health.

Jody Jollimore, an advocate for gay men’s health and the executive director of the Community-Based Research Centre in Vancouver, said the interest in the Bexsero vaccine is part of a growing trend in the gay and queer community to find their own health solutions.

“It really speaks to the resolve, and the determination to prevent STIs and prevent HIV and really have better sexual health as a community,” he told CTVNews.ca during a telephone interview from Halifax last week.

Jollimore, who intends to get the Bexsero shot himself soon after finding out about it from his friend John, said gay and queer men have had a long history of activism and engagement around prevention.

As examples, Jollimore said that gay men promoted the use of condoms and pre-exposure prophylaxis (or PrEP) medication to prevent HIV before the government and health officials did. He also said that gay men were the ones who first discovered that Hepatitis C could be sexually transmitted.

“Because of HIV, it’s made gay men acutely sexual-health aware, and therefore we see these pockets of knowledge that happen, and we continue to lead the way in prevention,” he said.

Grennan agreed that, in general, the gbMSM population is very health literate and proactive in seeking out ways to improve their sexual health, which explains their interest in Bexsero and other off-label medications, such as doxycycline.

Doxycycline is a common antibiotic that has been in use since the 1960s and is used to prevent a large number of bacterial infections, including acne, respiratory infections, eye infections, intestinal infections, and bone infections to name a few. Some forms of the medication are also used to treat malaria.

Grennan explained that, over the past decade, a couple of studies have been released that show that doxycycline can also prevent syphilis and chlamydia. Grennan, himself, is conducting a trial involving 500 gbMSM from across Canada to study the antibiotic’s effect on STIs.

Both Jollimore and John said they have been taking doxycycline for the prevention of STIs for several years now.

The importance of finding new prevention methods is more important than ever, according to Grennan as incidence of STIs, particularly syphilis and particularly in gbMSM, “skyrocket” across the country. He said gonorrhea rates have also continued to rise, despite their best efforts.

“It's great that we're finally starting to explore novel approaches to STI prevention because I think this work has been marred or kind of delayed or impacted negatively by a lot of the societal stigma and sex negativity that’s been out there,” he said.

Jollimore added that this type of research can benefit everyone and not just those in the gbMSM community.

“While we might be leading the way as queer men, these might be interventions that would be effective for other populations,” he said.

That’s why Jollimore and others are trying to bring attention to the use of off-label medications for sexual health to encourage more research on their potential benefits.