French president wants to legalize sedation of the terminally ill 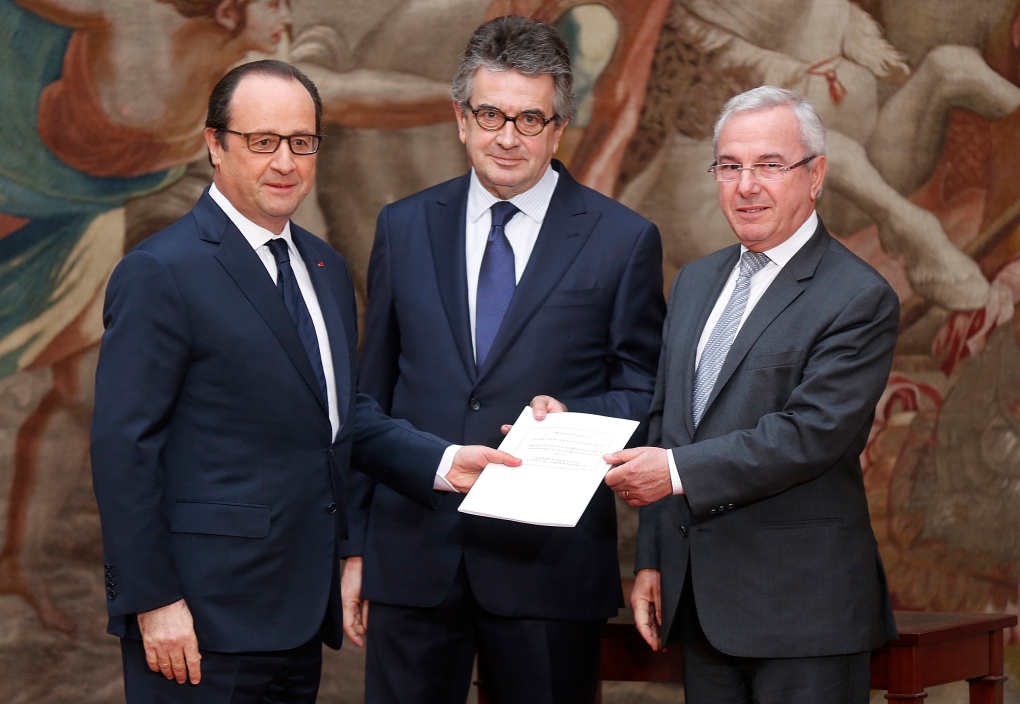 French President Francois Hollande, left, stands with French deputies Alain Clayes, centre, and Jean Leonetti as they pose with the report for the reform of end-of-life treatment at the Elysee Palace in Paris, France, Dec. 12, 2014. (AP Photo/Jacky Naegelin, Pool)

PARIS -- France's president wants to allow doctors to keep terminally ill patients sedated until death comes, amid a national debate about whether to legalize euthanasia.

Instead, he called Friday for a law that would give people "the right to deep, continuous sedation until death" -- at patients' request, and only when their condition is life-threatening in the short term.

Doctors are divided about the idea. Hollande did not outline details of his proposal, but so-called terminal or palliative sedation can involve medicating patients until they die naturally of their illnesses, or until they starve.

The method doesn't actively kill patients. But some doctors say it can mean patients are sedated for weeks before they die, and that it may be more humane to euthanize.

The French proposal does not involve assisted suicide, in which doctors generally prescribe lethal medication that the patient administers.

French debate over end-of-life legislation resurfaced this year over the case of comatose Frenchman Vincent Lambert. His wife wants doctors to stop life support but his parents disagree. The case is pending at the European Court of Human Rights.

Hollande also wants the new French law to force doctors to follow end-of-life instructions written in advance, if patients are no longer able to express their will.

It is to be debated early next year in Parliament, where Hollande's Socialist Party has a majority.

Jean Leonetti, the French politician whose name is on 2005 legislation on the right to die in France, said the new bill is aimed at meeting "strong demand" for pain relief in terminal stages of illness.

According to several recent polls, a large majority of French people are in favour of euthanasia under certain conditions.

Euthanasia is currently legal in the Netherlands, Belgium and Luxembourg.