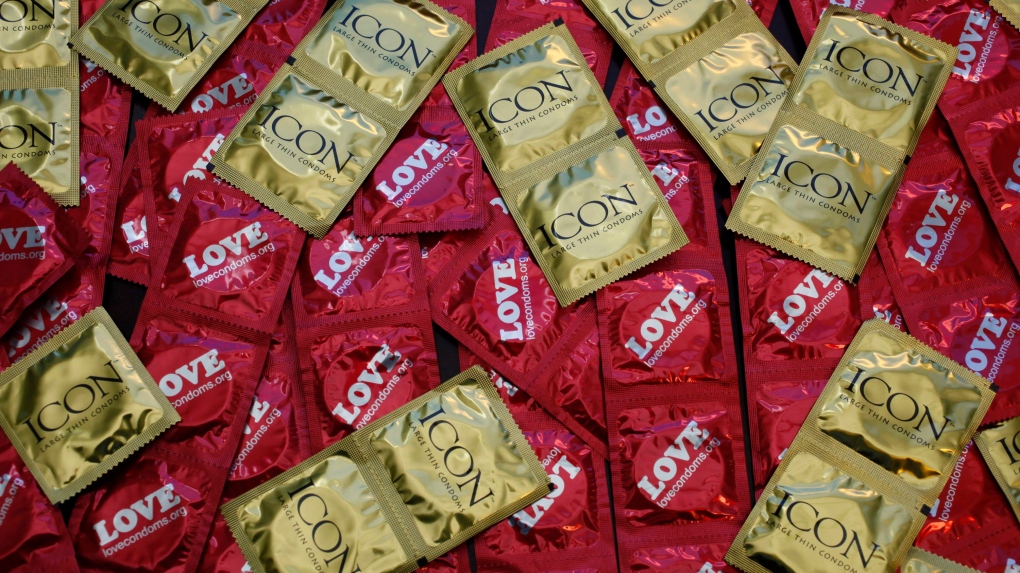 This Feb. 14, 2013 file photo, a sample of condoms is displayed at a news conference in Los Angeles. (AP Photo/Damian Dovarganes, File)

The French government said Tuesday it would take the rare step of reimbursing prescription-bought condoms to combat the spread of HIV and other sexually transmitted diseases.

The measure, which covers French-made Eden condoms obtained on prescription from a doctor or midwife, was announced ahead of World AIDS Day on Saturday.

Produced by Majorelle laboratories and sold only in pharmacies, Eden condoms cost a fraction of leading brands such as Durex or Manix at 2.60 euros (US$2.95) for a box of 12.

They are the first to be approved for reimbursement by France's national health authority, one of the few in Europe to do so.

In a statement the company hailed the announcement as "sending a strong signal that it (a condom) is not a sex toy but a real and indispensable prevention tool" in the fight against sexually transmitted infections.

In July, a health department study showed cases of chlamydia and gonococcus -- two common STIs -- tripling in France between 2012 and 2016, with 15-24 year-olds particularly affected.

The study indicated the rise was due to people having sex with "an increasing number of partners coupled with the non-systematic use of condoms".

Asked why its brand was selected, a spokeswoman for Majorelle, which was founded in 2012 with the stated aim of reducing inequality in access to health products, said: "We were the first to ask".

Agnes Buzyn, the health minister who is a trained doctor, sounded the alarm over the risk of HIV transmission among condom-averse young people.

Buzyn warned that young people increasingly "use a condom the first time they have sex but not in subsequent instances."

Majorelle cited a study showing that 75 percent of young people would use condoms more if the cost was covered by the state.

It said that the state would cover 60 percent of the cost of the condoms and hopes that top-up health insurance providers would cover the remainder.

The news was hailed by NGOs involved in the fight against HIV/AIDS.

"Anything that facilitates access to prevention is good news," said Florence Thune, head of the Sidaction association.

"There should be no financial obstacle, whatever the method," she said.

"It's another string to our bow," said Caroline Izambert, a campaigner at Aides HIV prevention group.