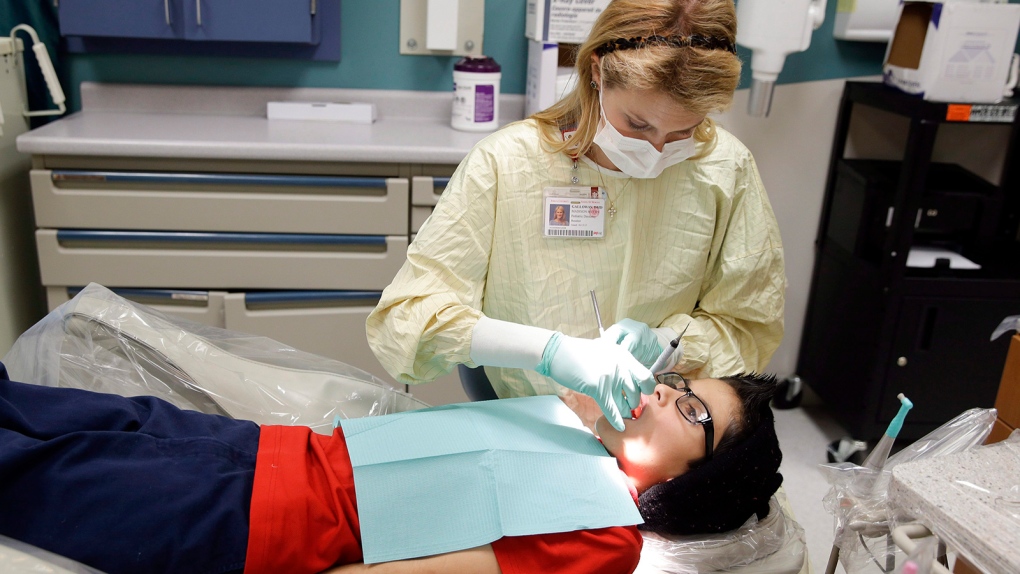 A dental resident checks the teeth of an 11-year-old child, during an office visit at Riley Hospital for Children's Department of Pediatric Dentistry in Indianapolis on Friday, Jan. 22, 2016. (AP / Michael Conroy)

A new study comparing schoolchildren in Alberta found that fluoride cessation in Calgary has had a negative impact on children's dental health, adding to the ongoing debate over fluoridation.

The study, published Wednesday in the journal Community Dentistry and Oral Epidemiology, compared the dental health of Grade 2 children in both Edmonton and Calgary. Calgary discontinued water fluoridation in 2011, but fluoride is still added to the drinking water in Edmonton.

The researchers conducting the study compared data from dental records of more than 5,000 Grade 2 students in both cities from the 2004/2005 and 2013/2014 school years. They looked for an increase in tooth decay on the surfaces of the children's teeth.

The students attended schools in both the public and Catholic school systems.

The researchers found that in primary teeth, commonly known as baby teeth, there was a worsening in tooth decay in Calgary since the city stopped fluoridation in 2011, compared to Edmonton.

"We found that dental cavities, or tooth decay actually got worse in both cities, but it got much more worse in Calgary," the study's lead author Lindsay McLaren, an associate professor with the University of Calgary's department of community health sciences, told CTV Calgary.

"It's a statistically significant finding, so that means it's unlikely to be random or chance, and I think it's meaningful."

Specifically, the number of tooth surfaces with decay per child increased by 3.8 surfaces in Calgary from 2004/2005 to 2013/2014, compared to an increase of 2.1 surfaces per child in Edmonton. This difference was statistically significant, the researchers said.

The average child of this age has about 20 teeth, with four or five surfaces per tooth, the researchers said.

Tooth decay is the most common infectious disease in children. It can result in pain for the child, and require expensive dental treatments, including extractions and fillings. Dental problems are also the leading cause of day surgery for young children in Canada, the researchers say.

McLaren said that the findings suggest that there are public health benefits to fluoridation.

"This study points to the conclusion that tooth decay has worsened following removal of fluoride from drinking water, especially in primary teeth, and it will be important to continue monitoring these trends," she said in a statement.

Steven Patterson, co-author of the study and a professor at the University of Alberta's school of dentistry, echoed this sentiment.

"The early effects of fluoridation cessation found in this study support the role of water fluoridation in contributing to improved oral health of children and that it is a public health measure worth maintaining," he said in a statement.

Calgary dentist Leonard Smith echoed the study's finding, saying he's seen an uptick in cavities in his young patients since 2011.

"We are seeing much more extensive dental decay in a much younger population than we did when fluoride was in our water," Smith told CTV Calgary.

Smith says he recommends parents give their children fluoride drops and toothpaste in the absence of fluoridated water.

But he would prefer if Calgary starts adding fluoride to its water again.

"The fact that our city had chosen to remove fluoride has been one of the most anti-public health measures ever in the city of Calgary," he said.

Alberta's health minister said her office is reviewing the study.

Citing economic and ethical concerns, the city council voted to stop fluoridation in February, 2011. Some who favoured cessation argued that it was not ethical to be forcing "medication" on all of the city’s residents. Others said there was no evidence to justify the practice. However, at the time, the city opted to not consult with an expert panel offered free of charge by the University of Calgary.

At the time, the city's fluoridation system was cost about $1 million a year, but it was in need of a multimillion dollar upgrade.

Calgary Coun. Druh Farrell spearheaded the city's removal of fluoride. She said she was doing what her constituents wanted.

"I was hearing from Calgarians who simply don't want fluoride in the water. Whether it was a realized fear or an unrealized fear – they just don't want to ingest it," she said.

Removing fluoride from drinking water is a debate facing many communities in North America and around the world. Since 2005, more than 30 communities have decided to discontinue the practice, the study said.

The study also found that there was a general increase in tooth decay apparent in both Calgary and Edmonton between 2004/2005 and 2013/2014, although the magnitude of the increase was greater in Calgary.

The researchers said several different factors could be behind this rise in tooth decay in both cities, including: the impact of the global economic recession of 2008; shifting economic conditions in Alberta (which is primarily based on the oil and gas industry); an increase in the ethnic diversity in both of these cities over time; and an increase in the consumption of bottled water, which is not fluoridated.

However, the reason for the increase in tooth decay in both cities is an "important remaining question," the study said.

With files from CTV Calgary