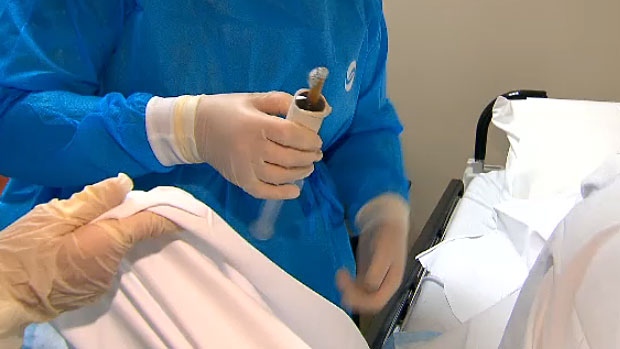 TORONTO -- Stool transplants appear to be a veritable home run in the treatment of recurrent C. difficile infections. Researchers are now questioning whether the therapy would work for a range of other bowel diseases, and even obesity.

The first trials looking at whether ulcerative colitis could be treated with an infusion of a healthy person's stool produced confusing results.

One clinical trial, by Dutch researchers, was ended early when a planned interim analysis concluded that the study was not on track to be able to come up with an answer.

The same happened with a second, by researchers at McMaster University in Hamilton. But the data and safety monitoring board assessing the trial told the McMaster team they should go ahead with a few additional patients who had been enrolled but hadn't yet received the treatment or a placebo.

By the time they were done with the extra patients, the McMaster study took a surprising turn for the better.

The group, led by Dr. Paul Moayyedi, director of the division of gastroenterology at the university's medical school, reported recently that they did see a positive outcome from their trial. Patients with ulcerative colitis who received a stool transplant were statistically more likely to go into remission than patients who received a placebo treatment.

"I would actually call this a positive result, but one with caveats," said Moayyedi, who along with his colleagues published the results in a recent issue of the journal Gastroenterology.

"The caveats are that this trial was stopped early ... (and) the sample size is not large enough to make a definitive conclusion."

Even with a positive result, though, it appears fecal transplants are unlikely to be as effective for colitis as they are for C. difficile.

The journal published both the Dutch and McMaster studies together, along with an editorial that warned fecal transplants for ulcerative colitis aren't yet ready for prime time.

"I am rooting for Moayyedi and his colleagues. I think they did an outstanding job with what they were able to do. And I was very pleased when (the trial) went from a negative to a positive" result, said Dr. Ari Grinspan, one of the authors of the editorial and a gastroenterologist at the Icahn School of Medicine at Mount Sinai Hospital in New York.

The principle behind fecal transplants is that in gastrointestinal diseases, the armies of bacteria in the human GI tract are out of balance. It is thought that the disease can be brought under control by replenishing stocks of good bacteria that keep the bad actors in check.

It certainly works for C. difficile diarrhea. Doctors who use fecal transplants to treat patients with C. difficile infections that cannot be cured by antibiotics report extraordinary success. Grinspan said he has treated about 100 patients this way and has a 95 per cent cure rate.

Given that ulcerative colitis is caused by an inflammation of the lining of the colon -- as is seen in C. diff infections -- it didn't seem to be a stretch that fecal transplants might help here too.

The Dutch group didn't see benefits, though both Moayyedi and Grinspan pointed out problems with their study design.

The Dutch team only gave each patient two transfusions of healthy donor stool and they did it via what people in this field call "the upper route" -- they dripped the liquefied material into the gastric tract through a tube looped through a nostril and down the throat.

Moayyedi said with ulcerative colitis, the disease starts in the rectum. So his group felt it made more sense to use the opposite approach. They transfused the donor stool through a reverse enema procedure, giving each patient repeat transfusions over several weeks.

Their study was set up to allow a data and safety monitoring board to take a look about half way through. If the treatment seemed to be causing harm, the study was to be stopped. The same outcome was to be ordered if the study didn't seem likely to show a statistically significant benefit.

Moayyedi said in retrospect, he and his colleagues probably shouldn't have included that latter provision.

There is no way of knowing what would have happened if the study had enrolled 130 people, as originally planned. With another 50 patients, the finding might have appeared stronger -- or might have turned back the other way.

Grinspan suggested it was a stroke of bad luck.

"I know these guys. I know they did exactly what they needed to do. They followed the rule book. Fantastic. But it still calls into question exactly what we're seeing here."

Grinspan noted that five other studies are underway that will hopefully shed more light on whether fecal transplants will be useful for ulcerative colitis.

Moayyedi insisted the work needs to continue, saying it could eventually lead to a cure for ulcerative colitis.

With C. difficile, the cause of the disease is known. But with ulcerative colitis, it's not clear what induces the body to turn on the lining of the colon. If fecal transplants work for some patients, the next step will be trying to figure out what the treatment is fixing -- and trying to stop that disease process from occurring in the first place.