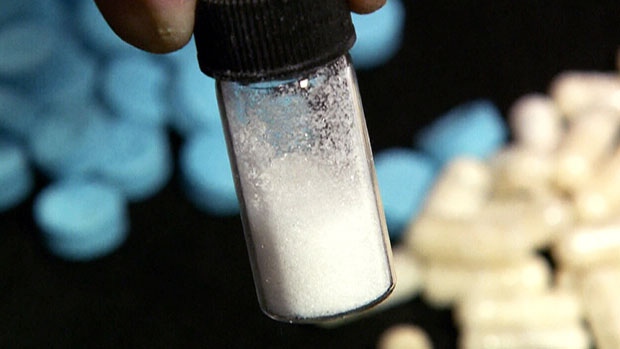 In Silver Heights, police recovered an ounce of pure fentanyl, an ounce of fentanyl cut with icing sugar and 8.3 ounces of marijuana. (File image)

VANCOUVER - Family doctors should be on the front lines of addiction treatment but many are unwilling to learn about substance use even as a national overdose crisis worsens, says the head of medical education at Canada's largest mental health teaching hospital.

Dr. Peter Selby, in the addictions division of the Centre for Addiction and Mental Health, said stigma and discrimination prevent physicians from getting training to treat vulnerable patients who have become addicted to opioids such as heroin or those prescribed for pain relief.

"It comes from this core lack of understanding and training around helping people with addictions as a medical condition," Selby said from Toronto. "It's still seen as something bad that people do."

Selby said it's no longer acceptable for doctors to say they don't know enough about addiction treatment, which he added should be integrated into primary care so patients can be screened and switched to medications, such as methadone and suboxone to reduce withdrawal symptoms.

"You've got a whole core of established physicians in Canada who refuse to accept patients with addiction, will not provide the evidence-based treatments," Selby said. "And that leads to significant consequences, like overdoses and deaths."

Health Canada said 2,816 people died across the country in 2016 of suspected opioid overdoses. Between January and March 2017, the latest figures available, there were 602 fatalities. British Columbia alone recorded 1,208 deaths between January and October this year, up from 683 fatalities during the same period in 2016.

Leslie McBain said her son, Jordan Miller, feared he'd become dependent on oxycodone that was prescribed for a back injury and sought help. McBain accompanied him to see a doctor, who she said unleashed a torrent of anger when the issue of addiction came up.

"The doctor blew up," said McBain, a founding member of a group called Moms Stop the Harm, which supports about 300 families across Canada as they deal with the death of a loved one who has overdosed.

"I've never seen a professional person lose their temper like that. It was ugly. I was just sitting on the sidelines in the office and I thought, 'My son came in here with his courage in his hand to say I need help and the doctor's yelling at him.' "

McBain said she and her husband got their son into detox in British Columbia on their own. But she couldn't find a counsellor, psychiatrist or addictions specialist to help him afterwards as he endured two months of painful withdrawal symptoms.

That's when Miller relapsed and "doctor shopped" at walk-in clinics, she said, getting more prescription drugs to ease the agony. McBain's only child died of an overdose at age 25 in February 2014.

"Very little has changed," McBain said about stigma against substance users. She said progress toward recognizing addiction as a chronic and relapsing condition has been slow among doctors.

However, colleges that regulate the medical profession have created more awareness and offered continuing education for physicians who are interested in learning about addiction, said McBain, who also advocates for families through the B.C. Centre on Substance Use.

Dr. Jeff Sisler, executive director of professional development and practice support at the College of Family Physicians of Canada, said some doctors do shun patients struggling with addiction, which is considered less attractive, complex care.

"But the clinical demands and the societal pressures for doctors to manage this better is being felt," he said.

The college has been focusing on linking doctors with mentorship networks to get the support they need, he said, noting that family physicians in Ontario are connected with specialists online, through texts and via phone calls.

"It's a long-term relationship with regular family doctors and people with more expertise to provide information tailored to the person and also to encourage them, to give them confidence, to address some of the worries that family doctors have about these complex patients," Sisler said.

"We're actually trying right now to get other provinces to offer similar networks."

Dr. Evan Wood, director of the B.C. Centre on Substance Use, said efforts are underway to change the image of addiction medicine from an unattractive discipline to one that's rewarding because patients can dramatically improve their health with treatment.

"We want people to understand that it's one of the most exciting areas in medicine right now," he said. "Colleagues of mine are talking about the development of new medications, new interventions that are coming forward in the substance-use context."

He said 25 doctors applied this year for four fellowship spots in addiction medicine within the Vancouver Coastal Health region and funding is needed to allow more physicians to specialize in the discipline as part of a focused competency so they can lead clinical programs around the province.

The B.C. Centre on Substance Use is also trying to identify medical students early in their careers if they show an interest in working with substance users, Wood said.

"But it doesn't address the fundamental issue that if it takes twice as long and you get paid half as much you're not going to get enough altruistic physicians who are going to take this on."

Wood said doctors may need incentive payments to treat addiction because starting someone on suboxone, for example, can take three hours on the first day. Physicians are already paid extra for methadone treatment as well as other chronic conditions, including diabetes and high blood pressure.

Doctors of BC has proposed higher fees for treatment of opioid use disorder, and the association said in an email that it, along with the Medical Services Commission, which manages the Medical Services Plan for the government, will decide early next year whether physicians can bill for more money.

Family doctors will need to lead the effort to treat addiction with support from specialists, the same as for other health concerns, Wood said.

"That's the opportunity in front of us now, if we go about this in a thoughtful way."