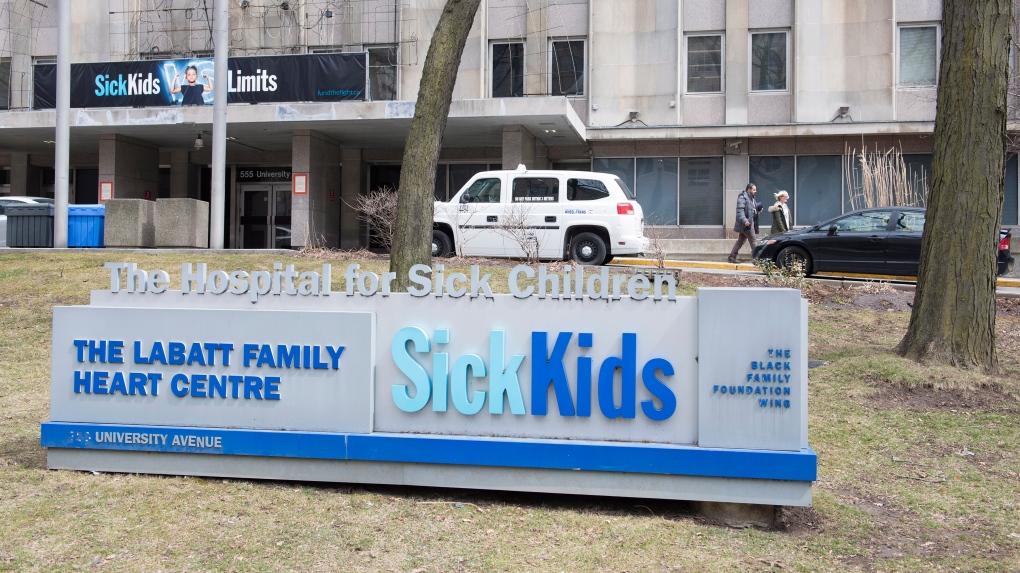 The Hospital for Sick Children in Toronto is shown on Thursday, April 5, 2018. (THE CANADIAN PRESS/Doug Ives)

TORONTO -- Pediatric and mental health experts say pandemic stress is driving a spike in eating disorders among adolescents and teens, pointing to school disruptions, social isolation and infection fears as destabilizing factors that could have long-term physical and mental health effects.

Doctors at Toronto's Hospital for Sick Children, Ottawa's pediatric hospital and research centre CHEO and the Alberta Children's Hospital in Calgary are among those noting a significant jump in admissions and demand for outpatient treatment.

Dr. Ellie Vyver of the Alberta Children's Hospital says admissions more than doubled at her hospital between July and September last year and continue to rise. Colleagues across the country are reporting similar signs of despair.

At the same time, children who struggle are displaying more severe mental and physical problems, adds the director of CHEO's mental health program, who says his eastern Ontario hospital can only treat the "tip of the iceberg."

"The supply and demand is so off-kilter right now that it is overwhelming the system," says David Murphy.

The cutoff for admission to CHEO is a heart rate below 45 beats per minute. CHEO says there were 67 admissions between April 1 and Oct. 31 last year -- a 63 per cent jump from the same period in 2019.

Compared to last year, Bartha says yearly admissions at her Toronto hospital are expected to jump as much as 30 per cent to 170 (from 128), while the number of referred outpatients is heading towards a 50 to 60 per cent increase with 245 cases (versus last year's 154).

The cases primarily involve restrictive eating, including anorexia nervosa and avoidant/restrictive food intake disorder, which is similar to anorexia but does not involve stress over body shape or size.

Dr. Debra Katzman, senior associate scientist at SickKids and co-founder of its eating disorders program, also says children are in more acute physical and mental distress than past cases.

That could be because of delayed assessments if some families feared contracting COVID-19 by visiting a hospital early in the pandemic, she says. Meanwhile, virtual care has made it more difficult for some recovering patients to maintain health goals.

"We're seeing kids who are at significantly low weights, are extremely malnourished and have all kinds of medical and psychiatric comorbid complications," says Katzman.

Although SickKids is still collecting and analyzing its data, she and Bartha expressed little doubt that pandemic-fuelled turmoil has played a key role in driving up youth anxiety.

"These young people are so used to having a routine that they engage in every day -- waking up, going to school, coming home, et cetera -- and now they have no routine. And they're quite disconnected from their peers. That's a huge thing, especially during adolescence," says Katzman.

"(And) they're not with their teachers or their coaches who are able to identify these very life-threatening disorders quite early."

Sterling Renzoni of Orangeville, Ont., believes social media, isolation and disrupted care were key factors in a "mini-relapse" he says he experienced during the lockdown last spring.

The 18-year-old says he was discharged early from a southern Ontario residential treatment program for anorexia in the early days of the pandemic. No longer forced to follow a strict daily routine, under less supervision and unable to see his friends, Renzoni says he began fixating on exercise.

"It was challenging to figure out how I was going to keep myself busy," admits Renzoni, who says he stopped obsessing with the help of virtual care and by redirecting focus to his long-term goal of attending university in the fall.

"I had more time to just be on social media (and) it was still filled with a lot of unhelpful accounts, unhelpful information and unhelpful people that I was following... but I realized that after already having a mini-relapse."

Now a Trent University freshman, Renzoni says if it hadn't been for the pandemic, he likely would have stayed in residential care for three months instead of one, and would have been more physically and mentally able to withstand pandemic restrictions when discharged.

These all make it difficult for anyone struggling with food issues, he said.

"It just makes it a lot harder if food is your primary means of coping and now you're surrounded by it and you're stressed out," says Maharaj.

Maharaj says NEDIC's anonymous helpline has seen a 43 per cent overall increase in calls, and more than double the number of calls from those aged 11 to 19.

The head of the Adolescent Medicine Program at the Janeway Children's Health and Rehabilitation Centre in St. John's, N.L., says admissions are up there, too.

Dr. Anna Dominic says the wait-list for assessments of medically stable patients is now seven months, when it's typically two to three months.

Over at CHEO, Murphy says the hospital would not turn away anyone approaching its 45 bpm threshold, but he says the very fact they require such a stark cutoff -- introduced before the pandemic -- speaks to how dire the situation is.

Demand is so high, CHEO also denies 73 per cent of referrals -- up from 49 per cent from the year before.

Murphy admits that means many very sick and starving youngsters are forced to look elsewhere for help, and risk deteriorating further while seeking care. He knows of at least two community-based services with 18-month wait-lists.

Maharaj says eating disorders thrive in isolation and so it's important for struggling youngsters to know they are not alone and can turn to a growing number of remote resources. He says hospitals, community groups, therapists, dietitians and others have embraced online options to reach more people.

"It's so easy to fall into this pit of despair, of hopelessness, if you think that it's never going to change and there's nothing out there for you," says Maharaj.

"There are virtual ways that we can try to connect and provide some kind of support so you're not just sitting there spiralling on your own."

Murphy says the issue has always been under-resourced, and the pandemic has highlighted that problem.

"When we talk about mental health, we think of depression, suicide, schizophrenia. It's all of those acute mental illnesses, but then there's this thing called eating disorders," he says.

This report by The Canadian Press was first published Jan. 20, 2021.