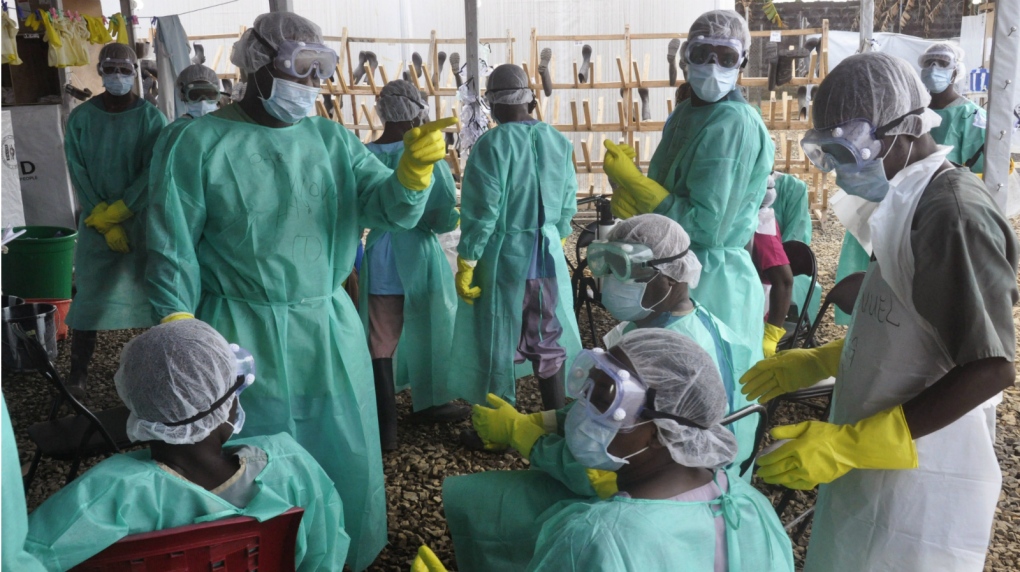 Health care workers inside a USAID, funded Ebola clinic with their Ebola virus protective gear in Monrovia, Liberia, Jan. 30, 2015. A new vaccine for the deadly disease is being launched in Monrovia today. (AP / Abbas Dulleh)

MONROVIA, Liberia -- Large-scale human testing of two potential Ebola vaccines got under way in Liberia's capital Monday, part of a global effort to prevent a repeat of the epidemic that has now claimed nearly 9,000 lives in West Africa.

Yet even as Liberians volunteered to take part, it remains unclear whether either vaccine ultimately will work, and if so how quickly they could be mass produced. There is currently no licensed treatment for Ebola, a ghastly virus that has killed at least 60 per cent of even its hospitalized victims.

The studies in Liberia are taking place after smaller tests determined that the vaccines were safe for human use. By comparing them now with a dummy shot, scientists hope to learn whether they can prevent people from contracting the disease.

Despite the vaccine study's promise, authorities must combat fear and suspicion that people could become infected by taking part. Each vaccine uses a different virus to carry non-infectious Ebola genetic material into the body and spark an immune response.

On Sunday in one densely populated neighbourhood of Monrovia, musicians sang songs explaining the purpose and intent of the trial in a bid to dispel fears.

B. Emmanuel Lansana, 43, a physician's assistant, was the first to receive doses on Monday. Two shots were administered at different points on his right arm. His wife had expressed apprehension about the vaccine trial, but Lansana said he still wanted to take part.

"From the counselling, all of the reservations I have were explained, my doubts were cleared," he said in a room where he was being observed for 30 minutes afterward.

Up to 600 volunteers are taking part in the first phase, and trial organizers have said eventually as many as 27,000 people could take part.

"We are targeting about 12 persons for today and hopefully the number will increase as we go along," Wissedi Sio Njoh, director of operation with the vaccination campaign, told The Associated Press.

The World Health Organization says the Ebola epidemic has infected more than 22,000 people and claimed more than 8,900 lives over the past year. Without a vaccine, officials have fought the outbreak with old-fashioned public health measures, including isolating the sick, tracking and quarantining those who had contact with them, and setting up teams to safely bury bodies.

The vaccines being tested won't be an immediate solution, said Bruce Aylward, who is leading WHO's Ebola response.

"People keep saying we're going to have a vaccine, but that will be in the middle of the year at the earliest," he said last week. "We might be able to vaccinate some first responders but it's a complete uncertainty. We have no idea if it will confer protection, even though the indications are good."

Both experimental vaccines showed promise in first-stage human safety tests, Dr. Anthony Fauci, director of the U.S. National Institute of Allergy and Infectious Diseases, has said. One was developed by the National Institutes of Health and is being manufactured by GlaxoSmithKline. The other was developed by Canadian health officials and is licensed to two U.S. companies, NewLink Genetics and Merck.

The vaccine trials come as the three most affected countries -- Guinea, Sierra Leone and Liberia -- appear to be making strides against the Ebola epidemic first identified last March. The UN health agency said last week that the countries had reported fewer than 100 cases in the past week, for the first time since June.