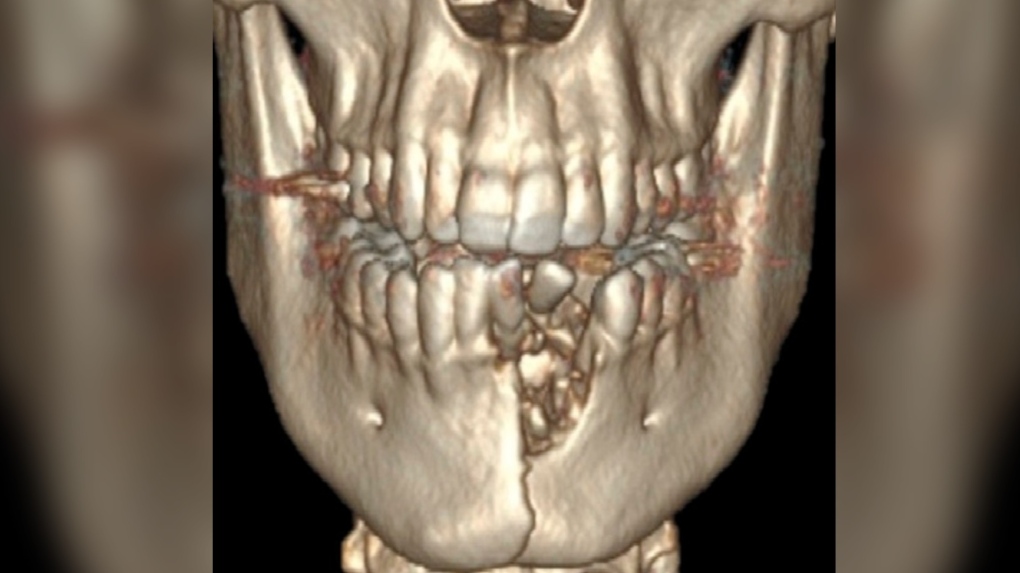 A 17-year-old boy in Utah was treated for a circular puncture wound to the chin, extensive deep cuts in his mouth, bone damage to his lower jaw and dislodged lower teeth caused by an exploding e-cigarette. (The New England Journal of Medicine)

WARNING: This story features images that some readers may find disturbing

A teenager was rushed to hospital with horrific injuries after an e-cigarette exploded in his mouth shattering his jaw and dislodging his teeth.

The 17-year-old boy was treated for a circular puncture wound to the chin, extensive deep cuts in his mouth, bone damage to his lower jaw and dislodged lower teeth, according to a report in The New England Journal of Medicine.

Doctors in Utah worked to fix the jaw fracture, removed teeth and other tissue.

But the patient, who wasn’t named in the study, needed a dental plate put under his lower gums to stabilize his jawbone, Dr. Katie Russell from the University of Utah Health Care, told Live Science.

His mouth still wouldn't close properly, so doctors wired his jaw shut for six weeks to give it time to heal, Dr. Russell, who treated the patient, said.

“The increasing prevalence of vaping among adolescents is a public health concern,” Dr. Russell wrote in the report.

“At the six-week follow-up assessment, the patient had recovered well.”

There were 32 reported cases of injuries or poisonings related to vaping products including e-cigarettes between January 2013 and August 2018 in Canada, according to government figures.

Seventy-eight per cent of the injuries reported were poisonings from ingesting vaping liquid, 92 per cent of which were among children aged four or younger.

Nine per cent of the remaining patients were burned from e-cigarettes exploding or catching fire.

More than 60 per cent of the patients injured were male and eight-out-of-ten of the injuries happened in the home.