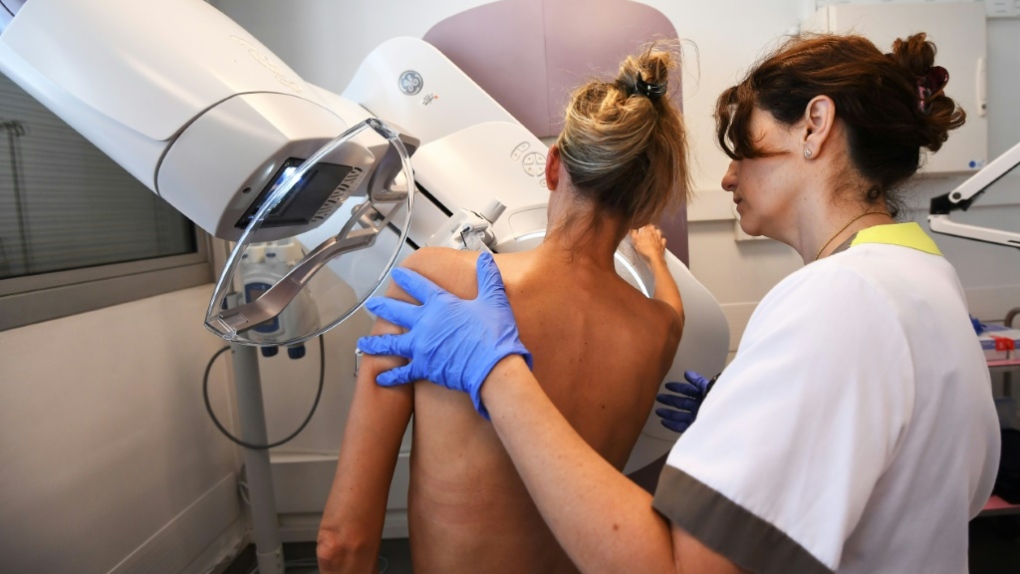 A patient undergoes a mammogram to detect early signs of breast cancer. (AFP)

TORONTO -- As more Canadians receive COVID-19 vaccines, more and more people might encounter a side-effect that radiologists want the public to be more aware of — swelling under the armpit, which can show up on mammograms during screenings for breast cancer.

Doctors are hoping that talking about it now will prevent people from assuming the worst if they notice a new lump in this area after receiving the vaccine.

With breast cancer screenings already delayed across the country due to the pandemic, “it’s important for people not to panic,” Dr. Jean Seely told CTVNews.ca in a phone interview.

Seely is the head of the breast imaging section at the Ottawa Hospital, and is the president of the Canadian Society of Breast Imaging.

She became aware of this side-effect after reports started emerging out of the U.S. of people who had received their COVID-19 vaccine, and then noticed new lumps in their armpit or collarbone area in the weeks that followed.

In a pre-pandemic world, a new swelling in the armpit region would be extremely worrisome. And while this side-effect is not dangerous, there’s no way for doctors to tell the difference on a mammogram between these lumps and the kind that would warrant a biopsy.

“They look the same, they're swollen and they're new from when we compare to previous tests,” Seely said. “So normally, that would be a sign of cancer if we see new swelling of the lymph nodes in the armpits.”

Seely said one of her own patients came in with swollen lymph nodes in January, worried about what the new swelling could mean.

Because of the reports Seely had heard of this being correlated with the vaccine, she asked the right questions, and found out that the patient had received the vaccine only a week prior — and her swollen lumps were in the armpit of the same arm that she’d received the shot in.

“So based on that, I was able to reassure her that this was very likely a side-effect of that vaccination,” she said.

They ran more tests to be sure, and by the time the patient returned for a follow-up three weeks later, the swelling had already disappeared on its own.

THE WHY BEHIND A SIDE-EFFECT

According to an advisory released in January by the Society of Breast Imaging, roughly 11 per cent of people experience this side effect after their first shot of the Moderna vaccine, with around 16 per cent experiencing it after the second shot. Cases of this side effect were also reported among those who received the Pfizer-BioNTech vaccine, but the exact percentage is unknown.

As Canada’s vaccine rollout moves along, this could mean thousands of Canadians experiencing an unexpected swelling of their lymph nodes.

“We've definitely seen some additional people at the Ottawa Hospital who have had a reaction with swelling of the armpit that has been showing up on their screening mammogram and on screening MRIs as well,” Seely said.

“I don’t think we’ve seen the full extent of it yet.”

That the vaccine may trigger this swelling isn’t a concern on its own. Lymph nodes are part of the body’s immune system, and help filter out bacteria and viruses.

But radiologists are worried that if people aren’t warned of this side-effect, they could jump to assuming the worst. And if imaging specialists aren’t aware, it could lead to more complications.

“We want to make sure that people avoid unnecessary biopsies,” Seely said.

Swollen lymph nodes in the armpit would show up on any CAT scan of the chest, as well as ultrasounds and MRIs of that region, not merely on mammograms done during breast cancer screenings.

In February, the Canadian Society of Breast Imaging and the Canadian Association of Radiologists put out a joint statement advising doctors on how to manage this new hurdle.

In the statement, they recommended that screenings be scheduled around vaccines if possible.

“We stopped screening worldwide, basically, in March of last year, because of the pandemic,” Seely said. “We didn't know at that time the best ways to maintain a safe imaging. So that stopped for about three months. And so we had to delay thousands. In Ontario there are over 300,000 women who've been delayed for their screening last year.”

More than 24,000 patients are still waiting for their routine screenings in Ottawa. These backlogs could be deeply harmful for patients who have developed cancer and are unaware.

When doctors were able to resume screenings in June with new protocols in place to ensure it could be done safely during the pandemic, they started “screening nonstop”, Seely said.

However, the added cleaning and safety procedures add time, slowing the process of catching up on delayed screenings.

“We're doing evenings, we're doing weekends, where we're trying to catch up with that screening backlog, but there's a lot of backlog to catch up on.”

The response for radiologists to this vaccine side-effect varies by province, region and hospital, Seely said. Some areas are so behind on screenings because of the pandemic that they are scheduling as usual, and just recording whether or not the patient had recently received the vaccine to have the information on file.

Other regions, despite dealing with their own delays in screenings, are trying to follow the new recommendations, including Ottawa.

They’re also asking any patient booked for a screening mammogram, CAT scan, MRI or ultrasound whether or not they’ve had a COVID-19 vaccine.

Although it adds challenges to scheduling, Seely is glad that awareness of this vaccine side effect is spreading. If doctors and patients didn’t know the vaccine could cause some swelling, it could lead to an influx of frightened people and “false positives”.

“What would have only made the situation even more difficult is if we had many more patients who needed biopsies or more additional diagnostic imaging,” Seely said.

She said that with patients they’ve had who’ve experienced this side-effect, it was resolved within three to four weeks. At six weeks after the vaccine shot, all side-effects should be fully gone, so if a patient was still experiencing mysterious lumps after that, that would be concerning.

“Anything longer than that, we would definitely want to make sure that there was no cancer,” she said.

Although she wants people to be aware that a new lump associated with receiving the vaccine isn’t a cause for panic, Seely said she wants to emphasize that people should still be trying to get screenings even during the pandemic.

“I think it's really important for people to be reassured this is not going to interfere with our ability to diagnose cancer,” she said, “and that they should really not hesitate to get their regular checkups.”

'COVID-19 is essentially everywhere': Thunder Bay, Ont. is one of the leading hotspots in Canada

Not all COVID-19 transmission will be stopped by vaccines, B.C.'s top doctor warns as care home records new outbreak

Why the 'grief pandemic' might outlast the worst of COVID-19