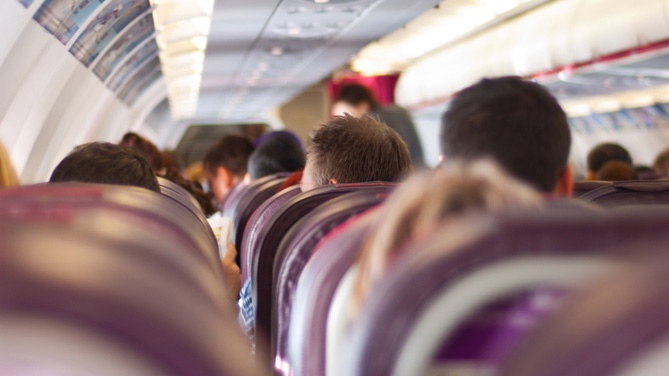 Dr. Alan J. Hunter from Oregon Health and Science University was a passenger on a recent flight, when shortly after reaching cruising altitude, he responded to a flight attendant’s appeal for a “doctor on board.”

According to a case report in the Annals of Internal Medicine, the attendant suspected the young male passenger was having a stroke and Hunter found him suffering from sudden-onset headache with ear pain, slurred speech, drooling and a complete right-sided facial droop.

The man had lost his forehead wrinkles and could not close his right eye, but had no mental symptoms and still had his physical strength.

When the man reported that he had recently recovered from a cold and that his symptoms began during ascent, Hunter determined that there was no need for an emergency landing.

According to Hunter, the man’s condition was facial barotrauma, which occurs during ascent in scuba divers and infrequently while flying, during land travel at high altitudes, after certain operations on the middle ear and with some structural disorders of the middle ear.

“He reported no changes in vision, swallowing, or taste. His condition seemed consistent with acute Bell palsy,” Hunter wrote.

“I asked him to breathe oxygen-enriched air and to perform manoeuvres to relieve any excess pressure in his ears, such as swallowing and yawning.”

The man’s symptoms were caused by declining atmospheric pressure in the cabin causing a relative increase in middle ear pressure from a blocked Eustachian tube that was transmitted to the branches of the seventh nerve as they ran through his middle ear.

When Hunter reassessed the man after 15 minutes, his ear had popped and he was feeling better. Another check-up a few minutes later found his signs and symptoms had completely resolved.

The paralysis usually resolves within 15 to 30 minutes after manoeuvres to reduce middle ear pressure, such as yawning, swallowing with pinched nostrils and the Valsalva maneuver, usually done by closing one’s mouth, pinching the nose shut while expelling air as if blowing a balloon.

“It is really difficult to know how ‘common’ this disorder is in the aviation industry, as most literature has been case reports and case series,” Hunter told CTVNews.ca in an email.

“Likely it is more common that we realize, and many milder and transient cases aren’t even recognized or reported.   It is still rare, but far more recognized in professional and recreation scuba divers.

“Absent a (often prohibitively expensive and logistically daunting) population analysis it is very hard to know the true incidence, prevalence or other words how truly ‘common’ (or uncommon) conditions actually are.”