'Distracted walking' a serious issue, say most, but few admit to doing it 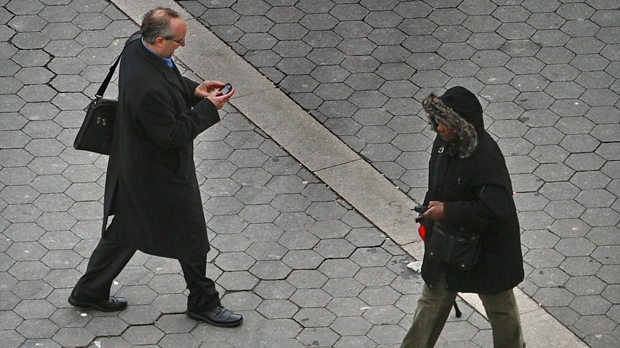 WASHINGTON - You might think you can safely walk and text on your smartphone at the same time. But watch out for the other guy.

A study released Wednesday by the American Academy of Orthopaedic Surgeons found 78 per cent of U.S. adults believe distracted walking is a "serious" issue but only 29 per cent say it's a problem for them.

Most of those surveyed agreed that distracted walking -- which could involve talking, listening to music or texting on a handset -- is "dangerous," yet 31 per cent were likely to do so anyway, confident in their multitasking abilities.

The association pointed to a 2013 study showing a sharp increase in pedestrian accidents between 2004 and 2010, with mobile phone use a key factor in the rise.

The message however does not appear to be getting through to smartphone users, and many Americans appear to take the position that "it's not me, it's you," according to the academy.

The survey found Americans are confident in their ability to multitask. When asked why they walk distracted, 48 per cent said "they just don't think about it," 28 per cent feel "they can walk and do other things," and 22 per cent "are busy and want to use their time productively," the survey found.

New York City residents were most likely to view distracted walking as a serious issue (86 per cent). But the city also had the highest number (39 per cent) of people who said they walked and used their phones simultaneously.

"Today, the dangers of the 'digital deadwalker' are growing with more and more pedestrians falling down stairs, tripping over curbs, bumping into other walkers, or stepping into traffic causing a rising number of injuries -- from scrapes and bruises to sprains and fractures," said Alan Hilibrand, a spokesman for the association.

"Many of us simply need to force ourselves to set down our devices and focus on what's in front of and around us."

The survey conducted by the polling firm Ipsos queried 2,008 U.S. adults between Oct. 8 and 20, and had a margin or error estimated at 2.5 percentage points.