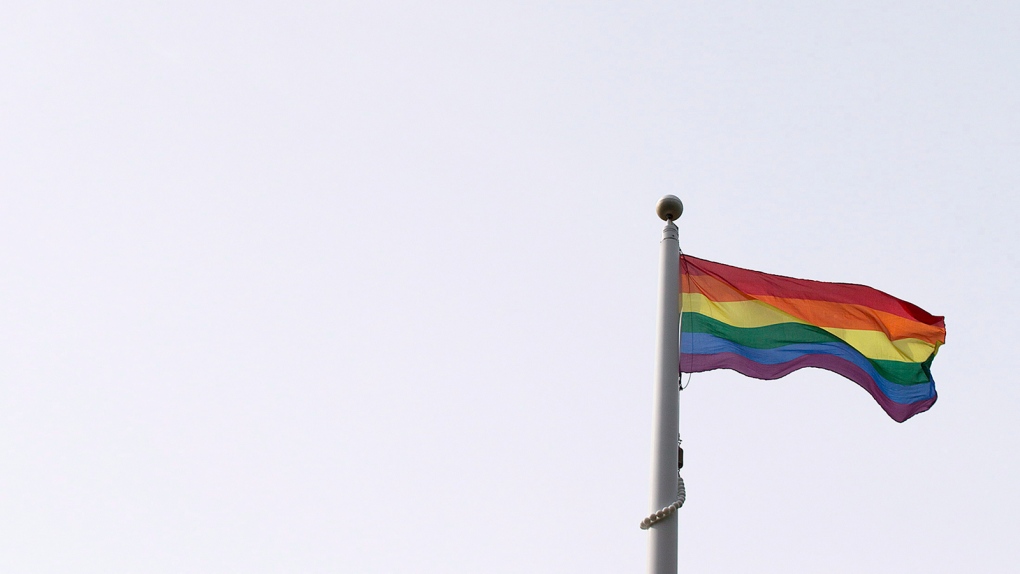 A Pride flag is raised during a ceremony at Queen's Park in Toronto on Monday, June, 23, 2014. (Michelle Siu / THE CANADIAN PRESS)

TORONTO -- For 85-year-old Alf Roberts, Canada's largest gay pride festival is a chance to celebrate an identity he only felt comfortable sharing in his old age.

"At last, after all these years I don't have to be careful when people ask me if I'm gay," Roberts said. "I just say yes, I am."

Roberts came out when he was 80, shortly after moving into Fudger House, a long-term care facility for seniors in Toronto.

"I was a church organist for years and a music teacher, and you are very careful in those positions," he said. "You don't want everybody to know."

For most of his life, Roberts would remain vague about his identity, responding "I am who I am," when people asked him if he was gay.

Then, relief came when he realized that Fudger House touted a gay-positive environment.

Bill Ryan, a social worker and professor at McGill University, said it's rare to be openly gay in a seniors home.

Ryan, who has conducted research on the elderly lesbian, gay, bisexual and transgender community for more than a decade, said stigma persists because residents in seniors homes lived in an era when homosexuality was considered a criminal act or mental illness.

"They grew up at a time when the only coping strategy that was allowed to them was to hide and camouflage themselves," Ryan said, adding that most seniors don't have the benefit of political activism over the last 30 years.

He added the baby boomer generation will be entirely different when they enter long-term care facilities.

"Those growing into their 50s and 60s would go to the courts and tribunals to claim their rights," he said.

During his research on long-term care facilities, Ryan heard from one gay couple who would go into the senior centre's bathroom to hold hands instead of showing affection in front of centre staff.

"He would visit during non-family visiting hours, and he would take his partner out of bed, help him into the bathroom and close the door behind him. Then they would hold each other for as long as they could and hug, and then he would open the bathroom door, put him back in bed, and not touch him again.

"It's a powerful metaphor of what a lot of people experience," Ryan said.

He added that the cohort of LGBT seniors in long-term care are particularly vulnerable, and are at higher risk of isolation and depression.

"The generation of those who haven't had HIV or AIDS are dealing with a lot more isolation because many of their friends have died," he said.

Donna Turner, spokeswoman for Rainbow Health Ontario -- an organization that focuses on the health of the LGBT community --said changing the culture in seniors homes is an "uphill battle."

Her organization is one of several that provides training to staff members in the hopes of quelling discrimination across Ontario.

"Long-term care facilities are particularly tough because there are some people who might already have pretty strong convictions, whether it's residents or staff," she said.

For the most part, care centres will ask for training after there has already been a "negative incident," she said.

And while seniors homes in urban areas such as Toronto may be LGBT-friendly, she said, that's not the reality across Canada.

Marie Robertson has been a counsellor and an activist for the LGBT community for more than four decades.

As a senior herself, Robertson, 61, said she has a "vested interest" in training staff to be LGBT-friendly at Canada's senior care centres.

"So that when my generation needs care, we're not going in the closet to access service," she said, adding that she helps to train people in Ottawa.

Robertson said members of the elderly LGBT community lived most of their lives facing high risks of personal and professional discrimination.

"It was a very frightening time," she said. "Even in the last years of their lives, these people will die there and stay in the closet. That just breaks my heart."

She added that while "some of this is their mind-set," homophobia is still a problem in many seniors homes.

In the United States, this has led to the creation of centres marketed specifically to the LGBT community, however Robertson said in Canada that would be "a fantasy."

She added that instead of isolating LGBT seniors, the answer is to address discrimination head on.

"I've been paying taxes all my adult life, and my taxes have gone into building the facilities that exist today," she said.

With World Pride in Toronto wrapping up in a rainbow haze of revelry, Fudger House will be one of many organizations in Sunday's parade.

Roberts -- who has ridden in the parade since he came out at 80 -- said it's a chance to celebrate being true to yourself.

"If there are any young people who have someone they can talk to, they shouldn't be afraid to come out," he said. "That's the message."