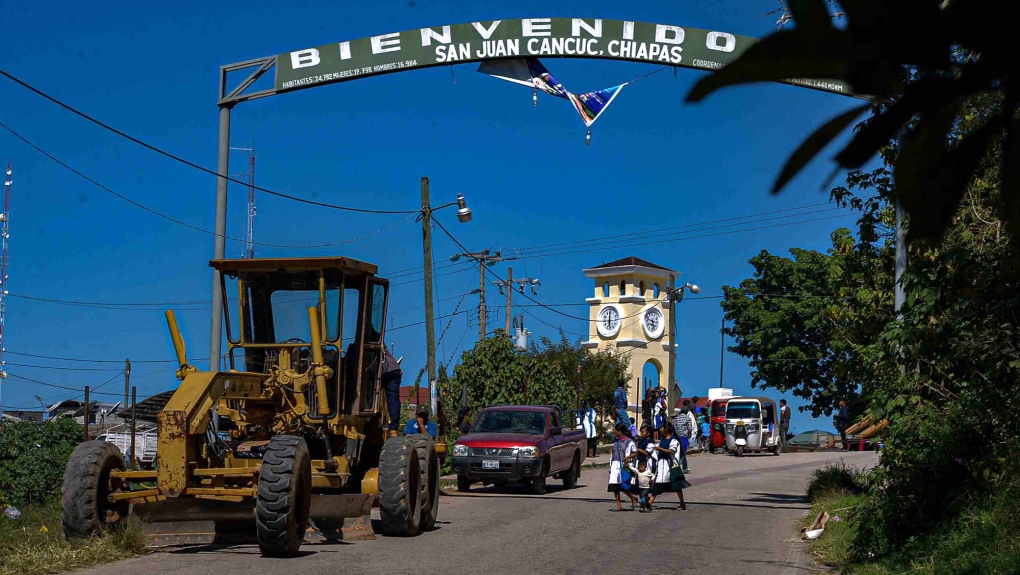 A view of daily life in the indigenous town of San Juan Cancuc, in the state of Chiapas, Mexico, on February 7 2021. Carlos Lopez/EPA-EFE/Shutterstock

For Mexican President Andrés Manuel López Obrador, vaccinating all Mexicans is a matter of responsible national health policy as well as social justice.

"Vaccines will start arriving little by little," he said on February 15, during his daily morning press conference, a week after returning to public activities after contracting COVID-19.

"Today we launched our vaccination plan and it won't stop. We will press ahead with the goal of vaccinating all the people, according to pre-established priorities," Obrador added.

But there are already clear signs that not every Mexican is ready or willing to get a shot in the arm.

In Aldama, a small town of about 7,000 located in the central highlands of the southern Mexican state of Chiapas, some people say they will not get vaccinated, regardless of any vaccination plan or where the vaccine comes from.

"Why would I get vaccinated? I'm not sick. It wouldn't be good if they tried to force us to get vaccinated. I don't know," said María Magdalena López Santís, an Aldama resident to CNN in broken Spanish.

Indigenous communities like Aldama have a history of mistrust toward the federal government. In the best of cases, community leaders say, they have been ignored. In the worst of cases, they've been subjected to land-grabs, discrimination, abuse and attacks. This time, it seems a lack of information and conspiracy theories that have spread in the region like wildfire are to blame for vaccine hesitancy.

Tomás López Pérez, Aldama's town secretary, told CNN that people there, including himself, strongly believe vaccines can do more harm than good.

"People are not well informed regarding this. Since we don't really know what vaccines are made of, we believe that they contain the [COVID-19] virus and that's the main reason why people don't want to get vaccinated," López said.

Since many people in those towns communicate in their native dialects, government information about its COVID-19 pandemic strategy gets, in many cases, lost in translation.

But in a way, Aldama has also been fortunate. Its residents, mainly Tzotzil Mayans, rarely travel to big cities and very few people ever visit, sparing the town the worst of the pandemic -- and meaning that many residents don't see a need to be vaccinated.

Local officials proudly assert that no one here has been infected by the coronavirus, though health officials could not confirm that claim. Nevertheless, the town did shut down for several months, at the same time the federal government imposed restrictions throughout the country.

"Fortunately, we have our ancestral way of thinking regarding traditional medicine and we asked our grandparents and great-grandparents for guidance and that helped us a lot," López said.

Indigenous towns like Aldama are autonomous. The Mexican constitution allows towns like these to rule themselves under the principle of "traditions and customs."

As of 2018, there were 421 municipalities in Mexico with this designation out of a total of 2,469 (17%). And it is not the only town in southern Mexico where people are refusing to get vaccinated.

Earlier this month, José López López, mayor of San Juan Cancuc, another indigenous town located in the Chiapas central highlands, sent state health authorities a letter, informing them of his municipality's decision to refuse any vaccine.

In the letter, López writes that the municipality of 24,000, composed of 45 communities, held a meeting in late January in which town elders decided that "the vaccination campaign will not be allowed." The letter also talks about "benefits and possible adverse effects" of the vaccine.

The Chiapas State Health Department responded that it respects the autonomy of the original populations, although officials insisted that they will continue to promote dialogue with those communities for the sake of everybody's health.

Chiapas Governor Rutilio Escandón has recently focused on discrediting conspiracy theories and falsehoods about the COVID-19 vaccine. "I ask the people of Chiapas not to fall prey to the lies of those trying to take advantage of a health emergency, those who are selling 'vaccines' on social media. Vaccines are not privately available. They are free and will be available for everybody," Escandón said on Twitter.

Asked specifically about the Chiapas indigenous communities' refusal to vaccinate during his morning daily press conference, President López Obrador emphasized that no one will be forced to take the coronavirus vaccine.

"Everything is voluntary," the president said. "I repeat: nothing by force, but everything by reason and rights. [We must] convince, persuade, inform, orient, make aware, without imposing anything."